After Renault, Who’s Next to Pull Back From China Car Market? 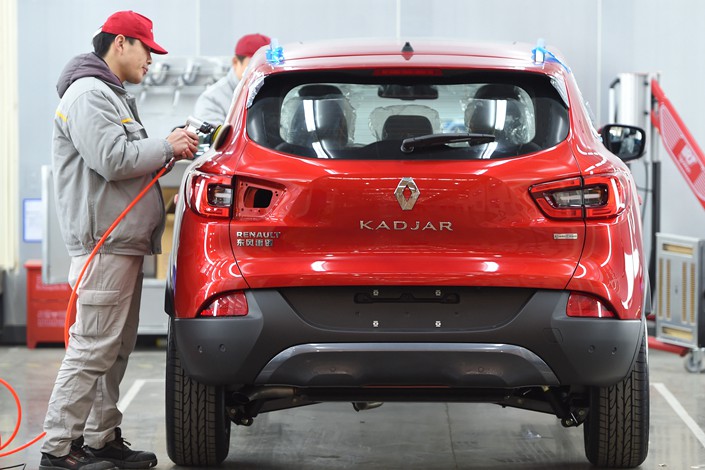 Workers on an assembly line at a Dongfeng Renault auto plant in Wuhan, Central China's Hubei province, in October 2016.

Renault said on Tuesday it was selling out its 50% stake in its main car manufacturing joint venture in China with local partner Dongfeng Motor Corp., ending a seven-year marriage that had recently seen sales plunge. Others with similarly poor performances could follow, observers said, with names including France’s Peugeot SA and a Ford joint venture in the city of Chongqing posting equally sharp sales drops last year.

Dongfeng Renault’s sales tumbled 63% to just 18,548 vehicles last year, amid a broader slump for a Chinese auto market that started contracting in 2018 and shrank more than 8% last year after nearly three decades of solid growth. Dongfeng Renault’s downward spiral accelerated to a nearly 90% sales decline in the first quarter of this year at the height of the Covid-19 outbreak, with just 663 vehicles sold in the three-month period.

“Major disruptions to the auto industry, such as what we’re seeing now, tend to force the hand of companies who have been putting off tough decisions,” said Stephen Dyer, an auto analyst at Alix Partners. “When conserving cash and placing bets only in markets and segments that companies have a real chance of winning becomes of the utmost importance, then we will tend to see such decisions to exit a market. It is always a tough choice to leave the largest auto market in the world. But, these times required life or death decisions.”

Renault itself stressed that its decision to sell out its Dongfeng joint venture stake doesn’t mean it is leaving China, the world’s largest auto market. It said it will continue to focus on electric and light commercial vehicles in the market, in part through its three other smaller joint ventures in the country.

“Renault is serious about staying in the Chinese market,” said Wang Cun, vice director of the China Automobile Dealers Association. “However, it has made a strategic adjustment in light of fierce market competition, lack of consumer recognition for its products and serious operating losses, just as the broader car market is contracting.”

Renault’s Dongfeng joint venture was approved in 2013 and has a registered capital of 4.7 billion yuan ($667 million). It began selling its first model in 2016 and as recently as 2018 announced plans to domestically develop a line of cars with an aim of having nine models and annual sales of 400,000 by 2022. To date, the joint venture has introduced four such domestically developed cars, three gas-powered and one electric.

The venture was hit particularly hard during the Covid-19 outbreak, since Dongfeng is based in the city of Wuhan, capital of Central China’s Hubei province, where the epidemic began. While other businesses around China began to reopen in February, Dongfeng’s operations didn’t start coming back online until March 11.

More foreign joint ventures that have been fading in China in recent years and “lost relevance to the consumers and dealers” could be the next to go, Dyer said.

“Certainly, it is likely to be a time in which many Chinese auto players get shaken out,” he said. “However, I would not be surprised to see other multinational brands decide to either exit or do business in a very different way that focuses on their strengths and slows them to retain some presence in China.”