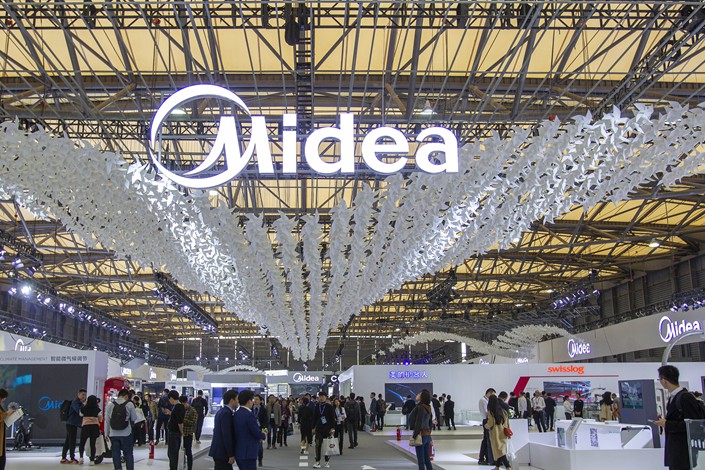 Midea’s earnings release shows that the company was on track for robust growth in the first three quarters of 2019.

As Chinese home appliance-makers are struggling to survive the economic blow of the coronavirus, one of the industry’s biggest players has made many of its senior executives take a 30% pay cut until December as a countermeasure, Caixin has learned.

An internal Midea Group Co. Ltd. document reviewed by Caixin shows that the 30% monthly salary suspension will apply to all high-level Midea employees including the chairman and vice presidents of the group, presidents of business units, directors of functional departments, and others. The policy will be effective through December, and the Shenzhen-listed company will review the performance of the group and its units at the end of the year to decide whether to pay out the suspended salaries.

The internal document was issued April 10 by chairman Fang Hongbo, and the policy will affect more than 100 senior managers, multiple Midea employees confirmed with Caixin.

Fang had sent an internal letter on Feb. 7 to all staff when the outbreak had not yet turned into a pandemic, saying that although the start to 2020 had been exceptional challenging, Midea will plan with a long-term mindset and no employees would face layoffs or pay cuts. The manufacturer resumed production on Feb. 10, and its capacity has now almost recovered to pre-outbreak levels.

The latest decision seems to overturn the chairman’s promise two months ago, but in a response to Caixin on Tuesday, Fang said the pay suspension is meant to “put some pressure” on the company’s core managers, including himself, and does not conflict with the February letter.

He also reaffirmed the “no layoff” policy mentioned in the internal letter, but added that for 2020, “survival is the most important thing.”

Midea’s earnings release shows that the company was on track for robust growth in the first three quarters of 2019, as net profits attributed to shareholders of the parent company increased 19% year-on-year to 21.3 billion yuan.

But like in many other sectors, the past quarter has seen a slump in sales for most household appliances. Retail sales of refrigerators, washing machines and air conditioners dropped by 28%, 36%, and 58% respectively in the first quarter of 2020, according to market data provider All View Cloud (AVC).

The situation has not made a turn for the better even as China recovers from the outbreak. As the pandemic swept the globe in March, many overseas clients have canceled or suspended their orders, according to a source who works in the export department of Midea’s air-conditioner unit.

The Guangdong-based giant is certainly not the only appliance industry group struggling. Caixin reported on Monday that Shandong-based home appliance-maker Hisense Group will lay off more than 10,000 people by the end of May, with its senior executives slashing their own salaries to cut costs.

Midea's share price closed down 0.55% at 50.20 yuan Wednesday in the domestic stock market.