Opinion: How the IMF Can Help the Developing World With Covid-19 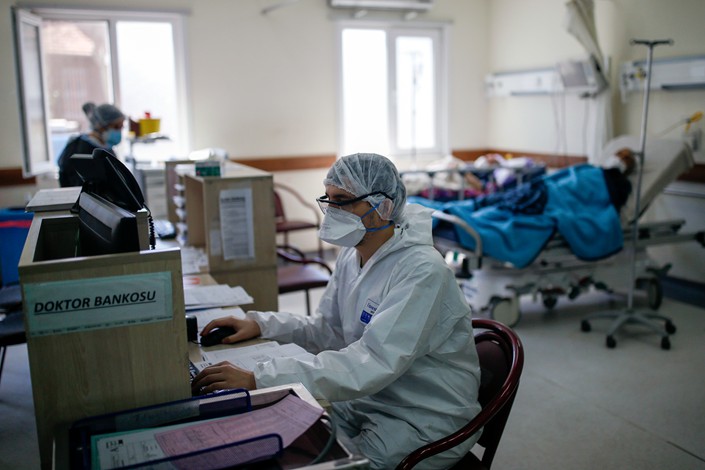 A medical professional examines an X-ray of a patient’s lungs at a hospital in Istanbul on Monday.

The U.S., Europe and China are understandably preoccupied by their own public health and economic crises. Quirks of timing and international travel have caused Covid-19 to spread amongst them before infecting the developing world. But the crisis is now reaching emerging and developing economies. And the effects will be devastating.

Most immediately, there is the public health crisis. Turkey and South Africa are currently showing the fastest rates of growth of infections. Poorer developing countries, once infected, will experience even steeper curves. Those poor countries have weak public health systems. They have meager stockpiles of emergency equipment. Some have large populations with impaired immune systems. With people living close to the margin of subsistence, lockdowns are more costly and less likely to work. For evidence, one only needs to look to India.

Supplying these countries with masks, gowns, ventilators, tests and, hopefully, vaccines is about to be the world’s most urgent humanitarian task. China has provided Italy, among other countries, with emergency medical equipment. It needs to turn its attention to Africa, the Middle East and South Asia U.S. President Donald Trump has promised to send U.S. supplies to other countries. We will see.

Then there is the hit to economic activity. A large contraction in exports is coming. Oil revenues are falling. Remittances are cratering. Countries that rely on tourism, such as Thailand, are seeing major falls in income.

Until the virus is under control, little can be done about these immediate economic problems. What can be done is to address the financial fault lines that are aggravating the crisis. The availability of foreign finance to developing countries has been curtailed, and foreign capital being repatriated big time. Capital outflows from emerging and frontier economies are running at twice the rate following the bankruptcy of Lehman Brothers in 2008, and this exodus is accelerating. Rather than expanding the provision of essential social services, governments with deficits to finance and debts to roll over are being forced to compress humanitarian spending.

Meanwhile, a sudden inability to access trade credit, which is disproportionately denominated in dollars, is crushing these countries’ ability to export. Governments can depreciate their currencies to make their exports more competitive, but doing so will only make their dollar debts more burdensome. They can impose controls to stem capital flight, but this will not give them access to additional finance.

Here the IMF, the multilateral development banks and bilateral creditors need to step up. Official creditors should suspend interest and amortization payments on their bilateral loans. Those loans are long term. They can be held on the creditors’ balance sheets, since in most cases arrears will be paid off eventually. In some instances, official bilateral loans may have to be written down, but we know how to do this. A streamlined version of the IMF and World Bank’s Highly Indebted Poor Country (HIPC) initiative of 1996 would do the trick.

The official debts in question should include overseas development loans extended by the U.S. government. They should include loans extended by China for its Belt and Road Initiative. A Chinese moratorium on official bilateral debt would be of immensely greater value than a few airplanes delivering masks and swabs. Such a moratorium would also enhance poor countries’ access to additional finance, since other governments won’t donate funds if they think that these will just end up paying off China.

In addition, governments can display international leadership by spearheading the drive to ramp up the emergency lending capacity of the IMF and World Bank. World Bank lending is constrained by its capital. But in addition to capital in place, the World Bank has so-called callable capital: capital commitments that members promise to contribute at a later date. China should ask that the World Bank be authorized to lend against this callable capital now.

The IMF’s capacity to lend could be bulked up by doubling its New Arrangements to Borrow immediately, not just at the end of the year, as currently scheduled. In addition, the IMF can provide resources to its members at the stroke of a pen by issuing Special Drawing Rights, or SDRs. Ten years ago, during the global financial crisis, members agreed to an emergency allocation of $250 billion SDRs. This crisis being immensely greater, $1 trillion of SDRs would not be out of line. This alone would give poor African countries 10% of their GDPs, which they desperately need.

China may be reluctant to go down this road because IMF governance has still not been reformed to adequately reflect the country’s weight in the world. But IMF reform is an issue for another day. The best way for China to acquire the leadership role it deserves is to display that leadership now.