Bank of Gansu Moves a Step Closer to State Bailout 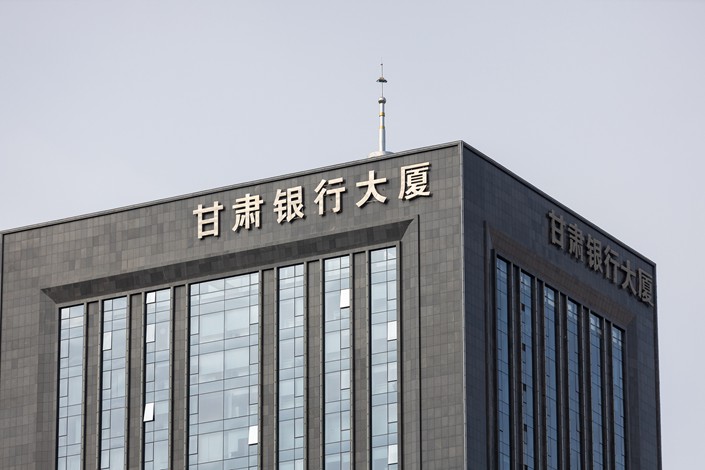 Embattled regional lender Bank of Gansu Co. Ltd. has published more details of a state-led bailout that will see entities owned by the Gansu provincial government provide most of the funds to recapitalize the bank.

The Hong Kong-listed bank, whose net profit was almost wiped out last year by losses on soured assets, announced in March that it planned to issue up to 3.75 billion new yuan-denominated shares, or “domestic shares,” and up to 1.25 billion Hong Kong dollar-denominated H-shares to shore up its weakened balance sheet. The pricing of the new shares, which will be sold in a private placement to selected investors, has yet to be disclosed, but based on Tuesday’s closing price, the bank could raise as much as HK$4.3 billion ($555 million).

Gansu Highway Aviation Tourism, a wholly owned subsidiary of Gansu province’s transport department, is currently the bank’s biggest shareholder with a direct stake of 11.49% and an indirect stake of 1% through Gansu Financial Capital Management Co. Ltd., its wholly owned subsidiary. It intends to subscribe for 40% of the new yuan-denominated domestic shares, which will take its stake up to 18.3%, Bank of Gansu said in a stock exchange filing on Friday.

Gansu State-owned Assets Investment Group Co. Ltd. (GSAIG), a financial vehicle of the provincial government that manages state capital, raises financing and carries out restructuring, is currently the bank’s fifth-biggest shareholder with a 3.57% direct stake. It will subscribe for about 41.3% of the 3.75 billion new yuan-denominated shares, increasing its direct holding to 12.67%, according to the filing. The group’s indirect holding will also increase because it holds stakes in two other existing shareholders, all state-owned enterprises, who are also subscribing to the private placement.

Two other state-owned companies – Jiuquan Iron and Steel (Group) Co. Ltd., an industrial conglomerate, and Jinchuan Group Co. Ltd., a metals and chemicals producer – both currently have stakes of 6.3% which will rise to 6.53% after they each subscribe for about 9.33% of the new yuan-denominated shares.

The bank said the proceeds will be used to replenish its core Tier-1 capital, ensure continuing compliance with regulatory requirements, enhance the bank’s resilience to shocks, shore up market confidence and optimize its equity structure.

Friday’s filing did not give details of the planned H-share issue, but the bank said that the proportion of its total share capital held by public holders of H-shares would remain almost unchanged at just over 25% after the placement.

A rescue strategy for the bank was approved earlier this month by the government of Gansu, a relatively poor and sparsely populated province in northwestern China that accounts for less than 1% of the country’s gross domestic product.

The bank will hold its annual general meeting on June 3 followed by a separate extraordinary general meeting and a meeting of H-share holders to approve the private placements, according to separate filings on Friday.

Bank of Gansu issued its 2019 annual earnings report on March 30, which laid bare its mounting problems. Operating income fell 18.5% to 7.23 billion yuan as tougher competition and rising borrowing costs cut into the profit it earned on lending to customers. Net profit crashed 85.1% to 511.3 million yuan after impairment losses on assets held by the bank, mostly bad loans, more than doubled to 4.3 billion yuan. The bank’s core Tier-1 capital adequacy ratio fell to 9.92% from 11.01% a year earlier, against a minimum requirement of 7.5%, and its nonperforming loan ratio rose to 2.45% from 2.29%, far higher than the industry average of 1.86%.

The bank’s troubles emerged in late 2018 and were triggered in part by the mounting debt problems of privately owned Baota Petrochemical Group Co. Ltd., one of its shareholders. Baota relied on its financing arm to raise money through the issuance of short-term debt securities, and by the end of 2018 had racked up overdue payments of 17.5 billion yuan related to debt financing. A total of 79 commercial banks, including Bank of Gansu, held such debt instruments totaling almost 8.2 billion yuan. Bank of Gansu had also given Baota a line of credit amounting to 5 billion yuan, of which 4.3 billion yuan had been drawn down, according to a report from China Lianhe Credit Rating Co. Ltd.

This story has been corrected to reflect that Gansu Financial Capital is a wholly owned subsidiary of Gansu Highway Aviation Tourism.