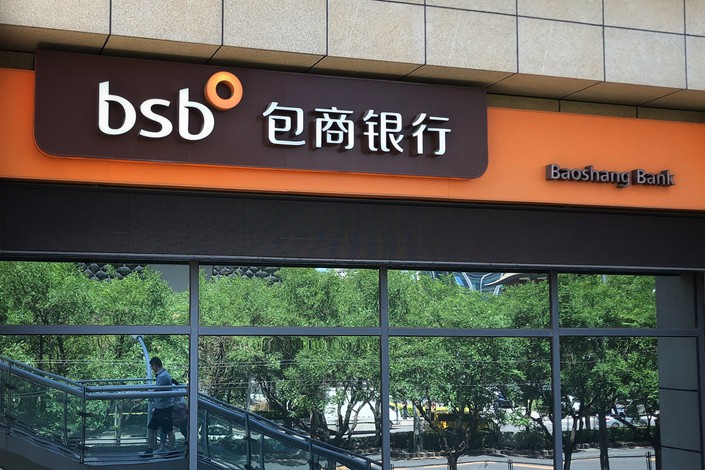 A Baoshang Bank branch in Beijing on May 27.

The rescue of troubled regional lender Baoshang Bank Co. Ltd., which was taken over by Chinese regulators in May because of what they described as its “severe credit risk,” is coming to an end.

Mengshang Bank Co. Ltd., a new commercial bank set up to take over Baoshang’s operations in its home territory of Inner Mongolia, officially came into being on Saturday at a ceremony attended by the lender’s new chairman and president, sources with knowledge of the event told Caixin.

Mengshang has been established with registered capital of 20 billion yuan ($2.8 billion) and capital reserves of 4 billion yuan, according to a March filing by Hong Kong-listed Huishang Bank Corp. Ltd., one of the new lender’s major shareholders. The People’s Bank of China (PBOC), the central bank, has the biggest stake in Mengshang with, 27.5%, which it holds through a wholly owned company Deposit Insurance Fund Management Co. Ltd., according to the filing. The latter company was set up in 2019 to manage a 100 billion-yuan fund to protect depositors’ savings at financial institutions.

The PBOC has also become a major shareholder in Hong Kong-listed Bank of Jinzhou Co. Ltd., which in March announced a restructuring that will see an entity owned by the central bank become its largest shareholder with a 37.7% stake.

Huishang Bank, which lost billions of yuan on its investments with Baoshang Bank, holds 15% of the new lender’s equity. The Hong Kong-listed bank announced in February it was taking over four of Baoshang Bank’s branches — in Beijing, Shenzhen, Chengdu and Ningbo — and buying other assets from the lender outside of Inner Mongolia. CCB Financial Asset Investment Co. Ltd., a unit of state-owned China Construction Bank Corp. (CCB), holds 5%. Government financial vehicles and state-owned enterprises (SOE) in Inner Mongolia hold a combined 52.5% stake in the new lender.

Huang Xiaolong, deputy head of the PBOC’s financial stability bureau, disclosed on Friday that the banking watchdog had approved the establishment of the new bank. The directors and senior management of Mengshang Bank have not been officially announced but sources have told Caixin that the chairman will be Yang Xianfeng, who previously served as the president of a CCB branch in northwest China, and the president will be Qiao Junfeng, a vice president at CCB’s regional headquarters in Inner Mongolia.

The PBOC and the China Banking and Insurance Regulatory Commission announced in May 2019 that they had seized Baoshang Bank, a move that sent tremors through the country’s vast interbank market and left some financial institutions nursing heavy losses. The takeover was part of the authorities’ efforts to contain financial risks stemming from the breakup of the business empire of disgraced tycoon Xiao Jianhua.

The takeover revealed endemic corruption at the lender, which has already led to the downfall of some of the bank’s executives and local banking regulators.

In just one example, Xiao Yu, hired by the bank’s former chairman Li Zhenxi as an assistant to the president, was found to have obtained 2 million yuan from the bank through expense claims. In 2016, Xiao received over 3 million yuan as annual salary, while in 2017 and 2018, he received more than 4 million yuan a year, Caixin has learned. From 2016 to 2018, Li’s annual salary reached over 7 million yuan on average, far higher than the 4 million yuan salary of Tian Huiyu, president of China Merchants Bank, one of the country’s biggest commercial lenders.