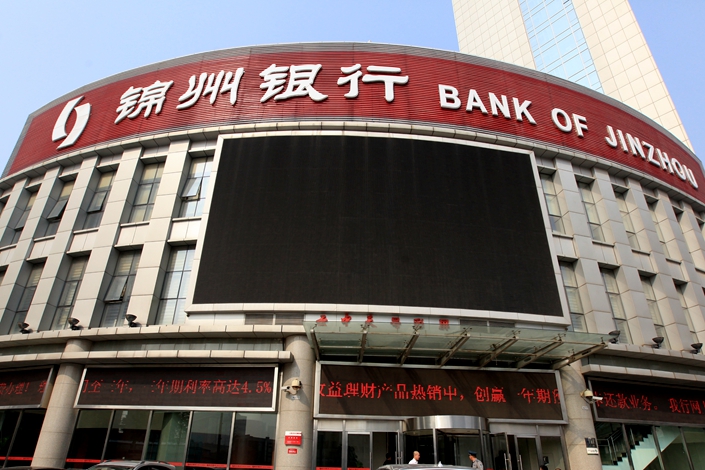 A Bank of Jinzhou branch in the northern Chinese city of Tianjin on Oct. 16. Photo: IC Photo

The state-backed bailout of troubled Bank of Jinzhou Co. Ltd. has taken another step forward with two government-owned entities, one controlled by the central bank, agreeing to inject nearly 12.1 billion yuan ($1.7 billion) into the Hong Kong-listed company through private placements that will make them the lender’s biggest shareholders.

Bank of Jinzhou is planning to sell new equity amounting to 44.3% of its enlarged share capital to Beijing Chengfang Huida Enterprise Management Co. Ltd., a special-purpose vehicle ultimately controlled by the People’s Bank of China (PBOC), and Liaoning Financial Holding Group Co. Ltd., a company set up by the finance department of the government of Liaoning province, where the bank is based. The proceeds of the placements, which were announced in a filing to the Hong Kong Stock Exchange on Tuesday, will be used to replenish the bank’s core Tier-1 capital, the highest-quality capital a bank has to absorb losses.

The cash infusion into Bank of Jinzhou, which reported a 4.5 billion yuan loss in 2018 and has yet to announce its 2019 results, comes eight months after the bailout of the regional lender began. In July three state-owned investment firms said they would inject capital into the company as part of a restructuring plan. ICBC Financial Asset Investment Co. Ltd., a unit of Industrial and Commercial Bank of China Ltd. (ICBC), the world’s biggest bank, said it would pay as much as 3 billion yuan for a 10.82% stake, making it at the time the largest shareholder. Its holding will fall to 6.02% after the latest private placements are completed.

The rescue of the once high-flying bank is one of several that Chinese authorities have orchestrated as they work to curb financial risks in the banking sector, especially among regional lenders. In May, the PBOC and the banking regulator took over Baoshang Bank Co. Ltd., an Inner Mongolia-based lender with links to fallen tycoon Xiao Jianhua. In August, Shandong province-based Hengfeng Bank Co. Ltd. received official approval for a restructuring plan that involves investment from the provincial government and a unit of China’s sovereign wealth fund.

The new shares being issued by Bank of Jinzhou are not part of the Hong Kong-listed company’s equity, but will be issued on the mainland as domestic shares. A total of 6.2 billion shares will be sold at 1.95 yuan per share, equivalent to HK$2.165, which is a 10.9% discount to the HK$2.43 closing price on Dec. 24 before the shares were suspended. The shares represent about 79.67% of the bank’s total existing issued share capital and approximately 44.34% of the total enlarged share capital after the completion of the private placements, according to Tuesday’s statement. The shares will account for 59.25% of the total domestic shares in issue.

Chengfang Huida, a subsidiary of China Cinda Asset Management Co. Ltd. but controlled by the PBOC, will subscribe for 5.27 billion new shares, which could cost it as much as 10.3 billion yuan. It will then become Bank of Jinzhou’s largest shareholder —with 37.69% of its enlarged share capital. Liaoning Financial Holding, which was set up in December with registered capital of 20 billion yuan, will hold 6.65% after buying 930 million shares.

The private placements form part of a restructuring plan announced by Bank of Jinzhou in its statement on Tuesday. It also intends to sell assets valued at 150 billion yuan to Chengfang Huida and subscribe to a 15-year 75 billion yuan debt instrument issued jointly by Liaoning Financial and the Deposit Insurance Fund Management Co. Ltd., a company set up by the PBOC last year to manage a 100 billion-yuan fund to protect depositors’ savings at financial institutions.

“Through the above plan for reorganization, the bank expects to improve its capital adequacy ratio, effectively improve its risk resistance ability, strengthen its corporate governance level and control its development direction, which provides the foundation for the bank to establish a healthy internal governance mechanism and realize the overall stable operation and so as to further improve its comprehensive competitiveness and promote its sustainable development,” the bank said in its announcement.

Chengfang Huida will fund the purchase of Bank of Jinzhou’s shares through a loan from its shareholders, according to the bank’s announcement. The company was set up by the PBOC in May with registered capital of 1 million yuan and net assets of approximately 500,000 yuan and is wholly owned by Huida Asset Management, which itself is 90% owned by Hong Kong-listed China Cinda Asset Management Co. Ltd. and 10% owned by Zhongrun Economic Development Co. Ltd., a unit of China Cinda. However, Huida Asset Management and Chengfang Huida are managed and controlled by the PBOC and are not regarded as a subsidiary of China Cinda, according to the statement.

China Cinda, one of China’s “Big Four” state-owned asset management companies (AMCs), is already a shareholder in Bank of Jinzhou through its subsidiary, Cinda Investment Co. Ltd., one of the three state-owned investment firms that took part in last July’s rescue. Reports at the time said it bought a 6.49% stake.

Concerns about Bank of Jinzhou’s financial situation emerged in early 2019 when its shares were suspended after it failed to publish its 2018 annual report and accounts by an end-of-April deadline set by the Hong Kong stock exchange. The lender’s auditors resigned at the end of May, citing inconsistencies in the bank’s financial statements that had made it impossible to complete the audit. The bank’s financial problems were laid bare in August after the lender finally produced its long-delayed annual report for 2018.

It reported a 4.5 billion yuan net loss for that year, swinging from a 9.1 billion yuan profit the previous year, as it took a 23.7 billion yuan charge related to a decrease in the value of its assets. The plunge in the value of its assets stemmed primarily from soured loans and write-downs that it was required to make following a change in accounting rules, according to the annual report. The bank’s nonperforming loan (NPL) ratio surged to 4.99% from 1.04% a year earlier and its total capital adequacy ratio (CAR), a measure of how well it can absorb losses, slumped to 9.12% from 11.67%.