Troubled Bank of Jinzhou Reveals All in Long-Delayed Report 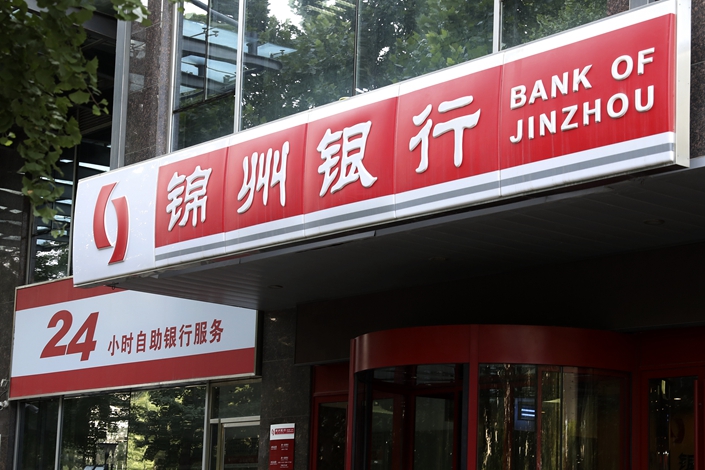 The financial problems of Bank of Jinzhou Co. Ltd. were laid bare last week as the lender, which was bailed out by three state-owned investors in July, finally produced its long-delayed annual report for 2018.

The embattled regional bank swung to a 4.54 billion yuan ($632.6 million) net loss in 2018 from a 9.1 billion yuan profit the previous year as it took a 23.7 billion yuan charge related to a decrease in the value of its assets, mostly comprising soured loans and write downs it was required to make following a change in accounting rules.

The bank’s non-performing loan (NPL) ratio surged to 4.99% from 1.04% a year earlier and its total capital adequacy ratio (CAR), a measure of how well it can absorb losses, slumped to 9.12% from 11.67%, according to a stock exchange filing on Friday.

The Hong Kong-listed lender also posted a net loss of 868.4 million yuan for the first six months of 2019 compared with a 4.34 billion yuan profit a year earlier, according to a separate filing on Sunday which also showed its NPL ratio had risen further to 6.88% and its total CAR had slumped to 7.47%, well below the regulatory minimum of 10.5%. CAR is calculated by comparing the amount of capital a bank holds with its risk-weighted assets.

Given the depth of its financial problems and the breach of regulatory CAR requirements, Bank of Jinzhou announced a proposal on Sunday to cancel dividend payments on its offshore preference shares from October 2018 to October 2019. The lender, which is based in the northeastern province of Liaoning, issued $15 billion of preference shares in 2017 with a coupon rate of 5.5% to bolster its core Tier-1 capital.

The deterioration in the bank’s performance in 2018 was a result of a surge in impairment losses partly stemming from tighter regulations on classifying and recognizing non-performing loans which started to be implemented last year.

The surge in bad loans has been partly blamed on excessive and risky loans the bank made to its large shareholders who are now facing financial difficulties of their own. The parent company of its previous largest shareholder, Beijing-based private carmaker Hawtai Motor Group Ltd, is heavily indebted and struggling to pay back billions of yuan raised through bond sales. At the end of July, it failed to repay investors who had opted for early redemption on a 1 billion yuan bond issue.

Concerns about Bank of Jinzhou’s future have mounted since its shares were suspended after it failed to publish its 2018 annual report and accounts by the end-April deadline set by the Hong Kong stock exchange. The lender’s auditors resigned at the end of May, citing inconsistencies in the bank’s financial statements that had made it impossible to complete the audit.

The bank was subject to a state-organized rescue in July when three state-owned investment firms, including one controlled by Industrial and Commercial Bank of China Ltd. (ICBC), the world’s largest lender, injected cash into the lender as part of a restructuring plan. ICBC Financial Asset Investment Co. Ltd. bought a 10.82% stake for around 3 billion yuan, becoming the largest shareholder.

Last month, as part of a management shake-up, Guo Wenfeng, a veteran ICBC banker with more than 25 years’ experience working in its branches in Liaoning, was appointed president of Bank of Jinzhou.

The bailout is the latest in a string of rescues orchestrated by the Chinese authorities as they work to curb financial risks in the banking sector, especially among regional lenders. In May, the central bank and banking regulator took over Baoshang Bank Co. Ltd., a regional lender based in Inner Mongolia with links to fallen tycoon Xiao Jianhua, and in August, Shandong province-based Hengfeng Bank Co. Ltd. received official approval for a restructuring plan that involves investments from the provincial government and a unit of China’s sovereign wealth fund.