By Liang Hong and Liu Jiefei 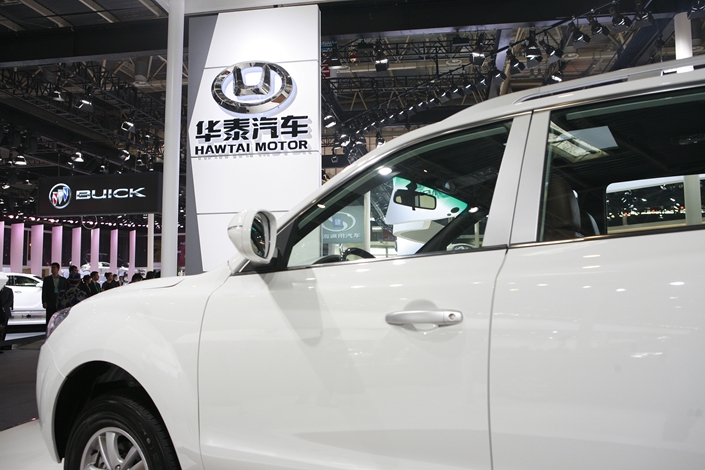 Hawtai Motor has failed to honor its obligation to repay 912 million yuan to bondholders who exercised an option to sell the securities back to the company. Photo: VCG

The financial crisis at cash-strapped privately owned carmaker Hawtai Motor Group Ltd. deepened this week as the company, which has a stake in troubled Bank of Jinzhou, failed to repay investors in a 1 billion yuan ($145 million) bond issue who had opted for early redemption and were due to be paid on Monday.

The Beijing-based group, which is chaired and controlled by businessman Zhang Xiugen, failed to honor its obligation to repay 912 million yuan to bondholders who exercised a put option to sell the securities back to the company, sources with knowledge of the matter told Caixin. The five-year bond, which matures in July 2021, is listed on the Shanghai Stock Exchange. Hawtai Motor hasn’t made any statement to the exchange about the default and declined to respond to Caixin’s request for comment on the issue.

However, in a private notice sent to bond investors on July 23, the company said it was facing serious liquidity risks due to the macroeconomic and financial environment and offered an alternative plan to pay at least 50% of its 912 million yuan repayment obligation in mid-October and the rest in July 2020 at a higher interest rate. The plan also involved the company pledging shares it holds in an energy company to the bondholders. However, some investors have not yet decided whether to agree to the proposal.

The bonds, along with two other bond issues traded on the exchange, have been suspended since July 23 after the carmaker requested a halt owing to what it described as uncertainty regarding “significant events” that could affect trading. It didn’t provide further details.

Hawtai Motor’s inability to raise funds to redeem almost the entire outstanding amount of the bonds indicates investors have lost confidence in the company and adds to concerns about its financial viability after news emerged on Friday that it could not repay the principal and interest on a 1.4 billion yuan privately placed bond. The debt security had been bought by just one investor who agreed to extend the maturity of the bond, sources with knowledge of the matter told Caixin.

But Hawtai Motor’s problems don’t end there. The company in total has more than 5.5 billion yuan of bond repayment obligations including the three bonds with a combined outstanding value of 4.15 billion yuan listed on the Shanghai Stock Exchange. Holders of 2 billion yuan worth of those bonds, set to mature in October 2021, will have the option to redeem them in October this year.

The company could also be in breach of regulations covering publicly offered bonds for failing to file statements about the default within two trading days of the event, a person close to the Shanghai exchange told Caixin.

A former soldier in the People’s Liberation Army, Zhang and his family set up Hawtai Motor in 2000. He was listed as No. 137 on Forbes Magazine’s China Rich List in 2018.

The financial calamity now engulfing the company, which stock exchange filings show was 99% owned by Zhang as of March 31, has been building since 2017. By the end of 2018, the company had 31.8 billion yuan of outstanding debts, up from 25.9 billion yuan at the end of 2015, company financial reports showed, and several of its manufacturing facilities have ceased operation, Caixin reported (link in Chinese) in April.

In 2018, Hawtai Motor reported annual sales of 102,300 vehicles, according to its filing to the auto industry association. However, vehicle registration and customs records show that it sold only 21,300 cars that year, including 2,950 in China, with the rest exported, checks by Caixin show.

Wu Hongyuran, Zhu Liangtao, Liu Yukun and An Limin contributed to this report.