By An Limin, Peng Yanfeng and Han Wei 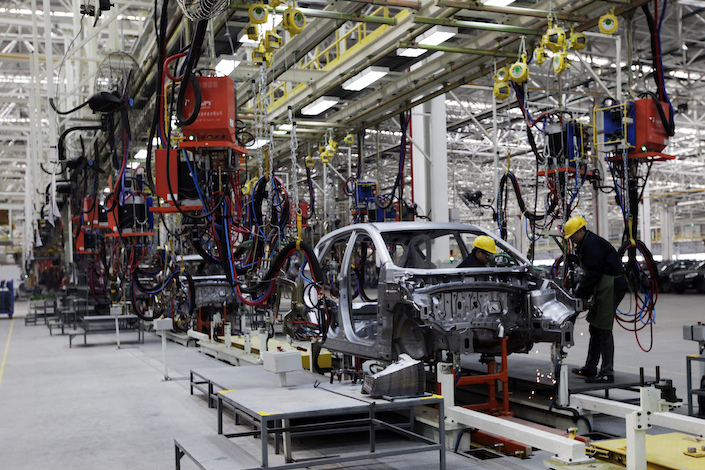 A financially strapped private carmaker is likely to default on 1.5 billion yuan ($218 million) of privately offered bonds as a deadline approaches by the end of Friday with no payment yet made.

Beijing-based Hawtai Motor failed to pay principal and interest on the three-year bonds into an account managed by fund manager Sealand Securities Co. on July 22, five days before the deadline as promised in the bond issuance document, according to Sealand.

Missing the payment to the deposit account means Hawtai technically defaulted on the bond, a bond market source said. Actual default will occur if the company fails to make the payment by the end of Friday. The company faces additional bond payment deadlines totaling 3 billion yuan by the end of October if investors decide to sell bonds back to it.

Established by businessman Zhang Xiugen in 2000, Hawtai owns four auto assembly plants with total capacity of 638,500 cars a year, as well as two auto parts manufacturing plants. A Caixin visit to Hawtai’s major facilities in March found that its production in Tianjin, Jiangsu and Inner Mongolian was mostly suspended. Hawtai’s access to additional funds is limited as most of its assets are already pledged.

Amid rising defaults on corporate bonds, a number of companies have made last-minute payments to bond investors, often citing issues such as money transfer errors. Chinese bond investors refer to delayed payments as technical defaults.

Sealand said it sent a letter to Hawtai urging payment and requiring additional guarantee for the bonds. Hawtai Motor and Sealand didn’t comment in response to an inquiry from Caixin’s on whether and when the payment may be made.

Funds raised by the bond sales were used to repay Hawtai’s debts and supplement operating capital, the company said in its bond issuance documents.

According to its 2018 financial report, Hawtai pledged 10.5 billion yuan of plants and land, plus 3.58 billion yuan of financial assets by the end of 2018. Hawtai also pledged most of its stakes in subsidiaries, including car assembly plants and auto parts factories, to banks for loans.

Hawtai pledged all its holdings in its Shanghai-listed arm SG Automotive Group to the Bank of Jinzhou for loans to fund its 2018 takeover of SG Automotive, sources told Caixin. Hawtai owns 4.68% of the Jinzhou bank, which is also under liquidity pressure. Bloomberg reported Thursday that the bank is in talks to introduce strategic investors to ease the crunch.

Hawtai is also seeking external support. Earlier this month, Hawtai said it forged a strategic partnership with property developer R&F Properties. R&F was to invest in Hawtai, the carmaker said, without giving details. But no progress has been announced. R&F declined to comment on the matter.

A company document dated May 20 showed that its wholly owned engine subsidiary, Inner Mongolia Ouyide Engine Co., was set to halt production the next day because of business difficulties. A manager at Hawtai’s Beijing headquarters said most employees have had their salary payments delayed for months.

In 2018, Hawtai reported annual sales of 102,300 vehicles to the auto industry association. However, vehicle registration and customs records showed that it sold only 21,300 cars that year, including 2,950 domestically.