By Zhao Ning and Lu Zhenhua 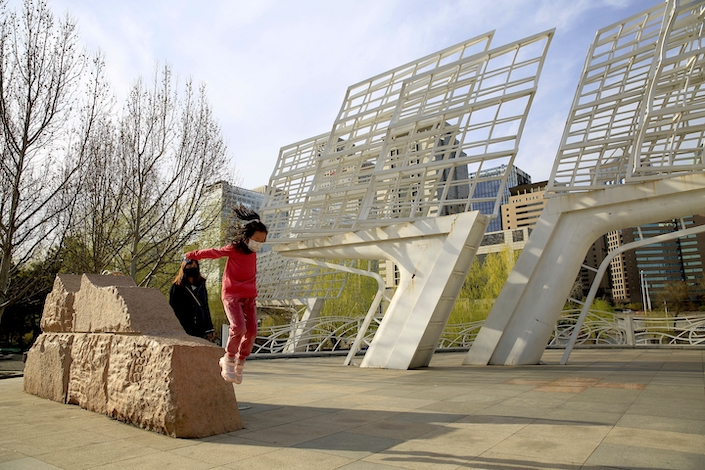 A girl plays in the Chaoyang Park in northeast Beijing. Photo: IC

Authorities designated the district Monday as China’s only high-risk zone for Covid-19.

Beijing will carry out mandatory nucleic acid testing on several broad categories of people and will extend self-quarantine periods from two weeks to three to guard against a resurgence of the deadly disease.

The cluster of infections emerged in the Chaoyang district earlier this month when a Chinese student who returned from the United States tested positive and infected three family members.

The student arrived in Beijing March 24 and tested negative after 14 days’ centralized isolation, Pang Xinghuo, a deputy director of Beijing municipal Center for Disease Prevention and Control, said Monday during a press conference.

But two days after returning home, the student began to develop symptoms of the new coronavirus infection and tested positive April 14, Pang said. The person infected three family members. At least 62 close contacts have been identified and isolated. The case underscored that the virus’s incubation time can be longer than two weeks.

Any place where a cluster of infections emerges over 14 days and has had more than 50 cases is considered a “high-risk” location under state regulations, according to Pang.

Gao said the nucleic acid tests will be required for Covid-19 patients and those who have had close contact with such patients, fever clinic patients, patients in urgent need of hospitalization, inbound visitors through Beijing's entry customs, people who recently returned from Wuhan, government employees who traveled outside Beijing, visitors in Beijing's hotels and guesthouses, and students in graduating classes in junior and senior high schools upon returning to Beijing, according to the official Xinhua News Agency.

Liu Xiaofeng, also a deputy director of the Beijing CDC, during a Saturday press conference encouraged that people who concluded a 14-day centralized isolation should continue to stay at home in self-quarantine for an additional seven days.