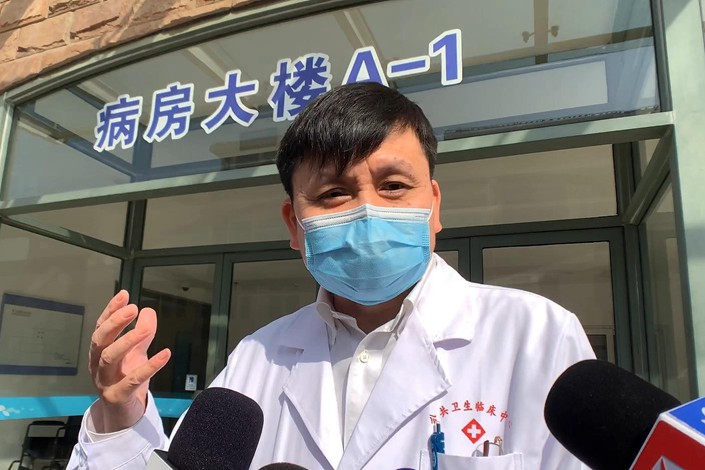 One of China’s most prominent medical experts has said countries will have to accept long-term disease control measures as a part of life even after their coronavirus outbreaks peak.

Zhang Wenhong, the head of Shanghai’s Covid-19 clinical expert team and a director of the infectious disease department at one of the city’s top hospitals, said Wednesday that the world will move into a phase of “normalized epidemic prevention and control” as caseloads fall and more nations eye returns to economic productivity.

His comments, made during an online event organized by the Chinese Embassy in India, come as parts of the United States as well as some European nations mull an easing of restrictions imposed to curb the spread of Covid-19, which has so far infected 2.6 million people and killed more than 180,000 worldwide, according to a tally maintained by Johns Hopkins University.

China, where the virus was first detected late last year, has been encouraging its citizens to get back to work for several weeks. The number of new cases in the country has fallen to a few dozen per day.

“Few countries can endure society coming to a standstill,” Zhang said. “So, after weighing things up, almost all countries will make a similar choice to slowly relax disease controls as numbers of new cases fall and the public accepts current epidemic prevention policies.”

Although countries will decide for themselves how deeply to incorporate disease control into daily life based on their own circumstances and resources, the key will be to “restrict outbreaks to controllable levels,” Zhang said.

Declining to give his opinion on the U.S.’s overall Covid-19 strategy, Zhang said that decisions by state governments had resulted in the country’s checkered response. While some American states have taken strict social distancing measures, others have allowed people to carry on working with minimal restrictions.

India’s outbreak bears similar hallmarks to the U.S., Zhang said. Compared with Shanghai, which undertook aggressive quarantine, testing, and contact tracing measures early on, “India hasn’t locked down cities for great lengths of time, doesn’t necessarily have the same enforcement capacity as China, and has not made diagnoses in a timely manner.”

Long-term disease control should proceed from a “scientific” basis, Zhang said. He criticized as “unreasonable” and overcautious the recent measures taken by some Chinese provinces requiring overseas arrivals to undergo 14 days of medical observation followed by 14 further days of home quarantine.

China had recorded very few instances of people continuing to be infectious after two weeks of isolation, and it was very unlikely that the nucleic acid tests performed on such individuals would miss many positive cases, Zhang said. The risk of contagion is highest during the first two weeks of infection and falls significantly by the third week, he added.

Frequently interviewed by the Chinese media, Zhang said earlier this month that the country may see a resurgence in Covid-19 infections from November, but any new flare-ups will be manageable.