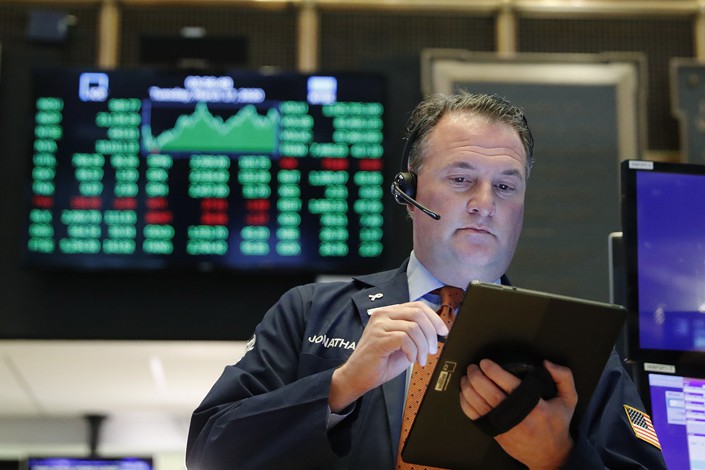 A trader works on the floor of the New York Stock Exchange shortly before the closing bell on March 17.

Though I have spent nearly 40 years studying financial markets, I find them as bewildering, complex, and fascinating as ever. At the time of this writing, the most widely watched equity index, the S&P 500, is trading at around 2,878, where it closed on April 27 (a Monday). That was its highest close in six weeks, putting it less than 15% below its all-time high, reached just before the Covid-19 pandemic, and some 30% above its low in March.

This outcome seems to fly in the face of growing evidence suggesting that the U.S. economy is headed for a contraction on a scale unseen since the Great Depression. Why is the U.S. stock market (and many other markets) behaving this way? Are today’s market participants collectively smarter than the financial commentariat, as so often turns out to be the case?

Back in January, the Covid-19 outbreak was widely expected to produce a V-shaped recession (a sharp drop, followed by an equally sharp rebound) for most economies, because that is what happened in the case of SARS and other epidemics since the turn of the century. Four months later, it is certainly reasonable to ask if markets have been lulled into a state of irrational hope, finding comfort in the assumption that policymakers will continue to do “whatever it takes.”

While I am no longer consumed by day-in, day-out market-watching, I do occasionally check in on chart patterns, moving averages, and various technical analyses, such as those following the so-called Elliott Wave theory. Not surprisingly, the latest forecasts are all divided. Many share the gloom of most market analysts, and expect that the S&P 500 will drop to as low as 1,600, which would be consistent with a multi-month economic collapse.

Others, however, believe that we might be looking at a rally beyond 4,000 by early next year. That bullish projection anticipates not just a V-shaped recession but an upswing that is even more vigorous than the decline. Surely, such a strong market move would be impossible in the absence of a widely available Covid-19 vaccine, right?

Frankly, I have no idea how to answer such questions, and neither does anyone else (though some might pretend otherwise). Markets tend to move around to a staggering degree, propelled by extremes of maximum greed and maximum fear. The drop-off in mid-March may have reflected something close to maximum fear. If so, it is possible that the current market has already discounted for the increasingly popular gloom narrative suggesting that there can be no V-shaped recession, only a deep-bottomed “U,” a stop-start “W,” or even a prolonged “L.”

After all, the most recent stock-market recovery has been led in large part by the tech sector. Before the pandemic, many assumed that these companies were heading for a reckoning in the form of tighter regulation, antitrust actions, and so forth. But now, digital technologies and the companies that offer them have become more deeply embedded than ever, which suggests that there will be less political will for a post-pandemic crackdown on the industry.

Moreover, the countries that appear to be managing Covid-19 better than most have done so with the help of technology, and the rest of the world is now rushing to replicate their success. The key is to deploy widespread testing, tracking, and contact tracing, all of which requires significant technological adaptation. The United Kingdom’s National Health Service will almost certainly emerge from the crisis as a vastly more technology-reliant organization than it was going into it.

By the same token, one should question the now-popular assumption that we are on the cusp of “deglobalization.” If that is the case, why is every country looking beyond its borders for access to the most useful new technologies and methods of containing the pandemic? Or consider the quest to develop a Covid-19 vaccine. We are witnessing one of the most remarkable episodes of international collaboration that the pharmaceutical sector has ever sustained.

To be sure, after the pandemic, many companies might be wary of depending wholly on any one country as the source of key inputs. But that doesn’t mean we are heading into a new era of autarky. If anything, companies will be looking even farther afield for ways to broaden, diversify, and reinforce their supply chains.

As long as firms seek to satisfy consumers with the highest-quality products at the lowest possible prices, globalization will remain a fact of 21st-century economic life. Likewise, as long as people have an interest in seeing the world beyond their immediate community, international travel and tourism will continue to track per capita income growth.

Sure, the United States and the rest of the world may bungle the transition out of the lockdown phase, setting the stage for an extended period of political turmoil and social misery. The S&P 500 may well plummet to 1,600. Then again, it may well do nothing of the kind.