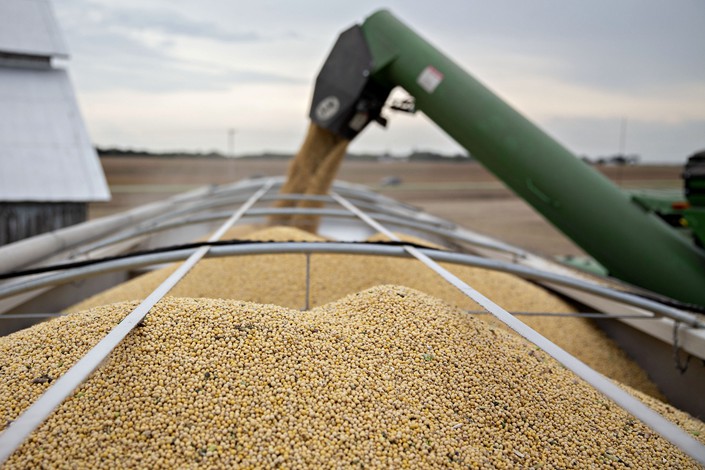 Soybeans are loaded into a grain cart during harvest in Wyanet, Illinois, Sept. 18, 2019.

China is boosting its purchases of U.S. soybeans to fulfill commitments under a trade deal signed by the world’s two largest economies in January.

Between April 22 and May 5, American private exporters reported sales of 1.25 million tons of soybeans to China, according to data from the U.S. Department of Agriculture (USDA). By comparison, China imported a total of 1.75 million tons of U.S. soybeans in the whole month of April 2019, according to China’s General Administration of Customs.

In the first three months this year, China’s soybean imports from the U.S. more than doubled from the same period last year to 7.8 million tons, customs data showed (link in Chinese).

The impact of the coronavirus outbreak on U.S. soybean cultivation is limited, as the sector is highly mechanized, Zhang Zhen, an industry researcher with the Research Center for Rural Economy, which sits under China’s Ministry of Agriculture and Rural Affairs, told Caixin.

The humble soybean is one of the biggest agricultural bargaining chips in China-U.S. trade talks. As part of the phase-one trade deal signed in January, China promised to buy at least $40 billion of food, agricultural and seafood products on average annually over the next two years, including soybeans, from the U.S., the world’s biggest grower of soybeans.

China is home to about 20% of the world population but only has 7% of the world’s arable land, leaving it dependent on imports for many agricultural products. It is also the world’s biggest consumer of soybeans, using some 110 million tons every year, 90% of which is imported.

Read more
In Depth: Why China Is Still Hooked on U.S. Soybeans

In July 2018, Beijing slapped a 25% tariff on U.S. soybeans as the trade war began, and some Chinese buyers have reduced or even suspended purchases, leading to a collapse in American sales and a decline in China’s overall soybean imports. The situation has improved since the two countries sealed the phase one trade deal.

U.S. President Donald Trump said Wednesday that he will give an update on China’s progress in fulfilling promises made in the trade deal in about a week or two.