China Greases Tesla’s Wheels, Even as California Keeps on the Brakes

By Yang Ge and Zheng Lichun 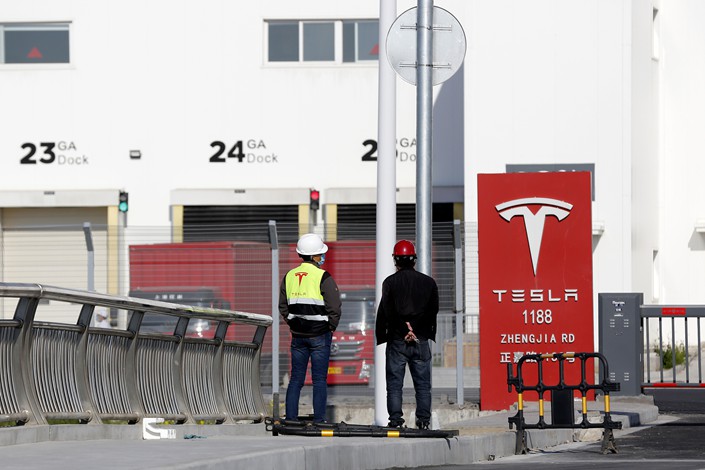 Electric vehicle highflyer Tesla Inc. said it has received a major new loan from China’s largest lender to expand capacity at its Shanghai manufacturing base, contrasting sharply with a higher-profile dust-up in the U.S. that saw it threaten to move production away from its home state of California.

The pair of developments highlight the lengths to which China is going to accommodate makers of commercially competitive new energy vehicles (NEV), as part of its broader aims to clean up the country’s air and foster development of exportable technologies. By comparison, the U.S. is currently focused on fighting the Covid-19 outbreak, with much of the country still under various stages of lockdown as it tries to bring the virus under control.

China has become the world’s largest NEV market, thanks in large part to strong government support that underpinned Tesla’s decision to build a plant in Shanghai last year — its second such facility complementing its original base in Fremont, California. That complex is expected to ultimately soak up billions of dollars in investment, with much of the financing coming from China’s big state-owned banks, which often lend in sync with government policies and priorities.

In the latest move on that front, the company disclosed on May 7 that it had signed a working capital loan agreement with the Industrial and Commercial Bank of China (ICBC) branch in Shanghai’s Free Trade Zone with a limit of up to 4 billion yuan ($564 million). It added the money would be used primarily to augment production at the Shanghai facility.

Tesla has previously announced similar local financing for the project, including 3.5 billion yuan in loans from Chinese banks in March of last year, shortly after construction began.

The company has had a more difficult time recently with its older main manufacturing plant in Fremont. That plant has been closed since March 23 with no signs of when it might be allowed to reopen. By comparison, Tesla announced in late January that the Shanghai plant had been closed as the Covid-19 outbreak first exploded in China, but then quickly reopened it less than two weeks later with approval from local officials.

Tesla was hoping it would get similar approval to restart operations in California last week, but was refused such permission last Friday. That same day, the company filed a complaint with the U.S. District Court in San Francisco, saying the order by Alameda County, where the factory is located, violated due process and “puts businesses deemed critical to the nation’s well-being by the federal and state governments between a rock and a hard place.”

Outspoken Tesla founder Elon Musk, who has called coronavirus-related shutdown orders fascist, said Tesla will decide whether or not to keep producing cars in Fremont based on how it’s treated going forward. The San Francisco Bay area where the company is based was the first region in the country to implement stay-home orders to contain the spread of Covid-19 and has been cautious about lifting them.

After years of losses, Tesla recently turned profitable and posted three consecutive quarters in the black, including this year’s first quarter. But the company risks a return to the red in the current quarter if it cannot soon restart production at the Fremont factory.

Musk at first defied Alameda’s mid-March shutdown order and resisted pressure from the county and Fremont to idle the factory. While Tesla claimed it was an essential business, the county’s health officer disagreed and said the plant posed a public health risk. Much of the San Francisco Bay area has since extended shelter-in-place orders through the end of May.