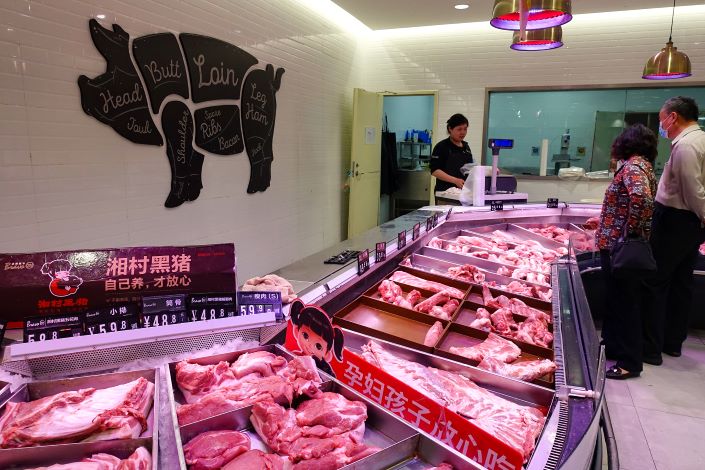 China’s factory gate prices fell at their steepest pace in four years in April, official data showed on Tuesday, as industrial demand continued to weaken amid the worldwide coronavirus pandemic.

The producer price index (PPI), which tracks changes in the prices of goods circulated among manufacturers and mining companies, fell 3.1% year-on-year (link in Chinese) in April, data from the National Bureau of Statistics (NBS) showed. The rate of decline accelerated for the third month in a row.

The April reading was steeper than the median estimate of a 2.7% drop (link in Chinese) from a Caixin survey of economists.

“This is consistent with broader evidence that demand remains very weak and is recovering more slowly than output,” said Julian Evans-Pritchard, senior China economist at Capital Economics Ltd., referring to the deepening PPI deflation. “The decline was driven by lower prices of raw materials and manufactured goods.”

The PPI fell 1.3% in April month-on-month, marking the quickest monthly rate of deflation since January 2009, in the depths of the global financial crisis, according to NBS data compiled by data provider CEIC.

China’s manufacturers have started to recover as its Covid-19 epidemic has been brought under control. However, the rapid spread of the disease across other countries and regions has disrupted businesses around the globe.

According to the Caixin China General Manufacturing Purchasing Managers’ Index released last month, new export orders placed with Chinese manufacturers in April contracted for a fourth straight month and at a faster pace, with the reading at its weakest since December 2008.

The NBS said in a statement (link in Chinese) that the key culprit behind the PPI decline was a slump in the prices of crude oil, natural gas and other materials. Economists with Nomura International Ltd. said in a research note that they expect PPI deflation to moderate to 2.7% year-on-year in May due to rising prices of those materials.

Meanwhile, the consumer price index (CPI), which measures the prices of a select basket of consumer goods and services, rose 3.3% year-on-year (link in Chinese) last month, the NBS said, as businesses resumed production. The April reading was the lowest in seven months and marked the third straight month of deceleration. It was lower than the median estimate of 3.6% growth by economists surveyed by Caixin.

Pork remained the major driver of CPI growth, with prices surging by 96.9% as China continues grappling with lingering fallout from a prolonged and devastating outbreak of African swine fever. However, that reading was down from 116.4% growth in March.

Economists with Nomura projected CPI inflation would further drop to around 3% year-on-year in May given the increasingly high comparison base for pork prices, although some factors such as the restoration of all highway tolls across China from May 6, gradual recovery of catering businesses and export bans introduced by some countries may add inflationary pressure.

The core CPI — which excludes more-volatile food and energy prices and may better reflect long-term inflation trends — rose 1.1% year-on-year in April, down slightly from 1.2% growth the month before, the NBS data showed.

“Falling CPI inflation will provide Beijing more policy space to roll out stimulus measures to offset the impact of COVID-19 on the economy,” Nomura’s economists said.

On Sunday, China’s central bank signaled it will step up support for the world’s second-largest economy as it struggles to recover from the impact of the coronavirus epidemic, pledging to strengthen policies that will help companies, boost jobs and increase domestic demand.

China’s main economic policies and targets for this year, including the GDP growth and budget deficit goals, will be announced at the annual meeting of the National People’s Congress, the country’s legislature, which begins May 22. Many economists expect further measures to boost the economy will be announced.