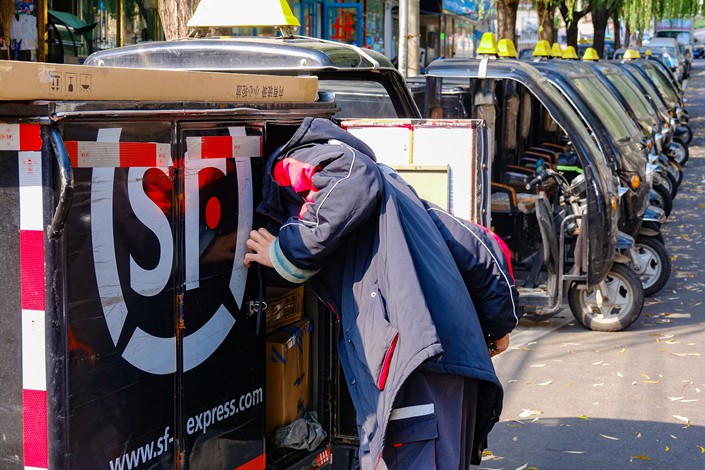 SF Holding has rolled out a series of measures to attract more merchants to the service, including zero franchise fees and low commission rates.

SF Holding Co. Ltd., parent of courier giant SF Express, is testing a new food-delivery service targeting business clients buying in bulk. If it moves ahead with the plan, it would become the latest challenger in a crowded market dominated by two tech giants – Meituan Dianping and Alibaba.

The service, dubbed Fengshi or “abundant food” in English, is currently only available to SF Holding’s own employees. It will be opened to the general public after the company has developed a mature plan, a company spokesperson told Caixin on Monday.

SF Holding has rolled out a series of measures to attract more merchants to the service, including zero franchise fees and low commission rates.

The company has not launched its own app for the Fengshi food service, opting instead for a mini program inside the ubiquitous WeChat app. It used this mini program to announce that it has partnered with dozens of restaurant brands, including Pizza Hut, popular Inner Mongolian food chain Xibei and fast-food chain Real Kungfu.

SF’s move into food delivery comes as China’s catering industry and the nation’s diners are emerging from the months-long coronavirus pandemic, which made takeout hugely important as dine-in eating was tightly restricted or outright banned across much of the country.

It also comes as one of the takeout sector’s biggest players, Meituan Dianping, recently faced a nationwide backlash from businesses which accused the internet services giant of squeezing their already dwindling profits by charging excessive commission fees.

However, it’s too early to say if the end of the lockdown and Meituan’s woes will offer a winning opportunity for SF. An employee at one of SF’s restaurant partners told Caixin that few orders have come in via Fengshi and the company has not yet plowed resources into developing the platform.

Meituan, which is backed by social media behemoth Tencent Holdings Ltd., has been locked in a costly years-long subsidy war with Ele.me, which is owned by deep-pocketed e-commerce giant Alibaba Group Holding Ltd.

Previous forays into food delivery by SF’s peers have yielded little success. Shanghai-based courier Dada launched its own takeout service in 2015, but was quickly met with a boycott by several takeout giants. Dada dropped the venture and later merged with JD Daojia, a grocery delivery company.