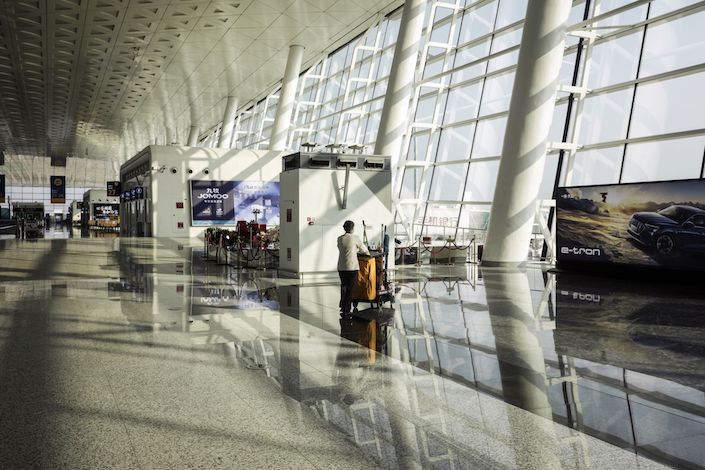 A cleaner pushes a cart through the nearly empty departure hall at the Wuhan Tianhe International Airport in Wuhan. Photo: Bloomberg

(Bloomberg) — China is allowing executives from some foreign companies to enter the country despite a coronavirus travel ban as it seeks to restart the economy, according to people familiar with the matter.

The Ministry of Commerce told some key foreign companies they can apply for exemptions to the entry ban if they want to get executives back into China, the people said, asking not to be identified because the matter hasn’t been made public. They would still serve a mandatory quarantine, one of the people said.

The move is the latest sign that China, which has banned almost all foreigners from entering since late March, is taking steps to reopen its borders for business. China has had some success in containing the outbreak, which first emerged in the central city of Wuhan, and businesses such as Shanghai Disneyland reopened Monday with health checks and social-distancing measures.

“China will establish fast-track channels for business, logistics, production and technical services professionals from some countries to travel to China under the premise that safe epidemic prevention is ensured,” the Ministry of Foreign Affairs said in a statement in response to a Bloomberg News query.

After first-quarter gross domestic product had its worst slump since the 1970s, officials are focusing on normalizing the economy. Rising unemployment and a collapse in global demand mean the risk of a second quarter of contraction persists.

China and South Korea agreed to simplify entry for essential business travelers from the start of May. The “fast-track” arrangement allows South Korean businesspeople to travel to 10 Chinese provinces and cities after their visas are approved. Health screenings and quarantine procedures remain in place, though the length of quarantine in China is up to two days, compared with the standard 14 days. Chinese travelers to South Korea need to apply for quarantine exemptions and pass health tests.

The goal of the agreement is to expedite entry for people urgently needed for the resumption of essential work and production, while keeping supply chains between the two countries stable and unimpeded, China Foreign Ministry Spokesman Geng Shuang said April 30 at a news briefing. China would like to establish fast-track agreements with other countries, he said, without elaborating.

Some German companies are awaiting feedback after applying for exemptions, one of the people said. One person who got in was Volkswagen AG’s executive vice president for research and development, Thomas Muller, who entered China from Germany recently, according to Volkswagen.

There are still some uncertainties about the fast-track process and logistical complications. Foreign travelers would need to show they aren’t infected before making their trips, which would include getting tested at approved centers, some of the people said. There are restrictions within China too, with some provinces and cities requiring quarantine for people who have traveled from places designated as more at risk to the virus.

There are potholes along the path to recovery though. The city of Shulan in northeast China’s Jilin province is under lockdown after an increase in coronavirus cases over the weekend, while new infections have emerged in Wuhan for the first time in more than a month. In total, China has reported 82,919 confirmed cases and 4,633 deaths from the virus.