By Ma Danmeng and Timmy Shen 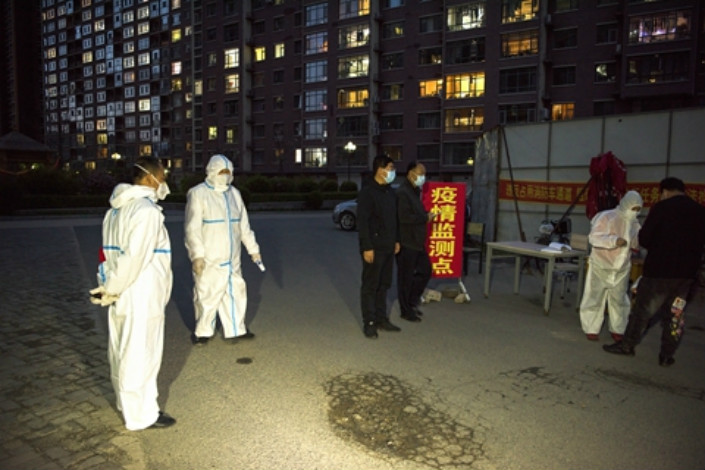 Residents and visitors have their temperatures taken at the entrance of a residential compound in Shulan, Jilin on May 12.

The city of Jilin in Northeast China’s Jilin province has removed a total of six officials as the coronavirus continues to sweep the region around Shulan, a county-level city governed by Jilin city.

The Jilin provincial party committee announced on Saturday morning in a social media post (link in Chinese) that Li Pengfei, party chief of Shulan, had been removed from his post and Zhang Jinghui, Jilin city’s deputy governor, is taking over Li’s duty.

Another five officials were also removed, including Jilin city’s deputy head of the health commission, the director of Fengman district’s disease control center, the head of Shulan’s health bureau, the deputy party chief of Shulan’s public security bureau and the director of the city’s disease control center, according to another social media post (link in Chinese) published Saturday.

The moves come as Shulan and its neighboring areas struggle to contain the coronavirus after a cluster of local cases appeared.

Since the first case in this latest wave was reported in Shulan on May 7, Jilin city has confirmed a total of 32 local cases as of the end of Saturday, including 18 cases in Shulan, 12 in Fengman district and two in Chuanying district, the city said (link in Chinese).

Shulan has rolled out a series of restrictions, effectively putting residents back into lockdown. Shulan has been classified as a high-risk area, while Jilin province on Saturday adjusted (link in Chinese) Fengman’s status from medium-risk to high-risk.

The source of the outbreak in Jilin remains uncertain, but many have linked the cases to a 45-year-old woman who was a laundry worker at Shulan’s public security bureau and was confirmed to have the virus in early May. The laundry worker’s infection was the first time Shulan reported a case of Covid-19 in more than two months.