Living in a New Reality: How China Is Reopening After Pandemic Lockdown 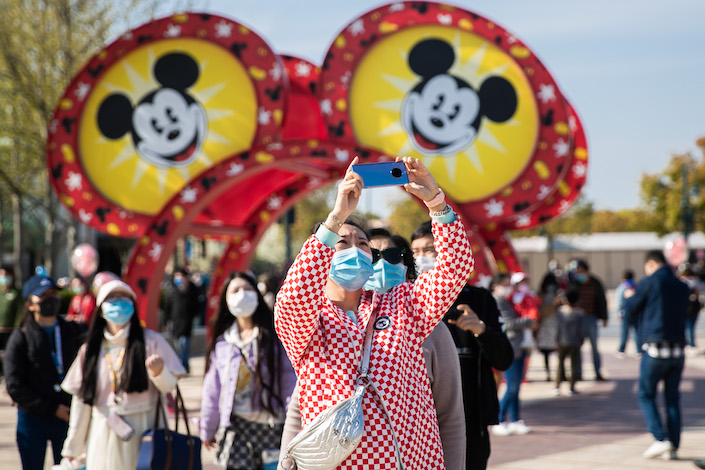 Shanghai Disneyland has reopened after shutting down for months amid the pandemic. Visitors can now enter the theme park with pre-booked tickets and QR codes verifying their health status.

Shops and restaurants in Chinese cities are filling again as the country lifts drastic lockdown measures to contain the coronavirus that lasted nearly three months.

Step by step, factories, offices and schools across China have also been reopening since March as domestic cases of Covid-19 fell sharply. But the China that people are returning to as they try to resume normal life isn’t quite normal.

In Beijing’s reopened workplaces and public spaces, wearing of face masks and screening for body temperature have become routine for ordinary people. Shopkeepers and operators of public libraries, cinemas and museums carefully monitor visitor inflows while stepping up hygiene measures.

Shanghai Disneyland this week welcomed thousands of visitors for the first time in three months. Instead of parades and fireworks, mandatory masks and social distancing became the new look of the park.

There is still unease in China that the virus may come roaring back as sporadic outbreaks continue. Community workers and officials in Wuhan, China’s pandemic epicenter, are preparing to test all of the city’s 11 million residents in hopes of uncovering any signs of possible resurgence. Meanwhile, the northeast city of Jilin swiftly reimposed a partial lockdown after a cluster of new infections emerged.

What’s happening in China offers a close look at the unprecedented, delicate balancing act facing policymakers as they try to restart shuttered economies amid the pandemic. Although countries around the world are at different stages in the Covid-19 catastrophe, all governments face similar, immense pressures to bring commercial and social activities back on track while keeping people safe.

“No country, especially those with economies as colossal as China and the United States, could expect to completely reopen overnight,” wrote the Brookings Institution’s Li Cheng and CreditWise Technologies’ Chen Jian in an analysis of China’s economic reopening. “The regional variations and sectoral priorities employed — either intentionally or spontaneously — in the economic reopening of China deserve particular attention.

Despite the many unsolved mysteries surrounding the new virus, global experts largely agree that the bug that has sickened more than 4.4 million people worldwide may not easily go away. The World Health Organization recently suggested that the virus may stay and could become endemic in some communities, similar to the virus that causes HIV/AIDS. It means people will have to learn to live under the shadow of the deadly disease and governments must lay out measures balancing economic costs and public health benefits.

“Facing significant, growing pressure to combat negative growth rate, the rapid rise of unemployment and the potential disastrous resulting domino effects, both China and the United States have been striving to reopen their economies,” Li and Chen wrote. “By late April, as a result of the continuing growth in infections and deaths in the United States, the U.S. economy had been shut down for a longer period than China’s economy. But a series of premature reopenings in the United States could potentially have catastrophic health and economic outcomes.”

As the first country to confront the coronavirus, China may offer practical clues for other countries in navigating the new normal to restore social activity under the pandemic.

In a May 8 policy document guiding economic reopening, China’s State Council pledged to aggressively ramp up virus testing to cover all people exposed to greater infection risks and allow everyone who wants a diagnostic test to get one.

Countries that have successfully controlled the virus including South Korea and China showed how large-scale and efficient testing is a key to containing the coronavirus. Massive testing, rapid contact tracing and strict quarantine are the only measures for slowing the contagion in the absence of proven treatments and vaccines, experts said.

The widespread existence of asymptomatic makes testing even more important. In late March, China’s national health authorities reported that the country had recorded 1,541 patients who tested positive for Covid-19 but showed no symptoms. By May 13, the number of asymptomatic patients under observation in China declined to 712.

Since the outbreak, China has accelerated approval of testing kits, widened market access to private companies and expanded testing capability. The country now has manufacturing capacity to produce enough testing kits for domestic use. But it still faces constraints in testing enough people because of uneven access to testing facilities among regions and lack of qualified labs to run the tests.

The cabinet set out a plan in April to expand publicly funded virus testing facilities nationwide by establishing new labs and upgrading existing ones. Major hospitals are required to set up qualified labs to facilitate virus testing.

Several major cities have promised to provide affordable nucleic acid tests to people in need. Several private testing companies have partnered with e-commerce platforms run by Alibaba, JD.com and Pinduoduo to offer reservations for testing in big cities, with testing costing less than 200 yuan ($28) per person.

In the May 8 document the cabinet said local governments should cover testing costs for susceptible groups and people in mandatory need of testing, including suspected patients and their close contacts, medical workers, nursing home employees and customs officers. Employers should also shoulder part of the costs for employees.

Screening of inbound travelers will be crucial as international travel gradually resumes. The General Administration of Customs expanded purchases of testing devices and protection gear in preparation for rising cross-border movement, according to Song Yueqian, a senior customs official. The administration also added 400 testing workers and nine biosafety level-2 laboratories.

China now requires all inbound travelers to stay at designated quarantine sites for at least 14 days upon arrival. Some cities prone to higher infection risk are adding an extra period of home isolation for travelers. In Guangzhou, southern China’s international trading hub, massive nucleic testing was carried out among nearly 5,000 people with overseas travel histories. The city also set up more sites to provide free tests for local residents.

The next tough test for China and other countries that have brought domestic infections under control will come in next three to six months, said Zhang Wenhong, head of the infectious diseases department of Huashan Hospital of Fudan University in Shanghai. As most countries press to resume business and travel, governments will face mounting pressure to control the inflow of cases, Zhang said.

Since the early days of the outbreak, Chinese cities have implemented restrictions at different times and scales based on local conditions. Provinces are rated with different risk levels and are subject to varied disease control measures.

By March 2, all of the Chinese mainland’s provincial-level regions lowered their emergency responses from the highest level after epicenter Hubei adjusted its risk rating, a milestone in the months-long war against the virus. But authorities remained on high alert for regional flare-ups and are swiftly calibrating controls.

In late April, Beijing heightened disease control measures in the Chaoyang district after new cases emerged. Earlier this week, Shulan, a county-level city in northeast China’s Jilin province, rolled out a series of new restrictions, effectively putting residents back into lockdown, after a cluster of a dozen cases appeared.

As the disease lingers, prevention measures may move back and forth, requiring more capable local disease control systems to respond quickly, experts said. Local governments have recently delivered restructuring plans for public health systems to support the potential ongoing battle over the next 1–2 years. The plans highlight the need to build up more-efficient disease monitoring, alert and response mechanisms.

As disease control becomes normalized, policymakers need to work out measures and adjust policies based on scientific research and analysis, Zhang said.

In their analysis of China’s reopening, Li and Chen found a correlation between the severity of regional infection rates and return-to-work speed. For example, Hubei and Beijing, which had the highest infection rates, had the lowest return-to-work rate in March. They also showed that by late April, the flow of people back to factories reached 81.3% and to offices, 74.7%, while the recovery rate for shopping malls was just 65.8%.

Living with the ‘new normal’

People in China are gradually adapting to the new realities of life under the pandemic. People wear face masks in public and sit at a distance from each other in restaurants.

At school gates, returning pupils take temperature tests before entering as classes resume in phases. Cinemas in regions with low risks are being allowed to reopen by appointment and with reduced capacity.

In Beijing’s recently reopened National Library, visitors need to make appointment in advance and present a "green" code on a mobile app that calculates their risk level before they are allowed to enter. Some schools in Beijing also turned to new technology by asking students to wear smart devices to monitor their body temperatures and infection risks.

China has won its first battle against the outbreak backed by the efforts of the public and medical professionals. The next phase will be a test of the nation’s resilience and wisdom, Zhang said.