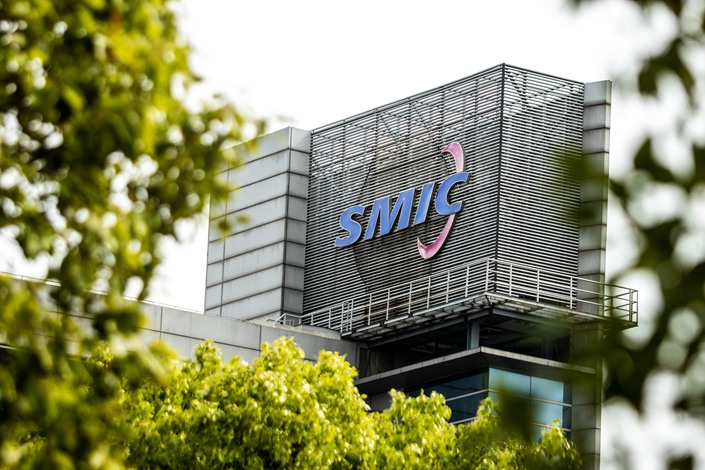 SMIC headquarters in Shanghai, May 14.

SMIC announced on Friday that it had secured funding from two state-owned funds, China IC Fund II and Shanghai IC Fund II, which will contribute $1.5 billion and $750 million respectively, the Hong Kong-listed company said in a statement filed to the bourse.

This is SMIC’s second fundraising announcement, after the firm revealed it was planning to raise over 20 billion yuan ($2.8 billion) through a listing on Shanghai’s Nasdaq-like STAR Market. It will use 40% of the capital it plans to raise through the listing, or nearly 8 billion yuan, to increase production capacity, the company said.

Also on Friday, the U.S. government announced it was further tightening export controls targeting China’s leading telecom and smartphone vendor Huawei Technologies Co. Ltd. According to the new rules, any company using U.S. technology and software will require approval from the U.S. Department of Commerce to sell chips to Huawei.

As the Chinese mainland’s leading foundry, SMIC stands to benefit if Chinese chip-buyers are forced to turn to domestic companies, analysts said. Already, companies including Huawei’s chip-design unit HiSilicon have begun to order chips containing transistors smaller than 40 nanometers from SMIC, Industrial Securities said in a note earlier this month.

However, the new U.S. rule will also affect SMIC, as it relies on U.S.-made equipment to produce chips and it is not clear if the Chinese company would be able to gain a license to continue selling to Huawei.

Also, SMIC lags far behind TSMC in terms of technology. SMIC began mass-producing 14-nanometer chips last year, but a recent report from Japan-based Nomura Securities said SMIC would need about one or two years to improve its 14-nanometer technology to a mature level.

By contrast, TSMC is able to produce 5-nanometer chips, which allows more computing power to fit in a given space.

For the first quarter this year, SMIC reported profits of $51 million on revenues of $905 million, according to an earnings report it released earlier this month.