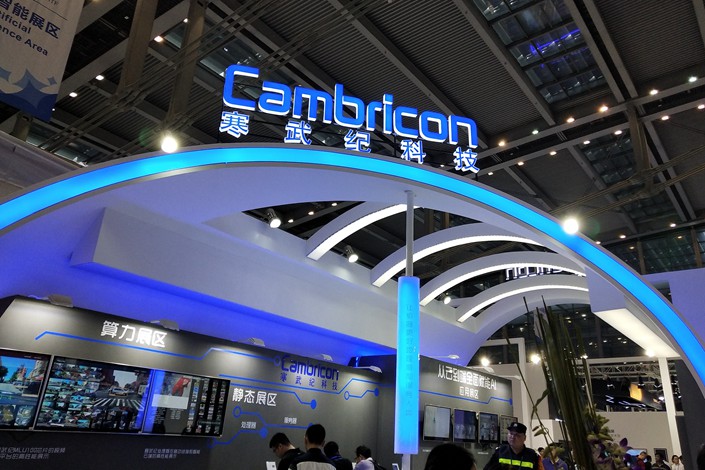 To achieve its expected income for this year, the domestic chipmaker is counting on big projects led by local governments.

The chipmaking unicorn startup said it predicts total revenues in the first six months to be 82 million yuan ($11.53 million) to 86 million yuan, down from around 98 million yuan for the same period last year.

Net losses after deduction of non-recurring gains and losses are estimated to be 270 million yuan to 300 million yuan for the first half, almost triple the figure in the same period in 2019, it told the regulator in response to a second-round query.

The four-year-old company applied to list on the STAR Market earlier this year, planning to raise 2.8 billion yuan for an estimated market value of more than 28 billion yuan. Citic Securities, Cambricon’s sponsor institution, gave the tech startup a valuation range of 19.2 billion yuan to 34.2 billion yuan based on its full-year earnings projection.

Shanghai Stock Exchange asked the firm to elaborate on reasons for the drastic change between its first-half and full-year predictions. Citic Securities did not specify to regulators the basis for its value estimation, though it declared the numbers would not constitute an earnings forecast.

To achieve its expected income for this year, the domestic chipmaker is counting on big projects led by local governments.

Incubated at the Chinese Academy of Sciences’ Institute of Computing Technologies, Cambricon was established in 2016 with a focus on building smart chips for AI applications, such as image recognition and natural language processing.

Selling the right to use its smart-terminal intellectual property (IP) to Huawei’s phone-making units was a major revenue source for the company before 2019. But as Huawei shifted to making its own smart chips, Cambricon’s IP business suffered a significant decline, estimated to be in the order of over 80% year-on-year to just 5.5 million yuan in the first half of this year.

Intelligent computing clusters, a business category that offers tailor-made computational solutions for big clients, contributed two-thirds of Cambricon’s revenue last year. This business is expected to become a major revenue source in wake of the decline in its IP business. It mainly involves orders from local governments and is predicted to be worth over 100 million yuan per project.

Cambricon told the regulator it had secured a 190-million-yuan order from a district government in Zhuhai, Guangdong province, to build a smart computing platform for local infrastructure and administration. If that deal, plus other computing cluster projects now under negotiation, could be closed this year, second-half revenues could see a substantial boost. It estimated the income from such projects could exceed last year’s full-year income of 300 million yuan.