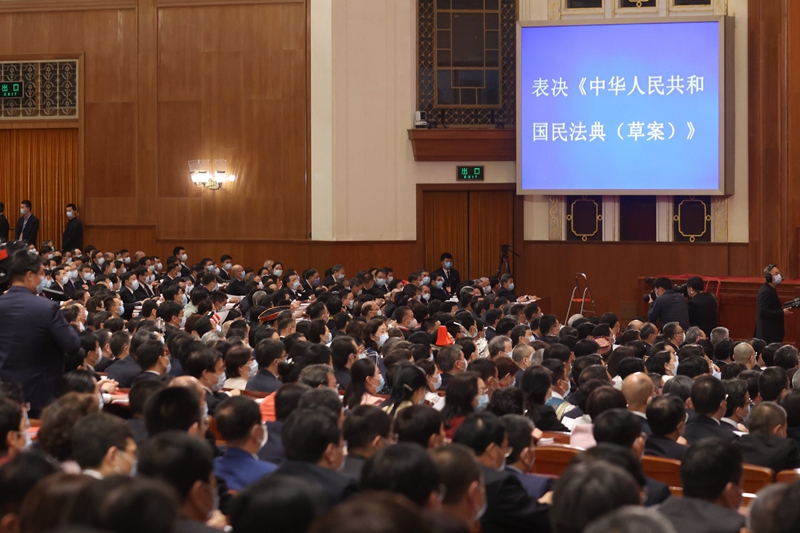 The wide-ranging legislative package, which will take effect at the beginning of next year, covers areas including private property, personal privacy, marriage and family, inheritance, and contracts.

Dubbed an "encyclopedia on social life," the new civil code aims to provide legal protection for Chinese citizens from cradle to grave. With provisions highlighting property and privacy rights, the document also reflects China’s commitment to empower the private sector at a time when the world’s second-largest economy and most populous nation is battered by the coronavirus pandemic and a deepening slowdown.

“The civil code is not just a political slogan, but something that really matters to every individual,” said Sun Xianzhong, a civil law scholar and a deputy of the National People’s Congress who participated in the drafting of the civil code. The birth of the civil code is key to improving China’s governance system and capability, Sun said.

The new code is an amalgamation of existing civil laws and sprawls across seven chapters and 1,260 articles. It is the first time the People’s Republic of China has codified its legal system. Amendments were made to better address privacy protection, clarify property rights, support the vulnerable in sexual harassment cases and spell out rights of unborn children.

Read More
Editorial: China’s New Civil Code Will Be a Cornerstone for Reforms

To ensure that the new code contributes to a better business environment, lawmakers used criteria in the World Bank’s “Doing Business” report as reference for drafting articles related to business guarantees, people close to the drafting process told Caixin.

Experts said adoption of the legislation is a crucial restraint on the government's power as it draws a clear boundary between government and markets. The civil code clearly outlined citizens’ rights that are under legal protection and should be respected by the state, said Xie Hongfei, a law scholar at the China Academy of Social Sciences who was involved in drafting the code.

It has been a long haul for China to set up its first civil code. Since the country’s founding in 1949, four attempts have been made. The version that was finally adopted was six years in the making.

Before the completion of a unified civil code, China developed a patchwork civil law system with fragmented legislation. In 1986, lawmakers enacted a rudimentary measure labeled the General Principles of the Civil Law, which laid the foundation for protecting civil rights. In 1999, China passed a contract law and then in 2007a property rights law. But gaps and inconsistencies exist between the different pieces of legislation. An overarching framework for civil rights was much needed as China continues to deepen economic restructuring and strengthen the rule of law, experts said.

In 2014, the Communist Party’s 18th National Congress called for progress in drafting the unified civil code, and a legislative process that was suspended for more than a decade resumed the next year. In March 2017, approval of the General Provisions of the Civil Law — a preamble to the civil code — marked a milestone in delivering a full-fledged civil code.

Lawmakers spent the following years integrating the existing fragmented bits of civil legislation into a single code. But drafting an effective civil code not only involves consolidating existing laws but also requires a careful study of previous reforms to China’s civil law system and deliberation on how to align the legal system to keep pace with rapid social and economic modernization.

The Covid-19 outbreak delayed approval of the civil code for nearly two months as the annual legislative meeting was delayed, but it also allowed lawmakers to further deliberate and modify existing laws to reflect the impact of the pandemic.

At the same time, the new code leaves some issues unresolved that legal professionals must continue working on, experts said. For instance, although the new civil code emphasizes the protection of personal information under personality rights, it fails to define that as an inherent right for everyone, said Shi Jiayou, a law professor at Renmin University in Beijing.

The completion of the civil code marks a key step forward in China’s long-sought judicial reform and the pursuit of rule of law. But its real impacts will mainly depend on enforcement, experts said. It will rely on the capacity and wisdom of judges and courts to test the power of the code in practice, they said.

Read More
China Must Get a Grip on Data Collection in Wake of Covid-19, Lawmaker Says

Here are some highlights of China’s first civil code:

The new civil code devotes one entire chapter of the seven to addressing personality rights, a move applauded by many legal experts as a major breakthrough.

The charter outlines people’s rights to name, title, portrait, reputation and privacy while adding new articles on protecting personal information. The emphasis on personality rights reflects the need to cope with challenges emerging with new technologies such as data collection, biometrics recognition and gene editing.

The legislation places “private life” under legal protection and includes personal email, travel history and biometrics information in the scope of personal information that should be guarded by law.

But there are also compromises in the code’s efforts to protect privacy. Compared with the European Union’s General Data Protection Regulation (GDPR), which is considered the toughest privacy and security law in the world, China’s new civil code falls short in regulating how long data collectors can keep people’s information and under what circumstance they must delete data, said Renmin University’s Shi.

In the chapter concerning property rights, the civil code defines separate rights to contract rural land and to do business on the land, laying the legal groundwork for a long-anticipated reform to free up the rural land market by making it easier to transfer land-use rights.

The new code also addresses a key property issue that concerns every Chinese family — what they should do after the 70-year land-use right expires for their home. Land is ultimately owned by the state in China, and residences normally have a 70-year land usage right. As the first wave of expirations approaches, people are eager to know what they should do with their homes.

The new code reaffirms that land use rights for residences will be automatically renewed after expiration but left it vague whether homeowners need to pay for renewal or obtain it free.

The legislation also spells out homeowners’ rights, including their entitlement to income generated from their properties such as advertisements. In practice, most such revenues have gone to property managers with little disclosure to homeowners.

Protecting renters by recognizing the right of habitation

The civil code for the first time offers legal status to the right of habitation, 20 years after legal experts called to separate the rights of property occupation and ownership to protect the rights of renters, especially the elderly and vulnerable people. With the new legal framework, landlords will no longer be able to evict tenants before a lease expires.

The change addresses the issue that an increasing number of Chinese people have faced difficulties buying a home amid surging housing prices, experts said. It also lays the legal groundwork for the country to develop a reverse mortgage system to support its increasingly aging population, they said.

But how the right will be enforced and how the new law will affect China’s housing market will take time to unfold, said Meng Qinguo, an expert involved in drafting the civil code.

More patience in divorce and stronger weapons against sexual harassment

Controversially, the civil code institutes a 30-day “cooling-off period” for divorce filings to deter impulsive decisions as the country experiences a rising divorce rate. But some people argued that the requirement may only lead to longer suffering in failed marriages.

During the drafting period, lawmakers collected more than 1 million comments from the public regarding marriage and family issues. The adopted version includes 79 provisions covering such matters.

The civil code adjusts China’s existing Tort Law to ensure justice in tort cases. Over the years, there have been many cases triggering public uproars when people who went to the aid of others or sought to stop violations were later accused of causing damage. The changes will prevent people with good and legal purposes from being wrongfully punished in such cases.

The code also adds “ecological destruction” as a liability for compensation in addition to environment pollution. The addition will expand claims over activities that damage the environment and will allow civil cases to be filed against violators in the public interest, experts said.