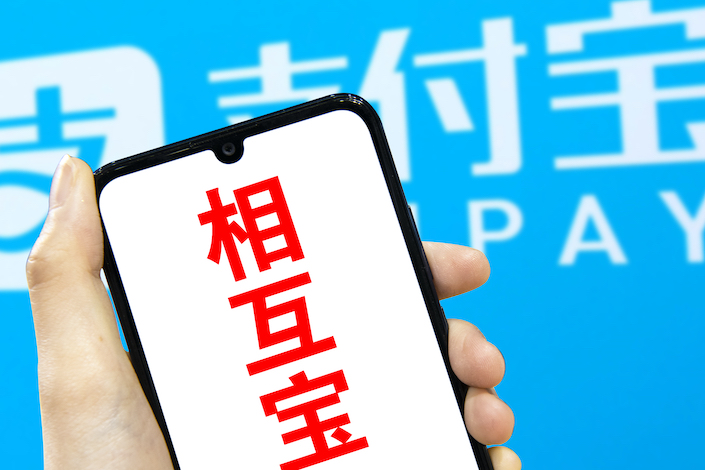 Alipay’s Xiang Hu Bao provides members as much as $42,000 to cover medical bills for critical illness including Covid-19 for as little as $4 a year.

The emerging market is dominated by Xiang Hu Bao, an online mutual aid platform with more than 100 million members that was introduced in October 2018 by Ant Financial Services Group’s online payment platform Alipay. About a dozen second- and third-tier players, including internet giants Baidu Inc., ride-hailing giant Didi Chuxing Technology Co. and a startup backed by Tencent, have jumped on the bandwagon.

Under the online mutual aid programs, participants share the risk of becoming critically ill and collectively bear related medical expenses. On the Xiang Hu Bao platform, for example, participants with an eligible claim can receive a one-time payout of as much as 300,000 yuan. In 2019, each member paid 29 yuan. This year, Ant Financial capped member payments at 188 yuan — about the cost of two KFC bucket meals. Xiang Hu Bao sets an age limit of 59 for eligible members to exclude high-risk populations and ensure that the claims and payout amounts are controllable.

The new mutual aid systems fill a hole in China’s national health-care coverage. Although the government-backed medical program covers 95% of the nation’s 1.4 billion people, out-of-pocket costs can vary dramatically depending on region and employer. Basic plans may reimburse only up to 85% of inpatient costs, and people may have to wait months or even years to get repaid as some municipalities, mostly in less-developed regions, run deficits in their public health-care plans.

Urban employees of state-owned and private enterprises have mandatory basic coverage funded by employers and by contributions from their salaries. For seniors, unemployed people or those on social assistance, coverage is subsidized by the state. Rural populations can join voluntarily join cooperative medical insurance plans that are similar to the mutual aid programs but are government-subsidized.

Residents under rural plans are reimbursed far less than those with urban plans. This often leaves individuals saddled with significant out-of-pocket expenses.

A 2015 survey in China by global consulting firm EY found that more than a third of respondents said public health insurance was unsatisfactory, and only 14% said they had enough savings to cover unexpected health emergencies. That’s where private insurance kicks in. The private insurance market is expected to exceed 5 trillion yuan by 2020. The government is also encouraging private health-care providers by relaxing regulatory restrictions and providing tax incentives to consumers.

In online mutual aid programs, the platforms take only about 8% for administrative fees. For comparable coverage, mutual aid products cost much less than conventional insurance. Even though the coverage and 300,000 yuan maximum payout of Xiang Hu Bao are less generous than what’s provided by many traditional critical illness policies, the 188 yuan premium-like contribution by each member is a bargain.

In an opinion on deepening restructuring of the medical insurance system issued by the State Council in February, the cabinet pledged clear support for the development of the medical mutual aid industry.

By 2025, China’s online mutual aid industry is expected to reach 450 million users, or nearly a third of the country’s population, according to the Research Institute of Ant Financial’s “Online Mutual Aid Industry White Paper.”

Even though fintech companies emphasize that the mutual aid programs aren’t health insurance, the surge in participants has had an impact on the traditional insurance industry. Building on existing user bases, internet platforms have been able to attract large number of members in a short time at relatively lower costs than insurers, which largely rely on salespeople to peddle policies offline.

At the same time, industry participants say mutual aid products have not had a disruptive impact on the existing insurance market. Yin Ming, a vice president of Ant Financial who oversees Xiang Hu Bao, has repeatedly said the product complements premium health insurance offerings in the market.

Users of online mutual aid programs in China are primarily from low- or middle-income households that cannot afford big medical expenses. More than two-thirds of Xiang Hu Bao participants earn less than 100,000 yuan a year, while a third come from rural areas. Providing health-care coverage for these people actually “makes the cake bigger” and educates people on the concept of commercial health insurance, Yin said.

At present, the quantity and type of health-care insurance products are not enough to meet everyone’s demand, so mutual aid programs actually expand the overall market, an executive at a mutual aid platform said.

Some conventional insurers are mulling whether to launch their own online mutual aid products or enter the already-crowded emerging market by acquiring existing platforms. But the potential conflict with their insurance products has made some hesitate to do so.

In January, Ping An Insurance, the largest insurer in China by market value, launched two mutual aid products, one for cancer and one for senior fracture coverage. But both products failed to attract enough members to make individual contributions affordable.

Unlike insurers, mutual aid platforms are not licensed by the China Banking and Insurance Regulatory Commission (CBIRC), and they do not need to comply with the tough capital requirements or other risk management rules that apply to traditional insurers. The regulator requires only that such platforms can’t call themselves insurance, can’t guarantee payment, can’t claim to be regulated by the government and can’t illegally raise money.

As with busted peer-to-peer (P2P) lending platforms, there are also collapsed mutual aid programs that had more claims than healthy members remaining in the group and couldn’t pay the claims.

At the annual “Two Sessions” of China’s top legislature and political advisory group last month, legislators and advisers proposed that the mutual aid industry should be included in the CBIRC’s regulatory framework

The CBIRC should establish an innovative regulatory approach to the emerging industry to prevent a crisis like the one in the P2P lending industry, according to by Zheng Bingwen, director of the World Social Security Center at the Chinese Academy of Social Sciences.

An executive at a mutual aid platform said there are no standard operating norms even as the industry has developed into a market with hundreds of millions of participants. Regulators should define regulatory boundaries of these platforms’ operational scope, consumer protection and information safety, the executive said.

Some platforms attracted members through the promise of broad coverage of illness and payouts of as much as 1 million yuan but then changed the contracts once members signed on, an industry insider said.

There is also a lack of legal basis on how to resolve claim disputes arising from mutual aid platforms. Even though such products claim they are not insurance, some courts still treat them as such.

The CBIRC conducted a survey of mutual aid platforms earlier this year, Caixin learned. Industry participants said that before a formal law is enacted, an industry association should be established to define what these platforms can and can’t do.