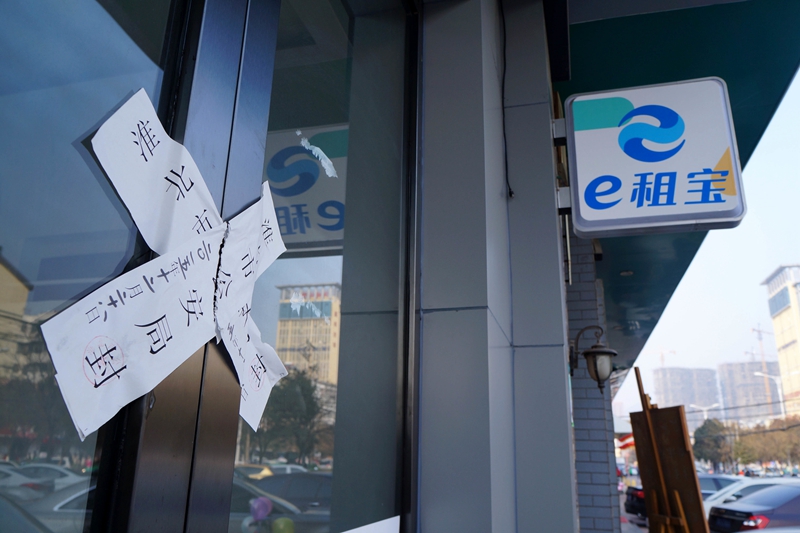 Leading P2P site Ezubao was shut down by regulators in late 2015 amid a crackdown on industry risks. Photo: VCG

China’s nearly four-year campaign to crack down on risks in the scandal-ridden peer-to-peer (P2P) lending industry has put the once-booming sector almost back to square one. Now, the few survivors face an uncertain future.

There is no sign of relief for P2P lenders. On Nov. 4, Cui Yilong, the controlling shareholder of P2P lending platform Xianhuahua Yiyiyuan, was detained by police in Beijing, along with dozens of the company’s employees. The businesses of the P2P portal and an affiliated lending site yaoyuefu.com were suspended.

Cui’s companies are among more than 2,000 P2P platforms that have failed since early 2016 amid a regulatory cleanup that has led to a dramatic contraction of the industry. The number of functioning P2P sites fell to 427 by the end of October from more than 3,600 in November 2015, according to the China Banking and Insurance Regulatory Commission (CBIRC).

Outstanding loans held by the platforms were just 590 billion yuan ($83 billion) at the end of October, nearly half the peak of 1.3 trillion yuan in late 2017, according to Wangdaizhijia, an online lending research portal.

Those that exited the business either collapsed in the regulatory clampdown or pulled out voluntarily, while remaining players are struggling to transform their business.

Even some of the largest companies were unable to make it through. Tuandai, a leading player that started business in 2012, was investigated by police for allegedly taking public deposits illegally after controlling shareholders turned themselves in. Another of the earliest players, Hongling Capital, voluntarily terminated its business in April and started liquidating assets. New York-listed FinVolution Group, formerly known as PPDAI Group Inc., shifted its focus to institutional investors.

Recent signals from policymakers indicate an even gloomier outlook for P2P lenders as regulators show growing wariness of the industry, analysts said. P2P lending risks are still far from being cleaned up, a regulatory official said.

Last week, Ping An Insurance (Group) Co. of China Ltd.-backed Lufax Holding Ltd., one of China’s largest P2P lending platforms, said it won regulatory approval to set up a consumer finance business, a key step in a business transition plan announced in July. Lufax’s plan to get out of P2P lending is seen by analysts as a sign that the P2P sector is moving toward an end.

But not every P2P lender has the same financial backing as Lufax to support a business transition, and options facing them may be limited. Regulators will study the remaining 427 P2P platforms case by case to decide their future by the end of this year and encourage those with strong financial and tech capacity to restructure into online microlenders or consumer finance firms, said Li Junfeng, the director of the inclusive finance department of the CBIRC, at a Nov. 12 press briefing.

“The main goal is winding down, and the main direction is (for P2P sites) to exit,” Li said.

The idea of P2P lending, which originated in the U.K., was to match individual lenders and borrowers through third-party platforms. The P2P sites are supposed to act as information intermediaries that provide only services such as credit assessment and information matching.

The business model was introduced to China in 2007 and began an explosive growth in 2013 reflecting the country’s huge demand for small loans among private borrowers who have limited access to bank lending.

The reckless expansion of P2P sites caught regulators’ attention after some prominent platforms imploded because of fraud or lax management and risk controls, leaving investors with billions of yuan of losses.

One of the most notable failures was Ezubao, once China’s largest P2P site, which collapsed in late 2015 and was accused of bilking about 900,000 people out of more than 50 billion yuan in less than two years. Key Ezubao employees were sentenced to prison in 2017 for various crimes including fundraising fraud, smuggling precious metals and illegally owning guns.

In August 2016, the top banking regulator slapped the P2P sector with a set of new rules requiring lenders to stick to their nature as information intermediaries and setting restrictions on their lending and fund-management practices.

The regulations forced P2P platforms to choose between restructuring and closing as 95% of them failed to meet the requirements. Most companies expected to remain in business after a rectification.

But the regulatory environment for P2P lenders turned even tougher since late 2018 after a new wave of business failures. The pace of business closures accelerated this year, analysts said.

Although a clampdown on P2P lenders started in early 2016, it wasn’t until the second half of 2018 when more P2P sites imploded that local governments — which are responsible for regulating local P2P sites — initiated closer inspections and found that most sites had very poor asset quality and engaged in misconduct, said an online finance regulatory official.

Between October and November, several provincial-level governments, including Hunan, Shandong, Henan and Chongqing, slapped blanket bans on local P2P lending businesses, saying not a single company operating in their regions complied with regulations and passed scrutiny.

Analysts said leeway for P2P lending in other regions such as Zhejiang and Shanghai is narrowing.

Police also enhanced law enforcement against violators in the industry. Since October, several P2P sites including Xianhuahua. yiyiyuan and 51 Credit Card Inc. have been probed for privacy and loan collection violations.

Despite the regulatory storm, there are people who still want to stick with the business. Li Yong, founder of Hebei-based Qingyidai, pledged that his company fully complies with regulations. P2P sites like Qingyidai provide financing services to small and micro enterprises, and a crackdown on the qualified players will undermine such services, Li said.

For companies like Qingyidai that want to stay in the market, a business transition is likely to be the only choice.

Large players such as Lufax are eyeing the consumer finance business. Caixin learned that a P2P unit of fintech conglomerate 9F Group invested in a major stake in a Hubei consumer finance company while another leading P2P site is seeking a consumer finance joint venture with foreign partners.

But for many smaller P2P lenders, a transformation to seek a license for microlending — which often has lower capital requirements than consumer financing — may offer an easier solution.

A business transition means that most P2P sites must put up more capital and reduce their leverage to meet industry requirements. P2P sites are currently subject to no requirements on capital and leverage ratios, but the November policy required them to put up 50 million yuan to 1 billion yuan of registered capital in cash depending on the region where they operate after transitioning to microloan companies and keep their leverage ratio below 5.

For P2P sites with billions of yuan in transition, a leverage ratio of 5 is a high bar, analysts said.

Some industry insiders say they expect the rollout of a national P2P registration system to allow the industry to survive under proper oversight. Financial regulators have proposed a national regulatory framework, which has yet to be unveiled. Caixin reported in early April that the long-expected pilot program for P2P registration in a national monitoring system will start soon this year.

But little progress has been made public since then, sparking concerns about uncertainties. Caixin learned that regulators have made several revisions of draft requirements for the registration pilot program regarding P2P sites’ risk provisions, deposits, shareholder qualifications and others.