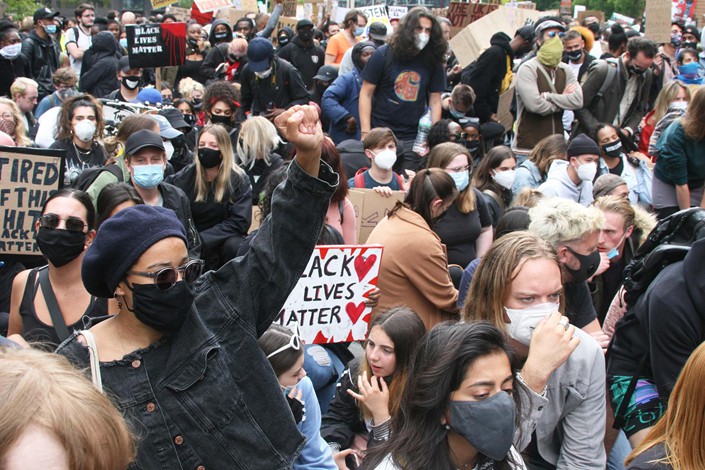 Protesters outside the U.S. Embassy in London on June 7.

Two weeks of massive, nationwide demonstrations against police violence and racial bias have raised concerns about a second wave of Covid-19 infections in the United States. It’s hard to engage in a collective display of righteous anger over George Floyd’s killing at the hands of the Minneapolis police and remain 2 meters apart from one’s fellow protesters. And mask-wearing is less than universal among the demonstrators, just as it is among the U.S. public generally. This doesn’t bode well for public health or the economy.

But while it has been widely noted that the social turmoil unfolding in the wake of Floyd’s death may worsen the already-acute Covid-19 crisis, the connection running in the other direction – from the pandemic to the demonstrations – has received far less attention. Without diminishing for a moment the horror of Floyd’s death, the question is: why now?

After all, before Floyd, there was the police killing of Michael Brown in Ferguson, Missouri, in August 2014. The previous month, there was Eric Garner in New York City, who died in a police chokehold, despite pleading, like Floyd, “I can’t breathe.” A recent National Public Radio segment was fronted by the names of nearly 100 African-Americans who died in police custody over the past six years.

That is because of America’s threadbare social safety net. Unemployment insurance benefits are typically limited to 26 weeks in the U.S. Certain states in the South provide fewer. Indeed, some, such as Florida, have intentionally designed their bureaucracies to make applying for unemployment benefits as difficult as possible.

Other states, again mainly in the South, have not extended Medicaid eligibility to low-income people, as permitted by the Affordable Care Act. Likewise, Senate Majority Leader Mitch McConnell (from the Southern state of Kentucky) is leading the fight against another round of pandemic-related emergency support for the poor and unemployed.

The dominant explanation, developed in part by the late economist Alberto Alesina, for America’s lack of a social-welfare state along European lines is its history of racism. Alesina showed that race is the single most important predictor of support for welfare in the U.S., and that opponents of welfare-state policies have long used race-based rhetoric to mobilize their supporters.

Alesina also demonstrated that redistributive policies that disproportionately benefit members of minorities are unappealing to members of the majority, who lack a sense of solidarity with the poor. The South, with its history of slavery and Jim Crow, is where this cleavage runs deepest.

Some will question an argument linking 21st-century social problems to this “ancient history.” But researchers have shown that U.S. counties with more lynchings between 1882 and 1930 have more black-white inequality and higher mortality rates today.

Countries with different histories from the U.S. have more extensive welfare states. For this reason, they are less at risk, it would seem, of a social explosion. So argued European Commission Vice President Margaritis Schinas earlier this month.

Schinas’s assertion, of course, skips lightly over racial grievances in Europe, such as in France’s banlieues. It ignores widespread hostility toward immigrants and refugees, especially those from Africa. No matter, Schinas presumably would reply. The welfare state was created before race became a major issue in Europe. It is a fact on the ground. It is not going away.

But recall the British exception. First, in 1942, came the Beveridge Report, the founding document on which the British welfare was erected. But then came successive waves of immigration from the Caribbean and South Asia, which created the perception, if not also the fact, of ethnic fractionalization. And then came Margaret Thatcher, the dismantler of the welfare state.

Europe can do better, perhaps, but its leaders should not fool themselves that they won’t have to work at it.