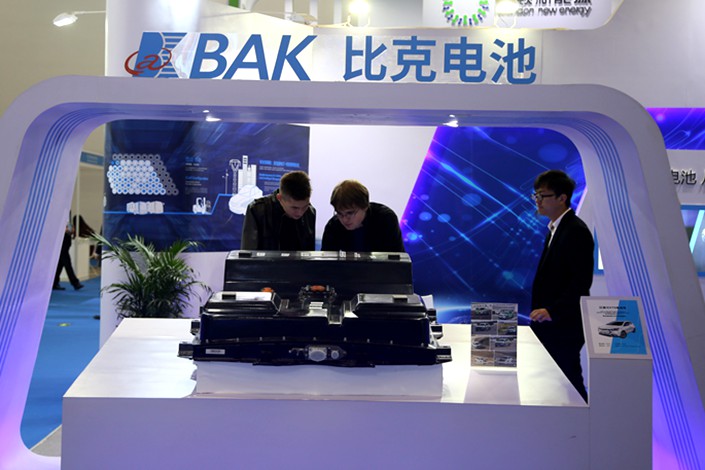 As sales decline and companies are forced to survive on their own, names like BAK, Hawtai and Zotye are being forced to the brink of extinction.

Second-tier battery-maker BAK Power is struggling to pay its component suppliers, in the face of a cash crunch after two of its largest customers, both new-energy vehicle (NEV) makers, failed to pay more than 900 million yuan ($127 million) in bills.

BAK’s woes have been detailed in a series of announcements from some of its suppliers that have gone unpaid. The company is part of a broader chain of NEV manufacturers and component suppliers coming under strain as China’s bloated sector suffers from massive overcapacity built up during an earlier period of generous government support.

After Beijing sharply curbed that support midway through last year, the sector has begun to consolidate around stronger, top-tier players like U.S. giant Tesla and China’s own BYD Auto, which is backed by billionaire investor Warren Buffett. More marginal players are increasingly unable to sell their wares and pay their suppliers, creating cash flow difficulties for companies like BAK.

In the latest sign of BAK’s troubles, Ningbo Ronbay New Energy Technology Co. Ltd., a supplier of ternary cathode material, said it had yet to receive the full payment of 209 million yuan that was due from BAK on June 15, according to a Sunday announcement (link in Chinese). Ronbay said BAK was its second largest customer in 2018.

BAK Vice President Li Dan told Caixin the company is facing its own cash crunch because of big outstanding payments owed by two of its own largest customers, Hawtai Motor and Zotye Automobile Co. Ltd., which collectively owe it more than 900 million yuan.

Zotye owes the bigger sum of 621 million yuan, and last October BAK sued the company to recover the money. BAK said in November it was owed another sum of more than 300 million yuan by Hawtai, and has also sued to get paid those funds. BAK has already received a judgment in its favor in the Hawtai lawsuit, Li said, and is in the process of trying to collect the judgment. But no decision has come yet in the Zotye case.

BAK, as well as Zotye and Hawtai all suffer from their status as relatively marginal players in China’s overcrowded NEV market. Such companies could do relatively well when Beijing was giving out its generous subsidies to promote the sector, but are now struggling without the government support.

China’s overall NEV market has been contracting steadily since the second half of last year when Beijing made its sharp subsidy cuts. The declines reached a peak last fall, with October and November NEV sales nationwide tumbling about 45% each month, according to the China Association of Automobile Manufacturers. Since then the declines have moderated somewhat, but the most recent sales for May were still down more than 20% from a year earlier.

As sales decline and companies are forced to survive on their own, names like BAK, Hawtai and Zotye are being forced to the brink of extinction. Among battery-makers that BAK competes with, the industry is rapidly consolidating around the top two players, Contemporary Amperex Technology (CATL) and BYD.

Following its negative experience with Zotye and Hawtai, BAK has chosen to reduce its scale and avoid doing business with mid-sized and smaller carmakers in favor of more reliable partners, Li said. “We’ve already been bitten once, from now on we’ll only consider supplying to companies that offer very good prices and have good payment records.”

The company is also hoping to diversify into non-car products, such as two-wheeled vehicles and smart home furnishings.