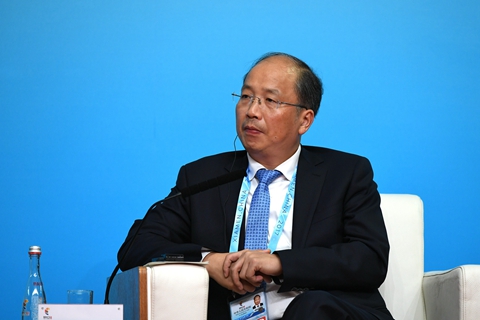 Yi’s comments come in response to a longstanding dispute between U.S. and Chinese regulators over access to audits of U.S.-listed Chinese companies.

Lately, concerns have mounted that American regulators can’t examine the books of these companies in the wake of Luckin Coffee Inc.’s financial fraud scandal. In April, the Nasdaq-listed firm admitted to inflating sales by around 2.2 billion yuan ($310.7 million) last year, triggering a backlash from American regulators and politicians against U.S.-listed Chinese companies, many of which do not grant U.S. audit regulators access to their audit working papers.

Chinese law stipulates that exchanging information, such as providing audit working papers for overseas regulators, should be conducted through regulatory cooperation and comply with security and confidentiality regulations, said Yi, who has served as chairman of the China Securities Regulatory Commission (CSRC) since January 2019. Carrying out joint inspections is a common practice of international cooperation on this issue, he added.

“As long as the U.S. side is truly willing to solve the problem, we can definitely find a way for China and the U.S to cooperate on audit regulation,” Yi said in the interview.

On May 20, the U.S. Senate approved legislation that would ban any company from being listed on any U.S. securities exchange if the Public Company Accounting Oversight Board (PCAOB), an auditing regulator, is unable to inspect the auditor that prepares the company’s financial reports for three years in a row. Although it applies to all foreign companies, the bill is clearly targeted at China.

In 2009, Chinese authorities issued a notice (link in Chinese) restricting overseas regulators’ ability to supervise auditors based in China, requiring any foreign watchdog that wants to conduct an onsite inspection of a Chinese company to first seek approval from relevant authorities including the CSRC. The order was made on the grounds of protecting national security.

If the Senate bill is approved by the U.S. House of Representatives and signed into law by President Donald Trump, it could threaten the listings of nearly 250 Chinese mainland- and Hong Kong-based companies whose shares are currently traded in the U.S. and whose auditors are under China’s jurisdiction, according to the latest PCAOB review.

The CSRC puts great importance on cross-border regulatory cooperation and has always maintained an open and cooperative attitude, Yi said.

Yi said that he understands and respects the U.S.’ regulatory concept of offering loose access while imposing stringent regulations on its capital market. Strengthening cross-border regulatory cooperation is the right way to solve problems in individual overseas listed companies, he said.

Despite recent noise from some U.S. politicians, the CSRC will continue to strengthen cooperation with U.S. regulators to maintain market order and protect investor interests, Yi said. Over the past years, the CSRC has maintained communications with the U.S. Securities and Exchange Commission and the PCAOB, and there have been several cases of successful cooperation, he said.