By Yang Ge and Yuan Ruiyang 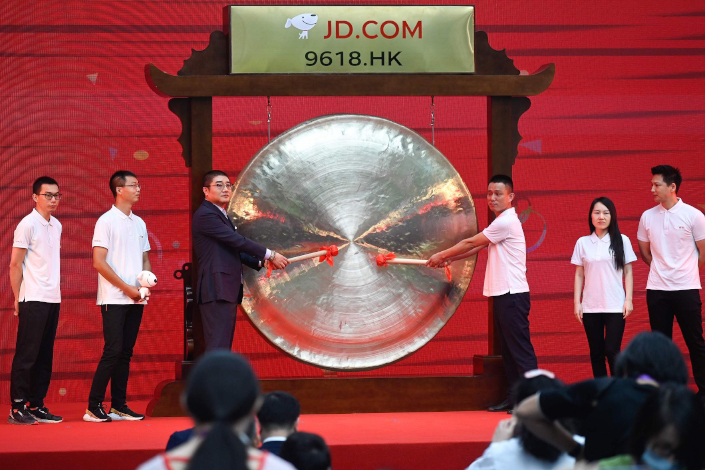 Shares of JD.com Inc. jumped in their trading debut in Hong Kong, as the e-commerce giant joined rival Alibaba and online game company NetEase Inc. to become the third major U.S.-listed Chinese company to make a secondary listing in the former British colony.

JD.com’s shares initially rose 5.75% from their listing price of HK$226 ($29.16) at the open, before giving back some of the gains during the morning session. The shares were still up 3.8% at the midday break. The HK$226 pricing had represented a 6.3% premium over the company’s last closing price in New York, where its American depositary receipts (ADSs) have traded since 2014.

The company raised $3.84 billion from the listing, which was heavily oversubscribed and marked the largest IPO so far this year in Hong Kong.

“JD.com’s secondary listing in Hong Kong represents a landmark transaction for a U.S.-listed Chinese company returning to its home market,” said Wang Lixing, head of the investment banking division at China Renaissance, one of the deal’s lead underwriters. “We expect that there will be more secondary listings and new share issuance activities in Hong Kong in the second half of the year.”

The strong debut came as Yum China, operator of KFC and Pizza Hut restaurants in China, was taking its own initial steps in pursuit of a similar dual listing, the Financial Times reported. Such a move would make Yum the first nontech player to join the growing wave of U.S.-listed Chinese companies looking to make their shares more accessible to investors in their home market.

Yum China, which was spun off from global KFC operator Yum Brands and listed separately in New York in 2016, is currently talking with banks about a potential Hong Kong listing that could raise up to $2 billion, the newspaper reported, citing an unnamed person with knowledge of the plans. The company has invited investment banks to pitch to be advisors for the potential deal on Friday, the report said.

Such listings are suitable for major Chinese companies that are trying to broaden their shareholder base, Jeans Jingqi Wang, managing director of Greater China Equity Capital Markets at Credit Suisse, told Caixin in an email interview.

“While a U.S. listing enables issuers to build profile with international investors, a potential second listing in Hong Kong can help to further broaden their shareholder base, such as to include day-to-day customers of their apps and services,” she said. “A second listing in Hong Kong also offers the benefit of 24-hour trading of the U.S.-listed American depositary receipts and the Hong Kong Stock Exchange-listed shares, leveraging the different time zones.”

The JD.com debut comes a week after NetEase shares began trading in Hong Kong following its IPO, which raised $2.7 billion. The Hong Kong Stock Exchange modified its rules in 2018 to allow for such listings, and Alibaba Group Holding Ltd. blazed the trail with its $12.9 billion Hong Kong IPO last November.

In addition to bringing Chinese companies closer to their home market, such listings may also be getting momentum from increasing hostility toward Chinese tech firms on Wall Street. That includes growing calls to subject the group to the same accounting oversight now required of all U.S.-based publicly traded companies.