Shanghai Gets Back to Business With Resumption of Major Trade Shows 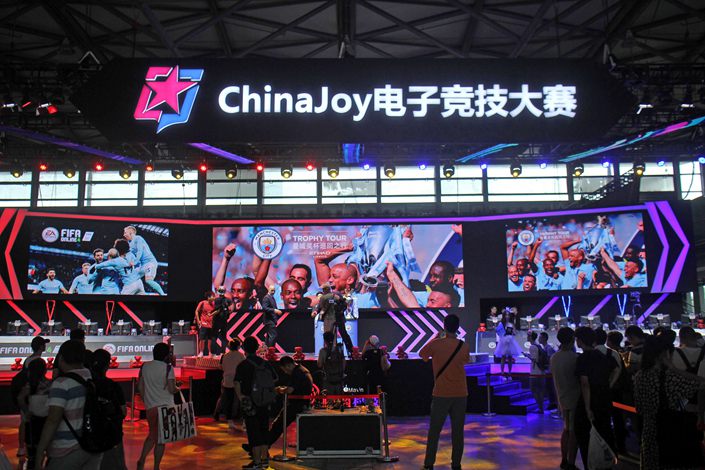 The e-sports stage of the ChinaJoy gaming exhibition in Shanghai on Aug. 5, 2019.

Shanghai has resumed staging exhibitions, trade shows and other major events, as disease prevention takes a back seat to business with the prolonged easing of the country’s Covid-19 epidemic.

The Shanghai New International Expo Centre’s website shows it held four exhibitions at the end of June, all on June 27-29, including Semicon China, a major semiconductor event. The site includes 14 events scheduled for July, including the China Digital Entertainment Expo & Conference, or ChinaJoy — the nation’s largest show for gamers and game companies set for July 31 to Aug. 3.

Another major event, the 23rd Shanghai International Film Festival, will take place later this month on dates still to be announced, after being delayed from its originally scheduled dates of June 13-22, several knowledgeable sources told Caixin. The event’s organizer issued a notice on May 5 stating its intention to delay, though a person who answered the phone at its media center declined to confirm any new timing.

Organizers have canceled or postponed most major events both inside and outside China since the magnitude of the Covid-19 pandemic started to become clear in late January and early February. One of the earliest major events to get scrapped was the Mobile World Congress set for the end of February in Spain, and the movement culminated with the decision for a one-year delay of the Tokyo 2020 Olympics that were originally set for this summer.

Within China, the nation’s top auto show was postponed from its original dates in April, and the annual meeting of the National People’s Congress, China’s legislature, was delayed from its usual timing in March until May.

While most of China has brought the epidemic under control, a notable exception has been a local outbreak that began three weeks ago in Beijing. That outbreak, which has been linked to a major wholesale market, resulted in more than 200 new cases being added to the city’s total, though the number had dropped to just three new daily cases on Wednesday.

But that outbreak has raised concerns among Shanghai event organizers, many of whom are requiring that visitors and exhibitors from Beijing provide evidence of testing negative for Covid-19 within the previous seven days.

Among the major events now moving ahead in Shanghai, ChinaJoy is one of the largest. On June 29 the event organizers outlined preventative steps they would take on their WeChat public account, including the negative test requirements for anyone from Beijing. They said anyone coming from low-risk areas wouldn’t face restrictions. The event hosted 364,700 visitors last year and nearly 300 exhibitors, both from China and abroad, according to its official numbers.

Shanghai officially canceled all large-scale events in the city after raising its emergency response alert to the highest level at the end of January.

As China’s national rate of new infections came under control, the State Council published guidelines on May 8 laying out steps like advance booking and crowd control as conditions for important meetings and exhibitions to proceed. Shanghai’s own exhibition association unveiled its own guidelines four days later, calling on organizers to require real-name registration of all participants and to control the number of people at such events.