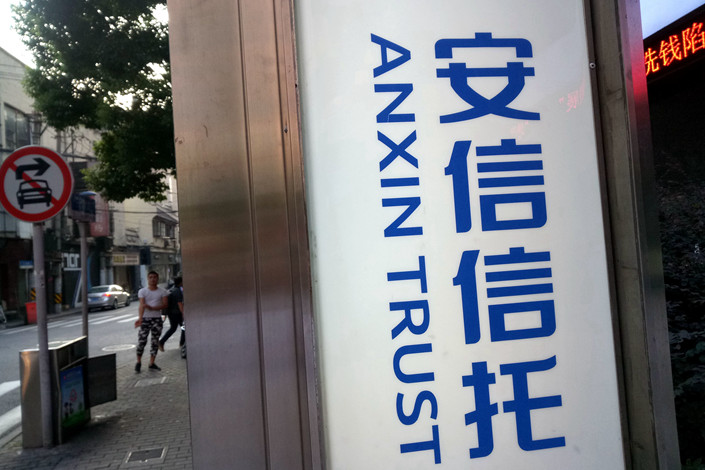 Shanghai-listed Anxin Trust Co. Ltd. was once lauded as China’s most profitable trust company. That was before a 50 billion yuan ($7 billion) financial black hole appeared in its books, along with mounting defaults and opaque operations that have regulators seeing it as a troublemaker.

The dramatic reversal took place over less than two years, but the risks have been quietly brewing for much longer. The collapse of Anxin brought to light a dark corner of China’s 20 trillion yuan ($2.8 trillion) trust industry where billions of dollars of investments were misappropriated to benefit the biggest shareholders and their affiliates.

The effects of Anxin’s troubles may ripple through the industry as financial regulators focus on risks linked to trust companies’ loosely regulated financing activities, a market of 6 trillion yuan. In June, the China Banking and Insurance Regulatory Commission (CBIRC) ordered several trust companies to halt businesses involving loan-like trust plans while asking others to reduce the volume of such businesses by no less than 20%.

“There will definitely be companies dead due to the policy,” one executive said.

But a CBIRC official told Caixin that the policy target was set after careful assessments of the industry’s conditions and is feasible.

Anxin, one of only two trust companies listed on mainland bourses, was a high-flying business star and ranked at the top of the industry in 2017 with 5.6 billion yuan of revenue and 3.7 billion yuan of net profit. The company is majority-owned by Shanghai Gorgeous Investment Development Co. Ltd., a company controlled by businessman Gao Tianguo.

Gao, 69, is a Sichuan native who served in the military and later started business in the real estate sector. He set up Shanghai Gorgeous in 1999 as an investment and financing vehicle. Gao is part of a deeply entangled business web formed by a number of businessmen from Dazhou, Sichuan province, several financial industry sources told Caixin. The network is known as the “Dazhou gang.” Authorities detained Gao in May in a probe of illegal lending.

Anxin’s troubles began emerging in 2018 when it posted a 96.3% drop in revenue and a 1.8 billion yuan net loss amid a government crackdown on the industry aiming to reduce risks for investors, sliding from first to worst in the industry and triggering an exodus of top executives.

“The business was booming during the first half of 2017 but started losing steam in the second half due to tougher regulation,” an Anxin employee said. “All the risks started to be exposed in 2018.”

In April 2019, the company failed to repay 2.8 billion yuan to investors in a trust plan, setting off a cascade of defaults. In 2019, Anxin reported revenue of a negative 267 million yuan and a net loss of nearly 4 billion yuan. Its Shanghai-traded stock faces the risk of being delisted.

In late 2019, the Shanghai branch of the CBIRC sent representatives to Anxin to closely monitor its business operations and ordered Anxin stop issuing new products, Caixin learned. In May this year, Gao was investigated. Yang Xiaobo, Anxin’s former president who resigned in October 2019, was also detained.

Audits of Anxin’s assets found that the company had nearly 200 billion yuan under management with nearly 80 billion yuan of unpaid debts as of the end of June. Anxin is unable to repay its debts with its assets, leaving the 50 billion yuan black hole on its books, auditors found.

As Anxin is incapable of resolving its own problems, the Shanghai city government stepped in to push forward a restructuring of the company and seek new investors. Caixin learned that state-owned Shanghai Electric Group Co. Ltd., Shanghai Rural Commercial Bank Co. Ltd., Shanghai Guosheng Group Co. Ltd. and Shanghai International Airport Co. Ltd. are in discussions on the restructuring, but no plan has been finalized.

As the situation at Anxin escalates, several other trust companies are also embroiled in debt troubles. Sichuan Trust Co. Ltd., a close business partner of Anxin, reportedly has a capital hole of more than 20 billion yuan, affecting 8,000 investors.

Regulators have singled out six trust companies including Anxin and Sichuan Trust for a crackdown on risk, sources told Caixin.

“Owners of these trust companies may have raised money for each other,” a person close to the regulatory body said. “Anxin is the earliest to expose the risks, and it is the most severe one.”

Shanghai’s banking regulator in April said Anxin was found to have illegally misappropriated investments in trust products, concealed product risks when promoting them to investors and created huge payment risks by guaranteeing returns to some investors. The regulators suspended part of Anxin’s business and fined the company 14 million yuan for violations.

Anxin became a platform for Gao to raise funds for his own businesses and misappropriate proceeds from trust product sales, a person with knowledge told Caixin. Gao’s Shanghai Gorgeous intervened in Anxin’s operation and management, completely ignoring internal controls, the person said. Caixin was unable to reach Gao for comment.

Regulators confirmed that at least some of a 6 billion yuan trust plan managed by Anxin was misappropriated, Caixin learned.

In 2002, Shanghai Gorgeous entered the trust industry by acquiring 20% of loss-making Anshan Trust from the city government of Anshan in northeast China’s Liaoning province.

Two years later, the company was renamed Anxin and relocated to Shanghai. As of March 2020, Shanghai Gorgeous owned 52.44% of Anxin. The second-largest shareholder is China Securities Finance Corp. Ltd., with 4.41%.

In December, Hengfeng’s former Chairman Jiang Xiyun was sentenced to death on corruption charges, including receiving bribes from Gao in exchange for favors in purchasing a stake in the bank and loan issuance.

“Most of the funds (are invested in) the boss’s (Gao’s) projects,” he said.

Several industry sources told Caixin that Anxin has around 150 billion yuan under active management, of which nearly 100 billion yuan was funneled to projects owned by or related to Gao. Most of the projects are property developments in small cities, stock placements and equity pledge financing. The investments were largely misaligned as they use short-term funds for long-term projects, sources said.

In addition, Anxin has illegally guaranteed returns for several trust plans backed by Shanghai Gorgeous assets involving 90 billion yuan, a person close to regulators said. Such practices got Anxin into more than 40 lawsuits with 32 institutions over its guarantees for defaulted debts.

A large number of Anxin’s trust plans were invested in projects related to a company called Shanghai Yat Cci Capital Ltd., which runs businesses in the property and photovoltaic (PV) industries. Police have launched an investigation into the relationships among Anxin, Shanghai Yat Cci and Shanghai Gorgeous, Caixin learned.

Several people close to Anxin said Shanghai Yat Cci is ultimately controlled by Gao. Public records showed that since 2014, Anxin has raised around 70 billion yuan through 50 trust plans for projects backed by Shanghai Yat Cci and its affiliated companies. The outstanding value of the products is more than 40 billion yuan, though most of them have recorded huge losses.

The business of Anxin and Gao is closely linked to a group of entrepreneurs that includes Li Qin, who appeared in business registration records as Shanghai Yat Cci’s controlling shareholder; Liu Canglong, chairman of Hongda Group who controls Sichuan Trust; Wuhao, chairman of Wantton Group; and Yang Tianming, a Sichuan developer.

Dubbed the Dazhou gang, the group of businessmen is tied to each other through business deals, loans and investments. For instance, Sichuan Trust holds the second-largest stake in Shanghai Gorgeous through a majority-owned unit. It also appeared as a shareholder of Shanghai Yat Cci.

“Yang knew Gao in the early days and introduced Gao to Liu and others,” said a person close to Anxin. “Then all of them bonded together.”

“It was an open secret” that these companies helped each other raise funds by selling trust products, a Sichuan Trust employee said.

Yang, Liu and Wu have debts to Anxin that haven’t been repaid for years, a person close to the matter said. The companies have complicated debt links with loans to one another.

“They lock each other up,” the source said.

Cleaning up the mess

Shanghai authorities have stepped in hoping to clean up the mass and bail out Anxin through a restructuring. Anxin posted a filing May 29 saying it was discussing a restructuring with a group of companies led by Shanghai Electric.

The financial mess at Anxin has turned away several previous potential saviors invited by the Shanghai government, Caixin learned. So far, the government’s efforts to get private conglomerate Fosun International, Bank of China Group Investment Limited and Shanghai Industrial Holdings to take part in a restructuring have failed.

Caixin learned that a temporary Communist Party committee was set up at Anxin consisting executives from Shanghai Electric and other potential investors as well as regulatory officials to oversee the company’s operations. An assessment of Anxin’s assets and debts is underway.

Auditors confirmed that Anxin is insolvent with a capital hole of as much as 50 billion yuan. The company’s only remaining asset that may generate capital is an equity interest worth about 30 billion yuan in a Shanghai land tract, meaning there would still be a 20 billion yuan shortfall.

Zhu Liangtao contributed to this story.