Editorial: College Impostor Scandal Must Be Met With Harsh Punishment 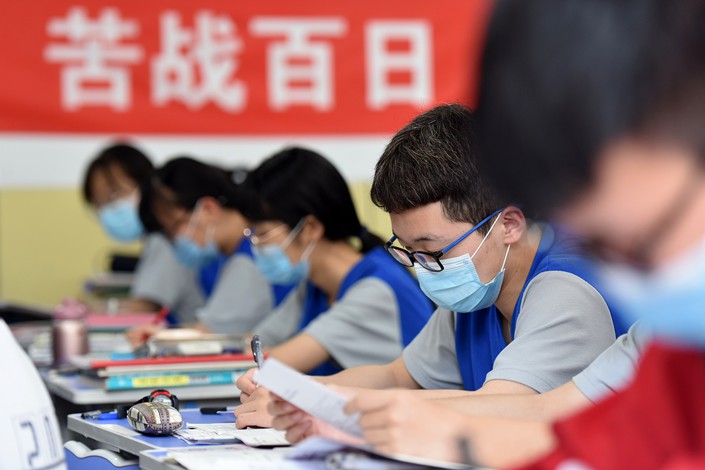 The Chinese public is in an uproar over news of a series of cases in eastern Shandong province whereby people stole the identities of college applicants to take their places at university.

In recent days, authorities in Shandong have moved rapidly to announce the results of investigations into the claims of three victims: Chen Chunxiu, Wang Lili, and Gou Jing. In each case, the sequence of events seems quite clear and the perpetrator has received a measure of punishment, giving both the victims and the public a certain amount of closure.

However, we don’t yet know the results into an ongoing probe into 242 similar cases found by the local government in Shandong.

Such impostor scandals have proliferated in China for many years, not just in Shandong. However, the number, scale and methods of the new cases have dragged public attention back to the topic.

In Chen’s case, the perpetrator fraudulently claimed her admission notice, falsified her credentials and household registration documents, all in order to steal her place at college. They then continued to use her name once they moved into the workforce. Despite the delayed justice, the educational and life opportunities denied to the victims are hard to make up.

Most of the events in these cases took place long ago, and the application of the information technology in China’s educational system makes similar incidents unlikely to happen today. However, new types of impostor crimes are sure to emerge in the future. For this reason, we must move now to fix the leaks in the system and severely punish anyone who played a role in the cases. This is not only about bringing justice to the victims, but also about keeping our education system clean.

We must not view the strength of public opinion about these cases as an overreaction. Indeed, the views expressed reflect the social psychology of a transforming China.

Education is closely bound up with the fortunes of every individual and family in the country. In keeping with centuries of cultural tradition, Chinese people have always placed great emphasis on learning. Despite its many shortcomings, the “gaokao,” China’s grueling college entrance exam, is a relatively fair system endorsed by the vast majority of citizens. Each impostor case steadily erodes that public trust.

Furthermore, social fairness and mobility are indispensable for a country’s levels of equality and dynamism. The current turmoil in certain countries and regions owes much to reduced social mobility, especially the severe obstacles on the road from poverty to wealth.

Impostor cases therefore have a huge impact on people’s psychology, with unthinkable consequences if they are not properly handled. This kind of resentment is unlikely to suddenly explode into the open, but erodes the moral underpinnings of social cohesion and destroys the desire of countless students to transform their lives through study.

For that reason, only harsh punishments for impostors will calm public anger. Regrettably, Shandong has let some direct participants in the scams get away with warnings, professional demotions or reduced pensions, measures that have drawn strident criticism.

In the last few days, some members of the National People’s Congress Standing Committee, which has been deliberating amendments to China’s criminal law, have called for strengthening legal reprisals for educational impostors and make such behavior a criminal act. Others have advocated for adding crimes like “infringing citizens’ educational rights.”

The views of legislators chime with those of the public. No matter whether this type of fraud eventually becomes an official crime, current laws, regulations, and disciplinary practices have already provided a basis for severe censure.

People have seen those in power take a tolerant approach to impostor cases. Whether punishments fit the severity of the misdeeds and can effectively deter potential cheaters will influence how the public judges the maturity of China’s rule of law. The government must deliver on its promise to make the people feel the fairness and justice in every legal case.

Strengthening rights and protections and handing down strict punishments are really two sides of the same coin. Although some of the victims of impostor fraud may now never be able to go to college, higher education institutions should try to help them if they still desire to study. This is their inalienable right.

The Shandong University of Technology initially refused Chen her request to return for study on the grounds that there was “no precedent” for her situation. Later, it said it would “work hard to help (her) realize that desire.”

This all seems too passive. Universities and colleges must reflect on whether they also hold some responsibility for the deception of impostor cases. Did any staff members take part in the ruse? The school must work proactively to correct the record and prevent future cases if so.

Currently, another pressing problem in China is that we lack open channels for relief appeals and strong social supervision mechanisms. If Chen hadn’t signed up for last year’s national exam as an adult learner and found, to her great surprise, that she had already “graduated” several years before, we may never have prized the lid off hers and other cases.

However, when Chen inquired with the relevant authorities in her county, she had to wade through wave after wave of bureaucracy. How can impostors lead fraudulent lives for years, while their victims face such difficulties when they try to uphold their rights? Where’s the justice in that?

Since some truth-seekers in certain areas face severe obstacles from government departments, we must give more space to public supervision, such as forcing the relevant authorities to create more convenient conditions for inquiring about someone’s student registration. However, the CHSI, China’s main online system for credentials checks, has made it harder for potential victims by updating its inquiries form. Amid widespread suspicion, the website’s initial response dwelt on trivial matters rather than substance, before being forced into a commitment to “optimize” its procedures. People couldn’t help asking whose side the website was on — that of the victims or the wrongdoers?

Like the coronavirus crisis, dealing with impostor cases requires information transparency. It’s worth recognizing that local governments in Shandong promptly announced the results of the three abovementioned cases, but at first, government officials offered rare responses to a groundswell of public sentiment — shows a need for improvement.

China’s main educational organs should proactively engage with the investigations and respond to the public’s concerns, not just as a means to right wrongs, but because it is an unavoidable responsibility. Insensitivity and obscurantism in some regions are disgusting.

Because China has not sufficiently deepened reform of education, it is increasingly becoming one of our shortcomings. Its development has not kept pace with the rest of society or the economy, leaving people with extreme doubts.

Education departments must take the opportunity proffered by these impostor cases to engage in systematic reflection about China’s education system and promote the good while rooting out the bad. In this way, society can have confidence in education and leave the scandal in the past. The public doesn’t want to be kept waiting any longer about why these things continue to happen.