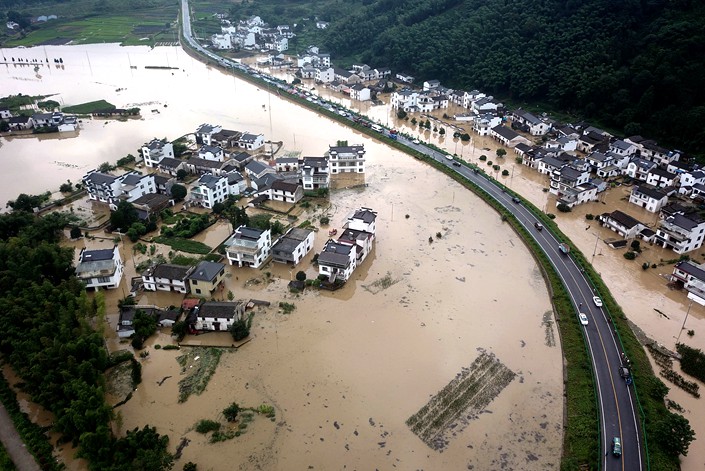 Authorities in the central city of 11 million people, which lies on the banks of the Yangtze River, issued the second-highest alert after the national weather office warned of sustained heavy rain.

China is experiencing one of its wettest flood seasons in a generation. Deluges have occurred across a swath of the country from Yunnan province in the far southwest to Zhejiang province in the east, killing dozens, displacing millions, and causing billions of dollars of damages.

Environmental experts have warned the scale and intensity of the inundations carry the traits of climate change.

Between 400 millimeters (15.7 inches) and 492 millimeters of rain fell in parts of Wuhan and the nearby city of Jingzhou on Sunday after weather officials warned of “extremely large” downpours in urban areas across the province of Hubei. Cloudbursts in nearby Jiayu county broke the rainfall record for July.

Further rain warnings were in place along the Yangtze’s 6,300-kilometer route, including parts of southwestern Guizhou province and the eastern Jiangxi and Jiangsu provinces.

The same day, emergency response officials in Wuhan raised the flood threat to level three, the second-lowest ranking in a four-tier system. They raised it to level two less than 90 minutes later amid deepening fears of inundation and drainage difficulties.

Standing water gathered in 13 areas of the mostly rural Jiangxia district, with seven of them too sodden for vehicles to pass through, Wuhan’s flood and drought prevention command office said.

The inundations dealt a further blow to the beleaguered city, where more than 3,800 people have died from the coronavirus so far this year, according to official figures.

All monitoring stations along the Hubei stretch of the Yangtze had recorded water rises by the end of Sunday due to persistent local rainfall and swollen upstream rivers, according to local media reports.

By 7 a.m. Monday, water levels at one station were 40 millimeters higher than the official warning line, the first time that has happened in Hubei this summer.

A spokesperson for China’s water resources ministry said at a Sunday press conference that further water rises were expected in a range of areas along Asia’s longest river and warned that flood defenses were operating at the upper limit of their capacity.

In many areas, there was a risk that flooding could “occur at any time,” the official said.

Caixin has learned from the Ministry of Emergency Management that further rainstorms were expected in parts of southern China through Wednesday and the threat of deluges remained high.

Wet-weather fronts known as the “plum rains” commonly cause floods in China in early summer, but rarely on such a devastating scale.

Parts of the southwestern megacity of Chongqing recorded their worst floods in more than two decades last month, with water levels in some areas rising more than 5 meters (16.4 feet) and submerging homes and businesses.

The country maintained severe weather warnings across southern and eastern regions on almost every day in June, a rare occurrence that experts attributed to unusual rainfall patterns made more likely by climate change.