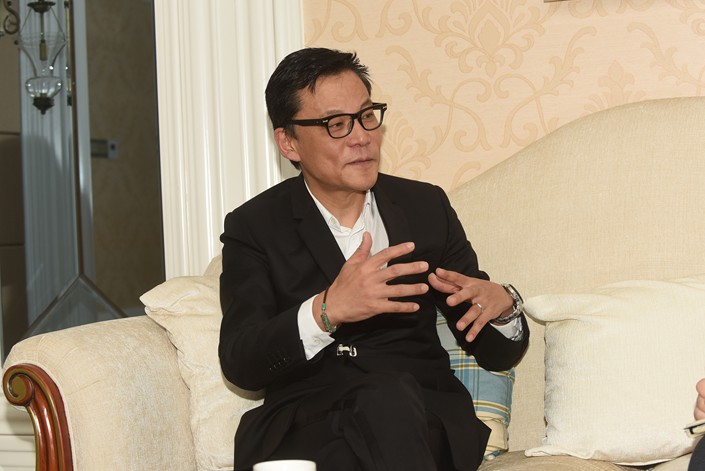 It was once feted as the Amazon of China. But these days faded e-commerce specialist Dangdang Inc. looks more like a bad season from the popular U.S. series “Divorce Court.”

In the latest episode of the ongoing fight for control of the company, co-founder Li Guoqing was detained by police in Beijing’s Chaoyang district for questioning on Tuesday. His estranged and possibly former wife Peggy Yu — no one is sure if their divorce has been completed — was spotted by Caixin at the station later that day with several other Dangdang employees presenting various documents and giving their account of events.

According to a report by the Chaoyang police office, a 55-year-old suspect surnamed Li and accomplices forced their way into an office in north Beijing on Tuesday morning around 7 a.m. They then “restricted the personal freedom of others and disturbed the company’s regular work environment.”

The company, where Yu currently calls the shots, put out its own statement saying that Li resorted to force and brought a group of more than 20 people to Dangdang’s office early Tuesday morning. The group forced open several locked cabinets and took away various company materials, Dangdang said, providing photos of safes that had been broken into.

Li denied the account on the popular WeChat messaging platform, and said there hadn’t been any physical conflict. He added the matter was a dispute between the company’s two big shareholders.

The conflict dates back to early 2019 when the couple first became estranged after more than two decades of marriage. After frequent sniping over social media, much of it coming from Li’s personal account on China’s Twitter-like Weibo, the conflict culminated on April 26 when Li and some accomplices went into Dangdang’s office and took the company seal.

Such seals, also called chops, are extremely important in China, as whoever controls them holds the power to officially sign off on any company documents. Likewise, many official transactions are impossible without the seal, such as changes to the company’s registration documents.

Dangdang said that Li had entered that day with two former employees and four people dressed in black to take the seal, pushing and shoving people in the process, and that Dangdang had filed a complaint on the matter. Li then announced that he had called a shareholder meeting on April 24 where he had been elected chairman and CEO. He said his wife was no longer an executive director, and she no longer had any official duties at the company.

Li filed divorce proceedings against Yu last October, though no confirmation of the couple’s divorce has yet emerged. Early last year, Yu told Caixin she had signed an agreement with Li granting her and her family more than 70% of Dangdang’s shares — though Li has denied the claim.

The drama has overtaken the company at the center of the storm, Dangdang, which was one of China’s first e-commerce players and was likened to Amazon in its early days for its initial focus as a bookseller. Dangdang would go on to list on the New York Stock Exchange in 2010, but would delist six years later after being overtaken by more aggressive e-commerce names like Alibaba and JD.com.

Dangdang thought it found a savior when a unit of the debt-ridden conglomerate HNA Group agreed to buy the company two years ago in a deal that valued it at 7.5 billion yuan ($1.1 billion). But that deal collapsed several months later as HNA, struggling with its own debt issues, failed to sign a final agreement for the purchase.