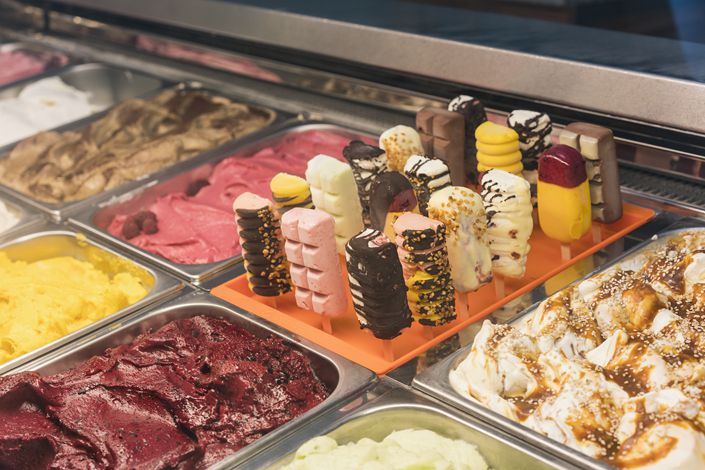 Perfect Day is a pioneer in the lactose-free, vegan “dairy” market, and last year launched a range of such ice creams made from milk created by microbes in tanks, without the use of farm animals.

Horizon’s renewed interest in the company has sparked speculation about the U.S. firm’s designs on the world’s biggest ice cream market, alongside questions over whether its use of genetically modified organisms (GMOs) in the manufacturing process will bring Chinese regulatory scrutiny. Caixin has learned the company has been handing out samples of its flagship synthetic ice cream in Hong Kong to generate buzz.

Perfect Day is a pioneer in the lactose-free, vegan “dairy” market, and last year launched a range of such ice creams made from milk created by microbes in tanks, without the use of farm animals.

Founded in 2014, it has expanded its production and footprint by pairing up with San Francisco-based Smitten Ice Cream to commercialize a line of gluten-free, vegan ice creams.

Perfect Day’s ice cream has proved popular in the U.S. where it is priced at around $20 a pint, about twice the price of Häagen-Dazs’ dairy ice cream, and an initial tranche apparently sold out within hours of hitting the market this time last year.

The company makes milk using microbes that have been genetically engineered to ferment sugar and produce the main proteins found in cow’s milk: whey and casein. These can be used to make facsimiles of traditionally dairy-based foods like ice cream, butter and cheese.

But it’s unclear whether Perfect Day’s manufacturing techniques will pass muster with Chinese regulators, which have particularly strict standards for the import and labeling of genetically modified foods.

Perfect Day’s website says its products do not contain GMOs because the microbes are filtered out of the milk before sale, but that “genetic modification is part of our process.”

The company is among an array of synthetic food-makers eyeing the huge yet guarded China market, including fake-meat makers Beyond Meat and Impossible Foods. The latter is also backed by Li Ka-shing, and is in talks with several Chinese companies for potential partnerships.

Impossible Foods founder and CEO Patrick Brown previously told Caixin the company would need to clear regulatory hurdles to enter the Chinese market because of its cautious attitude toward GMO crops.

Genetically modified foods have received a generally cold reception from Chinese consumers, with a 2019 study finding the proportion who considered them unsafe climbed from 13% to 45% between 2002 and 2012.

Conservative attitudes toward artificial meat also persist, with one poll estimating less than a third of people in China were interested in trying it, and more than half were not.

Chinese consumers bought 1.23 million tons of ice cream in 2018, making the largely lactose-intolerant country the world’s biggest market for the sugary treat. The industry was worth around about 124.3 billion yuan ($17.8 billion) that year, according to analysts at Daxue Consulting.