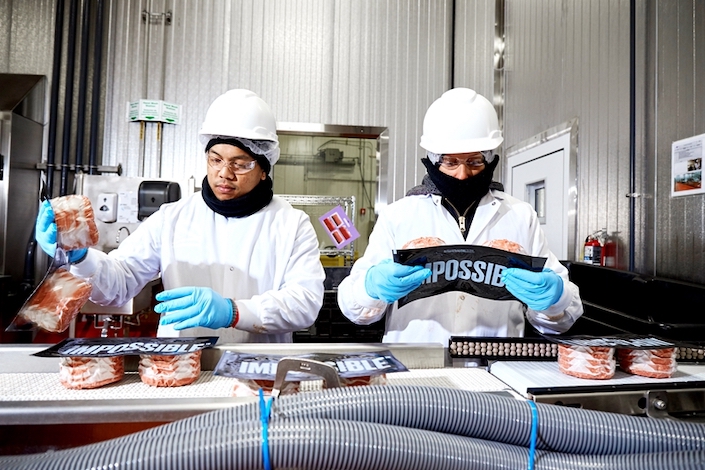 Impossible Foods is among a handful of global startups dedicated to developing meat alternatives. Photo: VCG

U.S. plant-based meat producer Impossible Foods Inc. is seeking to bring its alternative meat product to dining tables in China, but regulatory hurdles will pose the biggest uncertainty of its journey.

Impossible Foods, which produces synthetic meat products using soy and other plants, is in talks with several China companies for a potential partnership to tap the world’s largest meat-consuming market, according to company founder and CEO Patrick Brown. The ambitious company has the backing of heavy hitters including Bill Gates and Li Ka-shing.

“Asia in general, and China in particular, are essential markets for us,” Brown said Wednesday at the Fortune Global Sustainability Forum in Yunnan. The company is counting on the China market, which accounts for 25% of global meat consumption, as a key driver of its vision to completely replace animal meats with plant-based meats by 2035.

Impossible Foods plans to set up China production facilities to supply the country and bring the whole business chain to China, Brown said.

Impossible Foods is among a handful of global upstarts dedicated to developing meat alternatives using biological or genetic technologies amid growing concerns about the sustainability of meat production and the environmental impact of the livestock industry.

Impossible Foods is in early talks with government agencies in the southwest Yunnan province for a potential partnership, in hopes to open its first China factory in the province, Caixin learned.

But Impossible Foods will need to clear regulatory hurdles to enter the Chinese market because of the country’s cautious attitude toward genetically modified (GMO) crops, Brown said. The company uses GMO soy to create a key substance that gives its faux meat products a meaty taste.

China does not permit planting of GMO soybeans and requires permits for GMO crop imports. Brown said he expects to get help from Chinese partners to deal with the regulatory hurdles.

Brown is upbeat about Impossible Foods’ business outlook in China as it will provide an alternative meat supply option for the country to meet growing demand while reducing reliance on imported meat and saving land and resources from the livestock industry.

China’s total meat consumption in 2018 exceeded the combined amount of the United States and the European Union, with per capita consumption of 60 kilograms, according to Wu Qi, a professor at the Chinese University of Hong Kong.

For most Chinese families, pork is a staple food accounting for 60% of meat consumption. The country is the world’s largest hog producer and pork consumer.

This year’s outbreak of African swine fever rang the alarm for the country that the resource-gobbling production of animal meats may not be able to keep up. The epidemic forced the culling of millions of hogs in China, slashing pork supplies. A 20% decline in pork production this year will result in a supply shortfall of more than 11 million tons that could be filled by other meats and meat alternatives, according to Guosheng Securities.

But pork supply is still under pressure. According to the Ministry of Commerce, the average pork price in 22 major Chinese provinces and cities surged 31.4% during August. That forced Nanning, the capital city of South China’s Guangxi Zhuang autonomous region, to make a rare government-led price intervention by offering subsidies to meat vendors to cut pork prices.

Established in 2011 in California, Impossible Foods is backed by prominent investors including Microsoft co-founder Gates, Hong Kong tycoon Li and Google Ventures. The company said it supplies plant-based meat alternatives to more than 7,000 restaurants in countries and regions including the U.S., Singapore, Hong Kong and Macao.

Brown projected that in two to three years, the alternative meat industry will be able to cut costs to the equivalent of animal meat production.

British investment bank Barclays predicted in May that the global meat market will reach $1.4 trillion in 10 years with the share of alternative meats rising to 10% from less than 1% now.