In Depth: The Meaty Taste of Meatless Food of the Future 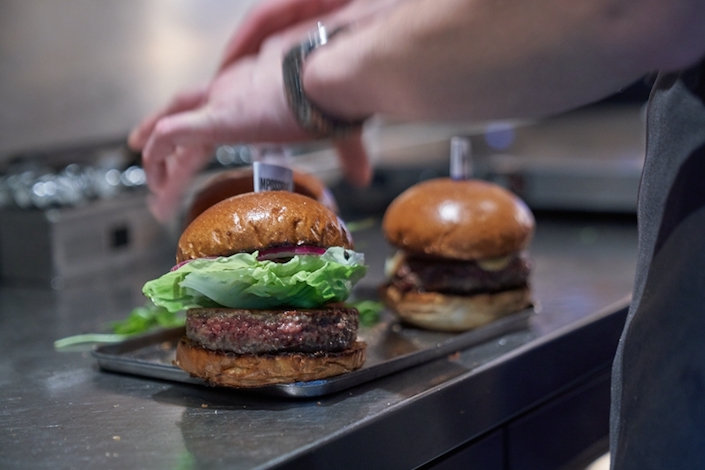 Burgers with plant-based patties are winning customers in the U.S. Photo: VCG

It looks and smells just like a pink and juicy beef burger when patties are grilled in the kitchen of Impossible Foods Inc. in Redwood City, California. Except that there is no beef.

“I’ve developed over 100 recipes with faux meat,” said Chef Lee in the lab-style kitchen of the California-based startup, which creates plant-based substitutes for meat and dairy products.

The “meat juice” that bleeds from the plant-based patties is heme, an iron-rich molecule extracted from the roots of soybean plants. The substance gives the faux meat its meaty taste, said Nicole Quihuis, Lee’s assistant. With five ingredients in beakers, including blood-like heme, potato protein and coconut oil, Quihuis swiftly made a hamburger patty by mixing and pressing.

It is more like a chemistry experiment than cooking. And with exploding global population creating more and more mouths to feed, it may be the future of food in America, China and the rest of the world.

China’s outbreak of African swine fever this year drives home the point that the world’s resource-gobbling production of animal meats may not be able to keep up. The epidemic forced the culling of millions of hogs in China, slashing pork supplies. A 20% decline in pork production this year will result in a supply shortfall of more than 11 million tons that could be filled by other meats and meat alternatives, according to Guosheng Securities.

Certainly, the world’s most populous country can’t be ignored as a market for fledgling meat-alternative developers. China is the world’s largest hog producer and pork consumer.

In 2018, the country’s total meat consumption exceeded the combined amount of the United States and the European Union, with per capita consumption of 60 kilograms, according to Wu Qi, a professor at the Chinese University of Hong Kong. Finding alternatives for meat will be crucial for the country to ensure public health and sustainable growth, Wu said.

“It is the only path for China and the world,” he said. “There is no other choice.”

But for industry pioneers such as Impossible Foods, putting lab-raised meat on people’s daily plates is still a long-term challenge, requiring efforts to expand production, reduce costs and address consumers’ safety concerns while changing long-established dietary habits. Meanwhile, the emerging business poses challenges for global regulators, who have barely any experience with meat products that aren’t from slaughterhouses.

Founded by Stanford biochemistry professor Patrick O. Brown in 2011, Impossible Foods is among a handful of global startups dedicated to developing meat alternatives with biological or genetic technologies.

The business is emerging amid growing concerns about the sustainability of meat production and the environmental costs of the livestock industry. The sector is one of the biggest sources of global greenhouse gas emissions, representing 14.5% of total emissions ― even more than the transport industry ― according to data from the United Nations’ Food and Agriculture Organization.

More than 45% of the land surface of Earth is used as land for grazing or growing feed crops for livestock, which consumes more than 40% of crop production worldwide. With global population expected to expand by a third to 10 billion by 2050, meat consumption is projected to rise 73% from the 2011 level, according to the FAO.

Startup companies are offering solutions. While those like Impossible Foods study plants for substitutes, others like Berkeley-based Memphis Meats and San Francisco’s JUST Inc. are testing how to grow meat or dairy products from cells in laboratories. In 2016, Memphis Meats produced meatballs by culturing beef cells in a nutrient broth.

Either way, the new business is seen as a promising game changer to the food industry and has won the backing of high-profile investors such as Microsoft co-founder Bill Gates, Virgin founder Richard Branson and Hong Kong tycoon Li Ka-shing, who have poured millions of dollars into players in the sector.

Since Beyond Meat, a producer of plant-based meat substitutes, debuted on Nasdaq in May, its share price surged more than 600% from its offering price as of July 19.

Investors in China have also been enticed by new food concepts, fueling waves of stock market hype for companies even remotely related to the idea, even though analysts said no company in the Chinese mainland has truly engaged in the business. At the same time, Hong Kong is emerging as a hotbed for meat-alternative developers

Food of the future

The plant-based beef patties developed by Impossible Foods and the cultured meatballs from Memphis Meats are based on the theory that by using biological technology and programming organisms, people can produce all kinds of food without slaughtering animals. These methods are seen as more efficient, environmentally friendlier and healthier for the future of food.

Plant-based meat uses vegetable protein to replace animal protein while employing additives like heme to mimic the taste and texture of real meat. Impossible Foods uses soy protein and extracts heme from soybean plants while Beyond Meat is turning to pea protein and beet extract.

The nutrition of the products is similar to that of real meat in terms of protein content, although the composition of amino acids is different, according to Liu Yuanshuai, a biological researcher at Hong Kong University of Science and Technology.

Yeung said he plans to expand his business to the mainland in the second half this year, with potential plans to set up production facilities there.

Despite higher prices, plant-based meat has won followers among consumers. Chef Leo at Beef & Liberty, a high-end burger restaurant in Hong Kong, said around 30% of his customers choose plant-based meat products regardless of the price.

In theory, a 100-day culturing of 1 milligram of stem cells from animal muscle could yield 1 million tons of cell-based meat, which would have almost the same texture as meat raised on farms, according to Huang Shiqiang, a stem cell researcher at the Chinese Academy of Sciences.

But the theory is far from being developed into reality. Memphis Meats in 2017 successfully cultured chicken meat in its lab. The cost to produce 1 pound stands at $2,400 now, down from $18,000 at the beginning. The company predicted that commercial production can start 2021. San Francisco’s JUST made a similar projection.

Singapore-based Shiok Meats is trying to develop seafood from cultured cells. Company co-founder and CEO Sandhya Sriram said the cost to produce 1 kilogram of shrimp in its lab is currently S$5,000 ($3,680). Sriram said he expects to reduce production costs as low as S$50 in a year, but the product will be commercially feasible only when the cost is cut to S$1 to S$5 per kilogram.

Cost control and efficiency are the major obstacles facing researchers of faux meat substitutes, said Impossible Foods founder Brown, who said he is confident that the cost can be cut to a reasonable level within five years.

In addition to venture capitalists, traditional food industry giants are racing to jump on the bandwagon of the new business.

In April, Nestle introduced a plant-based Incredible Burger in several European countries, and said it plans to tap the American market later this year. U.S. food giant Tyson Foods Inc. has invested in several startups and has geared up development of meat substitutes of its own.

Research firm MarketsandMarkets estimated that by 2023, the global market value of meat substitutes production will reach $6.43 billion, growing at an annual rate of 6.8% since 2018. The fastest growth will be in the Asia-Pacific region where people have meat-heavy appetites, the company said.

Impossible Foods has set its eyes on the Asia-Pacific region for the next step in its expansion, with a focus on China, Brown said.

“Entering the China market is one of our top tasks this year,” he said. Brown said Impossible Foods is considering the development of pork-like products for China.

But whether faux meat products can satisfy the palates of Chinese people remains a question. China has hundreds of years of producing imitation meat in the form of soy products, but most people still won’t see it as a replacement for real meat, analysts said.

“We are not optimistic about the outlook of faux meat products in China as people’s tastes are picky,” said a Chinese private equity investor. Unlike Western people who consume more ground meat for burgers and other dishes, Chinese cuisines often use whole piece of meat, which are more difficult to imitate with substitutes, the investor said.

For most Chinese families, pork is a staple food accounting for 60% of their total meat consumption.

“Chinese people are obsessed with the texture,” raising the bar for substitutes, said Wu of the Chinese University of Hong Kong.

In response to questions from Caixin, Nestle said it is studying plans to launch products specifically designed for Chinese consumers and reflecting the country’s unique dining culture.

Chinese food giants have yet to take concrete steps to tap the new market. Leading dairy maker China Mengniu Dairy Co. said it has been closely watching the development of protein substitutes, but related research is still in very early stage.

Global regulators have yet to set a clear supervisory framework for the new type of food.

In the U.S., plant-based meats produced by Beyond Meat and Impossible Foods are considered meat alternatives and are overseen by the Food and Drug Administration (FDA). However, there is no established federal law governing the safety supervision of meat alternatives.

Chinese regulators largely treat plant-based meat as soy products. In Hong Kong, where many meat substitute startups have begun marketing products, no specific rules on the inspection and labeling of plant-based meat have been set. The city’s Food and Environmental Hygiene Department told Caixin that no cultured meat has been sold in the city.

Mainland regulators in 2013 issued rules regarding “new-source food,” which includes food made by untraditional materials such as microorganisms and ingredients extracted from animals and plants. However, the rules didn’t clearly address how lab-raised food, especially cultured meat, should be regulated.