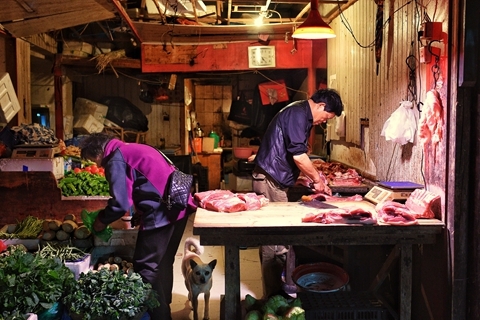 Xin Guochang, an executive officer at the Ministry of Agriculture and Rural Affairs, made the remarks Thursday at a press conference in Beijing. There is currently no vaccine or cure for the epidemic, which is deadly to most pigs but not to humans, and which has already spread to most provinces and regions across the country.

However, the government’s estimate of the decline in pork production is seen as too conservative by many industry insiders and analysts. Li Changlong, head of the China Meat Association, predicts pork production will drop 15% to 20% this year. Others expect a drop of as much as 40%, he said.

Since swine fever was first reported in China last August, the country has recorded 143 separate outbreaks and culled over 1 million hogs, China’s vice minister for agriculture and rural affairs said last week. The domestic supply crunch has prompted the country to boost imports and rely on other meats as substitutes.

China’s pork imports are set to reach a record high of as much as 3.3 million tons this year, said Li.

Authorities remain confident about the outlook for the country’s pork market this year, with the substitution of meat products a solution to close the gap between pork supply and demand, according to agriculture official Xin.

The nation’s total meat production—mostly pork, chicken and beef—increased 16.1% in the first five months this year compared to a year earlier and is targeted to reach as much as 3.2 million tons by the end of this year, said Xin.

Nevertheless, the effects of swine fever are expected to push up food inflation in coming month, as hog prices have surged compared last year.

Pork prices last year were relatively low, with the price this year is only 5% higher than the average price in the past three years, Xin said.