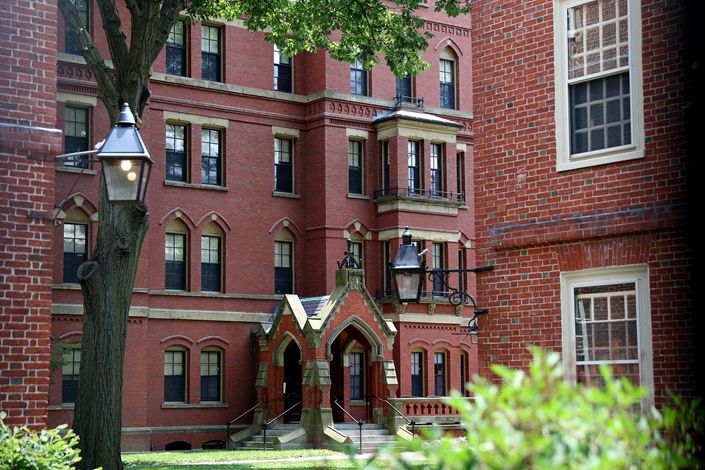 Harvard University in the U.S. on July 8.

Until a few weeks ago, Zhao Litian was envisioning a fall semester of science experiments, conversational Russian lessons and long runs through the wooded gorges of upstate New York.

Due to the coronavirus pandemic and a tangle of global travel restrictions, the China-born Cornell University sophomore now expects to complete the term online from a dorm room in Beijing.

Nineteen-year-old Zhao is one of hundreds of thousands of U.S-based Chinese students facing disrupted education as American schools reduce in-person teaching to curb the coronavirus’ spread. Flight suspensions and new visa restrictions are adding to the uncertainty and forcing Chinese officials to mull awkward strategies for absorbing stranded students into the domestic education system.

The chaos is rattling an American higher education sector highly dependent on international students, particularly those from China. The Asian nation sent nearly 370,000 students to the U.S. in the 2018-19 academic year, accounting for one-third of all overseas students in America, according to a report from the Institute of International Education, a U.S. nonprofit.

Chinese students contributed $14.9 billion to the U.S. economy in 2018, again about one-third of the figure for all international students, according to the Department of Commerce.

Now, facing empty campuses and dwindling revenue streams, American universities are trying to cushion the pandemic’s impact and convince international students they can still enjoy a top-class education despite being marooned in faraway lands.

But with little to offer beyond months of online classes or limited access to overseas partner institutions, it’s turning out to be a tough sell.

“Tens of thousands” of Chinese students may have fled home as America’s coronavirus outbreak took hold, according to John van Fleet, chair of the education committee at the American Chamber of Commerce in Shanghai.

They face “unprecedented challenges” to continue their studies through the Covid-19 crisis, he added.

Zhao has already experienced the inconvenience of attending college from the other side of the world. After returning to Beijing in May, he began waking at 2 a.m. to participate in his remaining first-year classes taught from New York on the online video platform Zoom. Chinese returnees also described problems accessing course materials and completing online assignments and tests.

Some said their schools’ pivot to online classes forced teachers to abandon practical activities in favor of more theoretical learning, diminishing the quality of certain courses. Zhao, for instance, bemoaned the lack of access to chemistry labs and Russian language partners.

In some cases, the measures had bizarre consequences. Shen Yiyang, a political science major at the University of Pittsburgh, said he chose to ride out the pandemic in the U.S. partly because Chinese internet regulations restrict access to many materials in his specialist subject, Marxist thought.

The severe U.S. outbreak, prolonged flight disruptions and probable visa processing backlogs have many Chinese international students gearing up for an extended stint back home.

“We can’t get back to normal study life this fall, but I hope we can do so next spring,” said Kevin Sheng, another Cornell sophomore.

Despite the efforts of American colleges to set up temporary study arrangements for stranded Chinese students, they can only offer a shadow of university life.

Cornell, which had nearly 2,400 mainland Chinese students in the 2018-19 school year, has announced one of the most comprehensive plans so far. The university’s “Study Away” program will allow some Chinese mainland students to live and study at one of seven local institutions during the fall semester, attending a mixture of online and in-person classes.

Zhao and Sheng, who have both applied to spend the term at universities in Beijing, praised the scheme for restoring a measure of community spirit and offering the novel experience of attending top universities in their homeland.

But they also had misgivings. The role of Cornell and the evaluation criteria used by Chinese universities during the Study Away application process were vague, and the fact partner institutions are clustered in China’s north and east sparked concerns that students in other parts of the country could be overlooked, they said.

It was also unclear whether Chinese students would be obliged to attend online classes at unsociable hours, potentially disrupting their roommates’ sleep, they added.

Contacted by Caixin, Cornell declined to comment on the Study Away program but referred to recent online conferences at which staff at its Office for Global Learning told students that partner institutions would consider applicants based on hosting capacity and academic ability, and that “variability” existed regarding which students could participate in which Chinese programs.

Interview requests to all of Cornell’s partner institutions in China went unanswered.

Although Study Away is “undoubtedly a better option than online-only [study],” students will miss “the international community aspect … and some of the uniquely American cultural experiences that stem from being educated in the U.S.,” said van Fleet.

Several American colleges, including Harvard University, have established schemes for international students to transfer credits from accredited schools in their countries of residence, while others will conduct some or all classes online.

Controversially, many schools have ruled out tuition fee reductions despite being unable to offer normal academic and extracurricular experiences.

Pittsburgh, for example, said it will offer Chinese students the chance to study at a partner institution in their home country. But for those who can’t attend in person, a mostly-online fall semester feels like “the most expensive streaming service in the world,” Shen said.

It is a “virtual certainty” that some Chinese international students will be unable or unwilling to complete their planned studies in the United States, according to van Fleet.

The looming dropouts have prompted Chinese officials to consider incorporating stranded students into the domestic higher education system, but that’s not as simple as it sounds.

Chinese universities typically enroll undergraduates according to their results on the “gaokao,” the country’s notoriously grueling college entrance exam. But many students targeting overseas schools opt out of the gaokao curriculum to take American standardized tests like the SAT.

Even if Chinese schools bent the rules to accommodate returnees, their different knowledge bases and study cultures would make it harder for them to succeed, said Zhang Duanhong, an assistant professor in the Institute for Higher Education at Shanghai’s Tongji University.

“Overseas universities generally place extremely high emphasis on seminars, for which students spend a lot of time studying, discussing and debating subjects in small groups so as to reflect on them more deeply,” said Zhang. “In China, courses more commonly take the form of lectures driven predominantly by the instructor.”

Amid concerns about students’ academic credentials and university capacity, Ni Minjing, the deputy head of Shanghai’s education commission, proposed a compromise at China’s key annual political meetings in May: expanding enrollment at China’s hundreds of professional and vocational colleges, and encouraging returnee international students to seek study there.

But students online balked at Ni’s suggestion that they should trade first-rate overseas schooling for a domestic system held in far lower esteem.

Neither the Shanghai education commission nor China’s Ministry of Education responded to Caixin’s requests for comment.

Beijing Normal University education professor Hong Chengwen told Caixin in an interview that students should be willing to “transform their thinking” to increase their study options outside the U.S.

“If they’re patient, they could even take a crash course in German, French or Spanish and attend college [in those countries],” Hong added. “It’ll bring costs in terms of time, but it won’t have a huge effect on their life successes.”

But students told Caixin they weren’t about to give up the cachet of the American college degrees they’d been working toward for years.

“After all, you apply to American universities for a reason, said Shen, the political science major, citing their world-class teaching facilities, vibrant communities and academic freedom.