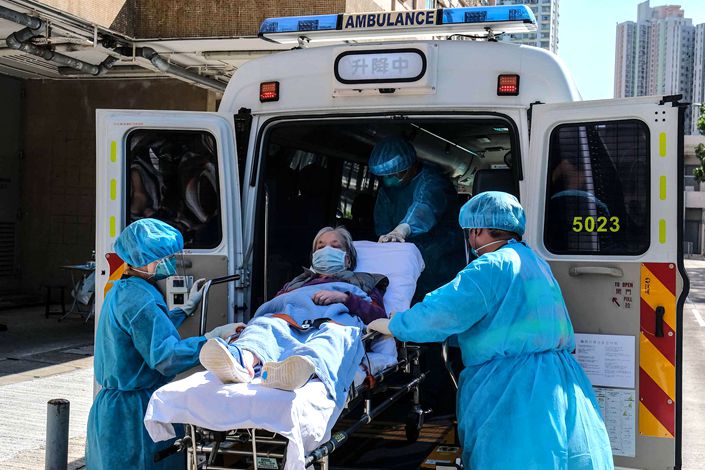 People were diagnosed with Covid-19 at a Hong Kong nursing home on July 24.

Starting Wednesday, people in the semiautonomous territory will be banned from congregating in groups of more than two and forbidden from eating in restaurants for a period of one week, Hong Kong’s Chief Secretary for Administration Cheung Kin-chung said at a press conference.

Existing mask-wearing requirements will be extended to include all outdoor areas and public sports facilities, and swimming pools will also close for one week, according to the announcement.

Cheung also said Sunday in a blog post (link in Chinese) on his department’s website that Hong Kong will launch a free testing initiative for more than 400,000 people deemed at high risk of catching the coronavirus, including care home residents and staff, restaurant workers, taxi drivers and residential compound managers.

The former British colony is grappling with a third wave of infections that has dwarfed its previous outbreaks. Monday’s case rise is more than double the highest increase the territory recorded during its initial Covid-19 flare-up in March.

Disease experts have said the new outbreak may be the result of testing loopholes and quarantine exemptions for returned air and ship crews, who may then have spread the virus to taxi drivers.

The new outbreak shows few signs of easing despite a tightening of disease control measures earlier this month that shuttered bars, gyms, nightclubs and some restaurants, made face masks mandatory on public transportation and in indoor public areas, and required nonessential civil servants to work from home.

The spiraling caseloads are putting pressure on one of Asia’s best-regarded health care systems. Isolation wards at Hong Kong’s public hospitals were operating at about 80% capacity over the weekend, according to the city’s Hospital Authority.

It added that 1,207 negative pressure berths, or 77.1% of the city’s total, were in use as of midday Sunday. The berths are housed in specially designed wards that help to prevent room-to-room virus transmission.

The Chinese mainland’s official representative in Hong Kong said Sunday it was ready to offer Hong Kong “all necessary support” to help the territory fight the virus.

A spokesperson for the Hong Kong liaison office said (link in Chinese) Beijing had sent face masks and other medical equipment to alleviate the outbreak, according to an online statement.

They added that certain claims among some Hong Kong residents regarding Beijing-orchestrated medical relief were “groundless” and “political scheming.”

“A minority of people in Hong Kong does not care about the safety of all citizens and throw out all sorts of shocking and shameful theories with no basis to them,” the spokesperson said.