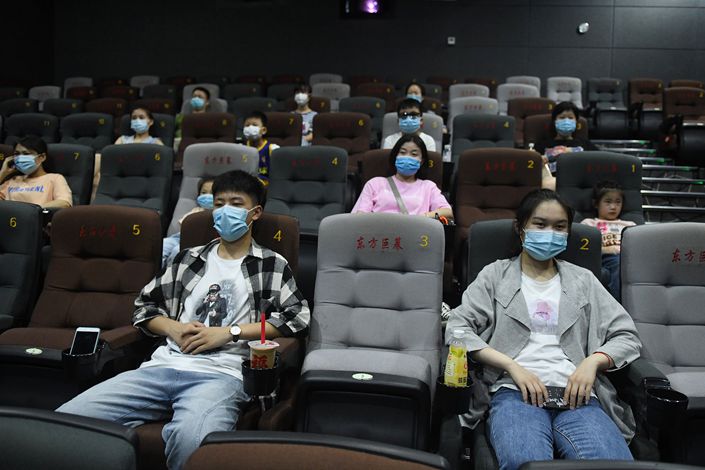 People watch a movie at a reopened cinema in Fuyang, Anhui province, on July 27.

China’s box office brought in modest revenue in its first week after theaters reopened from a six-month pandemic-induced hiatus, as observers said times will remain tough due to a shortage of new films combined with the financial burden of the prolonged closure.

Total revenues for the world’s No. 2 box office reached a modest 109 million yuan ($15.6 million) in the first week after theaters were officially allowed to reopen starting July 20, according to industry tracking site Maoyan. That was down 92.2% from a year ago, and was roughly equal to a single day’s box office take for the equivalent period last year.

But the daily figure has been gradually growing as more theaters reopen. The single-day total hit 35.2 million yuan by July 26, or roughly 10 times the amount on the first reopening day. Some 5,103 theaters have now reopened, compared with just 1,271 on the first day of resumed screenings, according to Maoyan. As of Sunday, about 45% of theaters nationwide had resumed operations.

The traditionally strong weekend period was the big driver during the reopening week. Friday box office revenue reached 20 million yuan, triple the Thursday total, helped in part by the premier of two new films that ultimately accounted for more than half of the entire week’s total. One of those was the foreign film “Dolittle,” the family film starring Robert Downey Jr.

Apart from luring virus-weary patrons back into theaters, one of the industry’s biggest challenges will be filling a movie pipeline that basically went into pause mode back when the pandemic first began to peak in late January.

Production virtually ground to a halt due to the pandemic, said Yu Dong of Bona Film Group Ltd. at the opening of the 23rd Shanghai International Film Festival on Saturday. He added that without any new movies in the production pipeline, Bona will run out of films to show by March of next year.

Offerings were relatively limited in the first week of reopenings, and will continue to be modest this week when 13 films are set to be screening. To help fill the gap created by lack of new product, China Film Group and Huaxia Distribution, two of the nation’s leading film distributors, plan to re-release 30 to 50 classic films as part of an effort to reboot the market, said Fu Ruoqing, who holds high level titles at both companies.

“I am confident that the China film market will recover gradually,” he said in a keynote speech at the Shanghai film festival. “As the second-largest film market in the world, China will strengthen international cooperation, promoting the development of the global film industry.”

But six months of closure has already put immense pressure on both filmmakers and theater operators, who have made little or no money during that time despite having to continue to pay expenses like rent for office space and theaters. That has led many to predict an upcoming period of consolidation, especially for cinema operators who were already feeling pressure before the pandemic due to a recent period of overbuilding.

“China is the largest market to reopen, and we view the early box office results as encouraging,” said Rance Pow, president of industry consultancy Artisan Gateway, speaking at the Shanghai event. “That being said, the cinema industry will likely face challenges and hardship in the short and intermediate terms. The major chains will likely survive and become vehicles of industry consolidation … perhaps with significant financial restructurings after the prolonged period of business closure.”