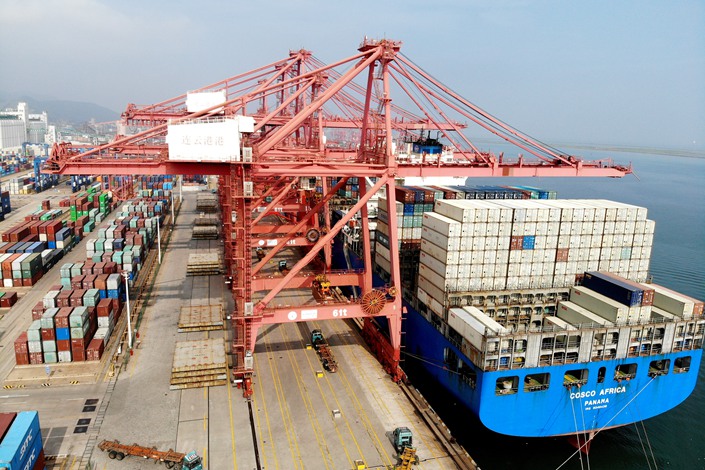 China’s foreign trade posted a mixed performance in July, with exports growing at the highest rate in seven months and imports returning to decline, according to official figures.

Goods exports grew 7.2% year-on-year to $237.6 billion last month, up from 0.5% growth in June and the fastest expansion since December, according to data (link in Chinese) from the General Administration of Customs released on Friday. The reading beat the median forecast for a 1% rise in a Caixin survey (link in Chinese) of economists.

Some analysts said the jump in exports was driven by shipments of products related to the Covid-19 pandemic, such as medical supplies and products for working from home. In the January-July period, exports of medical devices jumped 47.3% (link in Chinese) year-on-year by value, up from a 41.4% rise (link in Chinese) in the first half-year.

“China further strengthened its role as the world’s factory since March, when manufacturing in other major industrial economies was severely hit by the pandemic,” economists at Nomura International (Hong Kong) Ltd. wrote in a note, adding that unprecedented fiscal stimulus and money printing in other major economies had bolstered their purchasing power.

“We think Beijing has the incentive to fulfill its commitments on the Phase One trade deal with the US,” the Nomura economists said. But they also warned of significant uncertainties around the trade deal amid the worsening China-U.S. relationship.

China’s total imports fell 1.4% year-on-year to $175.3 billion in July, a reversal from a 2.7% rise the previous month. The reading was lower than the Caixin survey’s median forecast of 0.8% growth. But falling commodity prices implied that import volumes still expanded, Louis Kuijs, head of Asia economics at research firm Oxford Economics Ltd., wrote in a note.

In July, China’s trade surplus widened to $62.3 billion from $46.4 billion the previous month.

Some economists warned about headwinds facing exports as the fallout of the pandemic continues to affect global demand, but estimated that the domestic economic recovery would drive imports. “While exports are likely to level off in the coming months, a further ramp up in stimulus should continue to support the recovery in imports,” economists at research firm Capital Economics Ltd. said in a note.