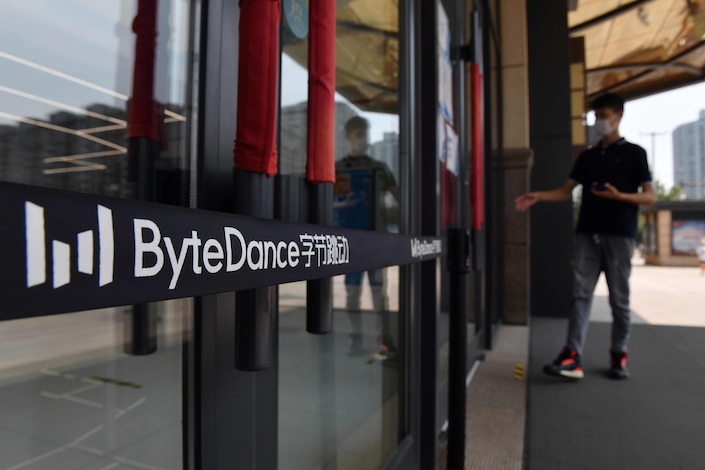 Analysts and bankers have estimated the U.S. operations at $20 billion to $50 billion.

Mounting pressure from the White House is undercutting the value of TikTok, the viral video service owned by China’s ByteDance Ltd., in its asset sale talks with Microsoft Corp. as President Donald Trump orders an imminent ban on the company, Caixin learned.

A person close to the matter said ByteDance is in an increasingly unfavorable negotiating position in discussions to sell part of TikTok’s operations to Microsoft and ward off a U.S. ban.

The price tag of TikTok’s businesses in the U.S., Australia, Canada and New Zealand has been beaten down to $10 billion, the person said, half or less than previous market estimates.

A ByteDance investor told Caixin earlier that investors valued TikTok’s entire global business at about $100 billion. Analysts and bankers have estimated the U.S. operations, TikTok’s second-largest overseas market after India, at $20 billion to $50 billion, according to Bloomberg data.

Read more
Cover Story: Will TikTok Be the Next Huawei?

With 70 million monthly active users in the U.S., TikTok has become a fresh target in the Trump administration’s confrontation with China, following a sustained assault on telecom giant Huawei Technologies. Earlier this week, Trump said he would shut down TikTok in the U.S. by Sept. 15 unless its local operations are sold to an American company. Microsoft confirmed it was in talks with TikTok for an acquisition.

ByteDance took another blow Friday as Trump signed two executive orders promising to ban Americans from as yet unspecified “transactions” with ByteDance and Tencent Holdings Ltd.

In a pair of vaguely worded orders, Trump threatened to ban “any transaction by any person, or with respect to any property, subject to the jurisdiction of the United States” with the two companies, citing a national security risk of leaving Americans’ personal data exposed. The orders are to take effect Sept. 20.

That falls five days after the previous deadline Trump gave ByteDance to sell TikTok’s U.S. operations to a “very American company” or shut down.

“Trump is intent on banning the entire business of ByteDance, preventing it from growing into a global company,” said a person close to TikTok’s discussions with Microsoft. “The goal is either to force a sale of TikTok or defeat it.”

“If the U.S. government cannot treat us fairly, we will resort to the U.S. courts,” ByteDance said Friday in a statement. “The order sets a dangerous precedent that violates freedom of expression and the principle of open markets. For the past year, we have been seeking to communicate with the U.S. government sincerely and to provide constructive solutions to their concerns. But what we are facing is that the U.S. government disregards the facts … and tries to interfere in negotiations between private companies.”

But challenging the executive orders in court won’t be easy for ByteDance, a lawyer said.

It is still unclear to what extent TikTok and Tencent’s popular messaging app WeChat, which provides chat, financial and third-party services for more than 1 billion users, would be sanctioned under the order. Analysts said it would mean a removal of the apps from Apple’s and Google’s app stores or preventing American telecom companies from providing services for the apps.

But a blanket ban on TikTok and WeChat could be controversial as it may face legal challenges regarding freedom of expression, the lawyer said. There is no law in the U.S. that could prevent American citizens from using certain apps, the lawyer said.