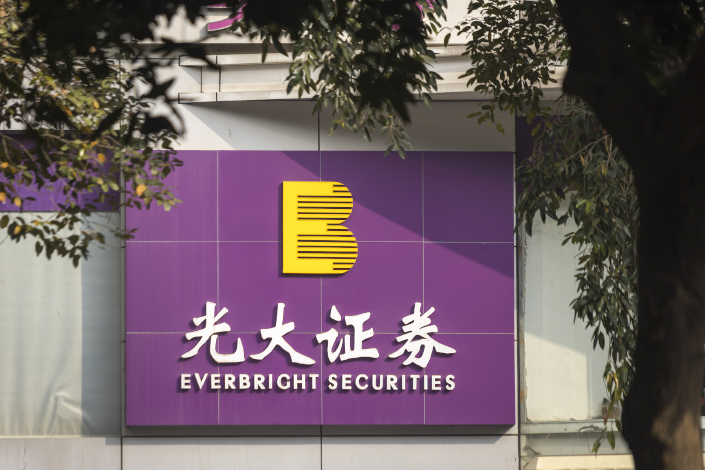 An Everbright Securities branch in Guangzhou, Guangdong province, in 2019.

A Shanghai court has ruled that an Everbright Securities Co. Ltd. subsidiary must pay more than 3.5 billion yuan ($502 million) to cover the losses of its two partner investors from an ill-fated overseas acquisition.

Everbright Capital Investment Co. Ltd., a wholly-owned subsidiary of the state-owned brokerage, shall pay back China Merchants Bank Co. Ltd. 3.1 billion yuan of the latter’s original investment in the acquisition, as well as interest loss and several fees, according to a Sunday filing released on the Hong Kong Stock Exchange, citing a civil judgement from the Shanghai Financial Court.

The court also ruled Everbright Capital must pay back 400 million yuan of Shanghai Huarui Bank Co. Ltd.’s investment plus interest loss and related fees, according to the filing.

Everbright Securities said the payment will not materially affect the company given its sound financial position and sufficient liquidity.

China Merchants Bank and Shanghai Huarui Bank were two senior tranche partners in an investment vehicle that Baofeng Group Co. Ltd. and Everbright Capital set up in 2016 to acquire 65% of MP & Silva Holding SA, a now-bankrupt British sports media company. The deal took place at a time when Chinese companies were scrambling to snap up overseas businesses, many of which subsequently turned out to be duds.

In October 2018, MP & Silva was declared bankrupt and liquidated by a British court. Because the investment vehicle didn’t have MP & Silva’s cofounders sign noncompetition agreements, the cofounders went on to found or invest in other companies and secured rights to major sports events.

The MP & Silva bankruptcy resulted in several lawsuits among the various partners in the deal. The two investing partners, China Merchants Bank and Shanghai Huarui Bank, filed for the 3.5 billion yuan in compensation from Everbright Capital in 2019 for its failure to recoup their investments with promised returns. Everbright Capital also filed its own lawsuit against Baofeng Group at a Beijing court, demanding 751.2 million yuan in compensation.