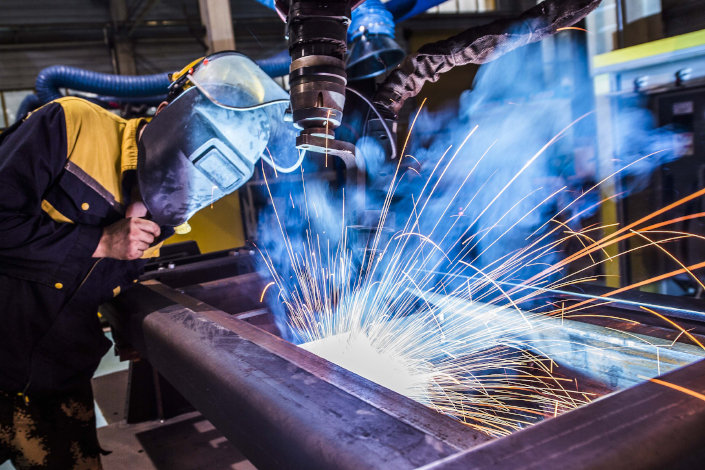 China’s economy continued to recover from Covid-19 in July, major indicators showed, but some analysts warned of weakening momentum as industrial production and consumption performed worse than expected, and unemployment remained elevated.

On the supply side, value-added industrial output, which measures production by factories, mines and utilities, grew 4.8% year-on-year (link in Chinese) in July, unchanged from the previous month, according to data released Friday by the National Bureau of Statistics (NBS). The reading was lower than the median forecast of a 5.1% rise in a Caixin survey (link in Chinese) of economists.

Growth momentum will inevitably slow after a sharp economic recovery in the second quarter when the country resumed large swaths of economic activity, analysts at Macquarie Group Ltd. said.

“In the coming month, for the recovery to continue, the demand side has to catch up,” they said in a note on Friday.

The demand side saw mixed performance in July, as consumption continued to fall behind investment and exports in terms of improvement. Retail sales, which include spending by households, governments and businesses, fell 1.1% year-on-year (link in Chinese) last month, an improvement from the 1.8% decline in June, but worse than the Caixin survey’s median forecast of a 0.5% rise.

Fixed-asset investment, a key driver of domestic demand that includes infrastructure spending, fell 1.6% year-on-year (link in Chinese) in the first seven months. That was an improvement from the 3.1% drop over the first six months, and milder than the median forecast of a 1.8% drop in the Caixin survey.

The improvement in fixed-asset investment last month was driven by property investment, economists at Nomura International (Hong Kong) Ltd. said in a note. Investment in real estate development rose 3.4% year-on-year (link in Chinese) in the first seven months, accelerating from a 1.9% rise in the January-to-June period.

Infrastructure investment, which consists of spending on construction of roads and railways and is generally led by the government, shrank 1% year-on-year in the first seven months, narrowing from a 2.7% decline in the January-to-June period.

Overseas demand continued improving, as goods exports grew 7.2% year-on-year last month, up from 0.5% growth in June and the fastest expansion since December.

The labor market remained weak as China’s surveyed urban unemployment rate stayed at 5.7% (link in Chinese) in July, NBS data show, unchanged from June. In the first seven months, the country only added 6.71 million urban jobs, down 1.96 million, or 22.6%, year-on-year.

Some economists said they expect the economic recovery to continue in the second half of the year, albeit at a slower pace.

The Nomura economists expected the recovery momentum to weaken in the second half-year, as pent-up demand would lose some steam, medical product exports may have peaked, and policymakers appear reluctant to launch a new round of easing for property markets.