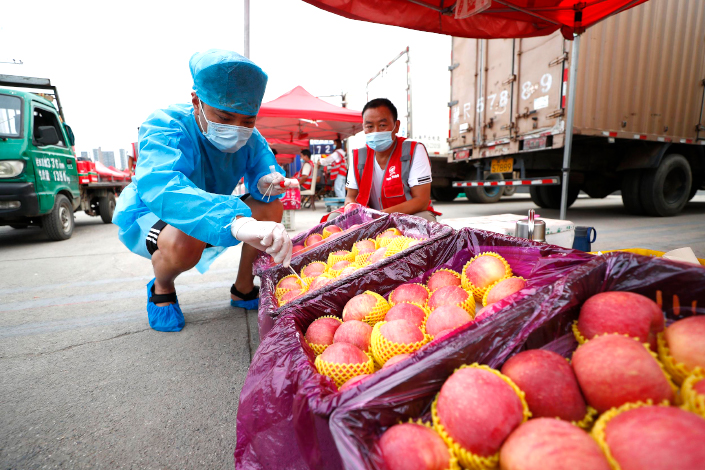 The Beijing Xinfadi Wholesale Market, which made global headlines in June as the source of a still-unexplained coronavirus outbreak that infected 335 people, will reopen Saturday.

The news comes two months after the capital’s largest wholesale market, which is the main local supplier of food to the city, was forced to close on June 13 when it was implicated in a wave of coronavirus cases that struck Beijing, leading authorities to step up citywide quarantine restrictions as part of what they called a “wartime posture.”

Individual retail sales, which accounted for between 10% and 15% of the market’s turnover, will be prohibited, and the market’s merchants will only be able to sell to wholesalers under the reopening plan that local authorities announced on Thursday.

Zhou Xinchun, executive deputy head of the city’s southwestern Fengtai district, where Xinfadi is located, announced at the briefing that prohibiting Xinfadi vendors from selling direct to the public is part of the plan to improve the market’s hygiene standards and deter overcrowding.

A new 1,000-square-meter produce market was established nearby last month to meet the needs of retail customers.

In June, the cases prompted fears that a second wave of Covid-19 could strike China, where the initial outbreak had been brought more or less under control. No new case has been reported with links to the market since early in July, and all patients infected have now been discharged from hospital, with no deaths recorded, a municipal government spokesperson said earlier this month.

The origin of the Xinfadi outbreak remains unknown, according to Wu Zunyou, chief epidemiologist at the Chinese Center for Disease Control and Prevention.

All merchants and wholesalers at Xinfadi will be required to complete real-name authentication before doing business in the market, and all vehicles need to be registered and reviewed by authorities before entering.

In a bid to improve contact tracing, the market watchdog has stepped up efforts in documenting all merchandise with a system that records information about its storage, transport and sale and country of origin.

A supposed link between the outbreak and salmon imported from Europe sent a chill through the global seafood market in June, as consumers across the country turned away in fear and exporters faced stepped-up customs restrictions.

In an interview with the Beijing News in June, Zhang Yuxi, the market’s chairman, had tried blaming a cutting board that had been used to slice imported salmon. But Gao Xiaojun, a spokesman for the Beijing Municipal Health Commission, later said that of 40 different environmental samples from the market that tested positive, “some are from the salmon chopping board, some are not.”

The curious case fueled ongoing concerns that imported goods could seed coronavirus outbreaks, though experts said even if food or packaging was capable of transporting traces of the virus, there was no evidence they could then infect people.