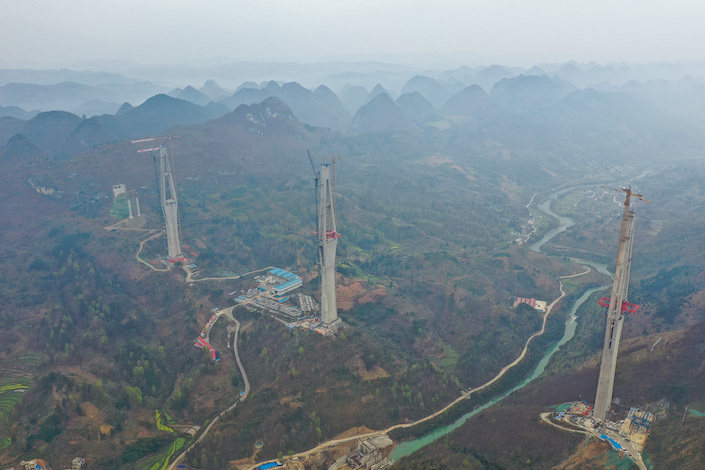 A bridge under construction in Qiannan, Guizhou, in March 2019

The debt-ridden government of Guizhou, one of China’s poorest provinces, is making efforts to restore confidence among bond investors by pledging supportive policies and zero defaults as the debt overhang rises to an officially alarming level in the southwest province.

The provincial government sought to reassure bond investors at a meeting last week by describing measures put in place to ensure repayment of locally issued bonds. In attendance were senior officials from provincial regulatory bodies, the central bank, the Shanghai and Shenzhen bourses and executives from multiple financial institutions.

Guizhou is one of the provinces closely watched by the market for climbing debt levels, although the province hasn’t reported a formal corporate bond default. As of the end of 2019, the provincial government had repayment obligations on 967.3 billion yuan ($139 million) of outstanding debt, the seventh-largest among China’s 31 provincial-level regions. The debt overhang was equal to 146.3% of the provincial government’s overall fiscal capacity, ranking at the top and far exceeding the 100% red line set by the Ministry of Finance.

At the meeting with investors, Deng Chenghong, deputy chief of Guizhou’s financial supervision and administration bureau, said the province will take effective measures to ensure repayments of bonds from local issuers.

“There won’t be a single default,” Deng said.

“It is clear that Guizhou strives to support local bonds as it affects the province’s financing capacity,” a bond investment manager said. “Such official backing is helpful to local bond issuance, but investors are still awaiting concrete measures” that could provide new funding to improve the province’s capital condition, the manager said.

This was not the first time Guizhou officials stepped in to support local bonds. In October 2019, Guizhou Vice Governor Tan Jiong met with bond investors at the Shanghai Stock Exchange and pledged supportive policies to ensure repayment. The meeting came amid rising market concerns over Guizhou’s financial condition and debt risks after delayed payments last year.

Guizhou is among seven Chinese provinces that haven’t recorded a corporate bond default, according to Deng. But industry experts warned of mounting risks as several cities in Guizhou reported delayed repayment for nonstandard credit products such as trust loans.