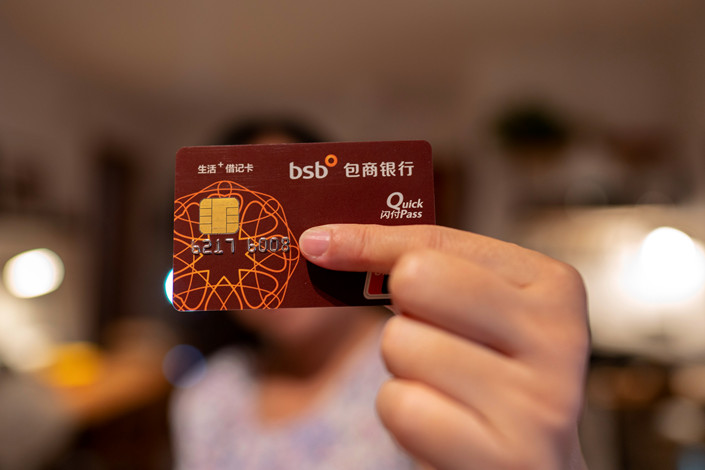 China’s decision to allow embattled regional lender Baoshang Bank to file for bankruptcy marks an important development in the country’s financial sector, which for decades has rarely experienced a bank failure.

Inner Mongolia-based Baoshang, which was 89% owned by private conglomerate Tomorrow Holding Co. Ltd., was taken under state custody last year amid severe credit risks. The bank was found to have a financial black hole of 220 billion yuan ($32 billion) due to massive fund misappropriation by its largest shareholder.

While some of Baoshang’s good assets were taken over by two lenders, the rest of the bank’s assets including shareholders’ equity and some creditors’ rights will be liquidated, the central bank said. The decision followed regulators’ years-long efforts to combat financial market risks stemming from shadowy borrowing activities of sprawling conglomerates. It also came as China’s financial industry faces greater challenges from continued economic slowing and fallout from the pandemic.

The collapse of Baoshang reflects corporate governance failures in financial institutions that fed corruption and misconduct, sending a warning shot to many small and midsize banks, regulators said.

As regulators move to find a balance between pro-growth policies and financial risk control, there will be more institutions to follow Baoshang in being allowed to fail, Wang said.

Here are five things to know about Baoshang’s failure and its implications for China’s financial market.

Why is the Baoshang failure significant?

The Baoshang bankruptcy marks China’s first commercial lender to be liquidated through judiciary procedure. Authorities have long been reluctant to allow banks to fail because of concerns over the social impacts. In 1998, Hainan Development Bank became the first commercial bank in China to be forced to close due to capital inadequacy. But the Hainan bank never entered bankruptcy proceedings in the absence of related laws at that time. The bank’s assets were disposed of in accordance with administrative rules.

China’s Enterprise Bankruptcy Law, which took effect in 2007, lays the legal groundwork for financial institutions, including banks, brokerages and insurers, to file for bankruptcy. The Law of Commercial Banks also regulates bankruptcies of banks.

In the Baoshang case, the central bank said the institution will file for bankruptcy and “the equity of its original shareholders and unprotected creditors’ rights will be liquidated in accordance with law.” The move indicated a major step toward China’s long-sought goal of creating an exit mechanism for banks under market rules, analysts said.

The cleanup of troubled Baoshang also marks a crucial step forward in regulators’ years-long efforts to dismantle the risky assets of Tomorrow Holding, a sprawling conglomerate once controlled by fallen tycoon Xiao Jianhua. As one of the high-profile targets in China’s financial risk crackdown, Tomorrow used a massive web of affiliates to control financial institutions and misappropriated huge amounts of funds to serve its own interests. Overwhelmingly controlled by Tomorrow, Baoshang was a main fundraising platform of Tomorrow and created the most dangerous risks.

Regulatory inspection of Baoshang’s assets found that from 2005 to 2019 the bank extended 156 billion yuan ($22.4 billion) of illegal loans to 209 shell companies controlled by Tomorrow. All of them ended up becoming nonperforming. The bank’s management embezzled an additional 50 billion yuan. Assets were gradually chipped away, resulting in severe financial and operational risks and violating the interests of other shareholders and all depositors, regulators said.

Regulatory inspection after the bank was taken over found a 220 billion yuan capital shortfall, mainly caused by bad loans to Tomorrow and its affiliates.

Loan business with Tomorrow-linked companies had always been granted priority at Baoshang, with no proper risk controls, sources from the bank said. Even as most of the loans turned nonperforming, the bank never pursued the defaulters, they said.

The bank was controlled entirely by the major shareholder and insiders who had captured local regulators, leading to corporate governance failures and miring the whole operation in corruption and lawbreaking, said Zhou Xudong, former director of the central bank’s general office who led the Baoshang takeover team, in a commentary.

Why did the bankruptcy happen now?

China’s economy has embraced profound changes since 2015 as governments’ debt burden mounted after years of expansive spending. Meanwhile, the country’s monetary structure shifted to rely more on commercial bank loans and bond purchases to adjust market liquidity instead of directly via the central bank. That means the quality of corporate borrowing and bank assets becomes more decisive as a reflection of the economy’s liquidity condition.

Who paid for Baoshang’s losses?

According to the central bank, regulators originally planned to invite strategic investors to bring in new capital to help in Baoshang’s restructuring. However, new investors were unwilling to participate because of the bank’s hefty risks. To restore investor confidence, authorities deployed about 170 billion yuan of public funds, including money from the national deposit insurance fund, the central bank’s relending and other liquidity tools.

Part of the money was injected into the newly formed Mengshang Bank to take over Baoshang’s Inner Mongolia-based operations and wealth management business. The national deposit insurance fund provided 34.4 billion yuan to Huishang Bank to help cover losses from buying the rest of Baoshang’s good assets. The fund also acquired Baoshang’s 150 billion yuan of Tomorrow-related bad loans based on market value. In addition, the central bank provided 80 billion yuan of relending and 23.5 billion yuan of liquidity support through a standing lending facility.

The equity of Baoshang’s shareholders, totaling 31.8 billion yuan according to regulators’ inspection, will be wiped out, according to the central bank.

What losses did Baoshang’s creditors and customers suffer?

According to the central bank, the deposit principal and interest of all individual Baoshang depositors were fully repaid by the central bank’s national deposit insurance fund. Corporate clients with less than 50 million yuan of deposits or debts with the bank were also fully protected.

Bigger creditors had 90% of their debts repaid, compared with less than 60% on average without state intervention, the central bank said. Caixin learned that big creditors incurred total losses of about 30 billion yuan.