By Zheng Lichun and Anniek Bao 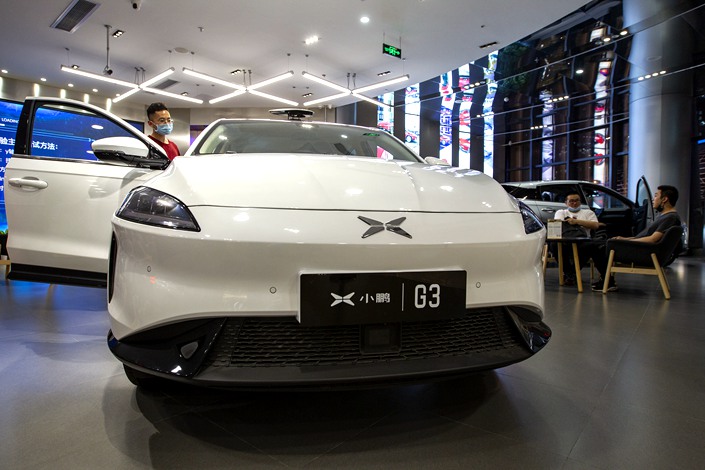 Customers take a look inside an Xpeng G3 in Shanghai on June 6.

Chinese electric-car startup Xpeng Inc. is seeking to raise up to $1.27 billion in its IPO on the New York Stock Exchange (NYSE), the latest Chinese firm to take advantage of investor enthusiasm for the industry.

Xpeng plans to sell 85 million American depositary shares (ADS) priced between $11 and $13 per share, allowing it to raise some $1.1 billion if they are priced at the top of the range, according to the IPO prospectus it filed to the U.S. Securities and Exchange Commission last week. The prospectus also provides an over-allotment option to sell another 12.75 million shares if investor demand proves strong, meaning the firm could raise more than $1.27 billion in total.

JPMorgan Chase is the book runner on the share sale, which is also being underwritten by Credit Suisse Group AG and BofA Securities.

Xpeng follows in the footsteps of Nio Inc., which listed on the NYSE with a $1 billion IPO in 2018, and Li Auto, which raised $1.1 billion in its Nasdaq debut at the end of July. The three highflyers are among China's most successful electric-vehicle (EV) startups, each valued between $10 billion and $12 billion.

The country became the world’s largest market for electric cars in 2015, after years of generous state subsidies to foster the industry’s development. The government handouts created a boom that drew in more than 100 EV startups.

The biggest among them hope to compete against the likes of titan Tesla Inc., the world’s most valuable carmaker, which has established a secure foothold in China. The company added to mounting competitive pressure in China’s white-hot EV sector by opening its third Gigafactory in Shanghai, which delivered the first domestically assembled Model 3 vehicles to customers in December.

Despite buoyant investor interest in the technology, China’s EV startups have struggled to turn a profit amid massive spending on marketing, research and production. During the first six months of this year, Xpeng reported losses attributed to ordinary shareholders of 2.1 billion yuan, after losing 4.6 billion in 2019 and 2.3 billion the previous year. Nio likewise recorded net losses of 1.7 billion yuan in the first quarter before managing to turn a profit for the first time in the second quarter, selling a record 10,000 cars for a gross profit margin of 9.7%.

Li Auto, on the other hand, managed to make a gross profit margin of 13.3% before going public thanks to the extended-range technology used in its cars, which allows it to spend significantly less on production materials than its competitors.

Other Chinese EV startups are searching for ways to lower their costs, with both Xpeng and Nio planning to roll out new vehicles that share key components and parts with each company’s previous models, allowing them to save on production and research and development.