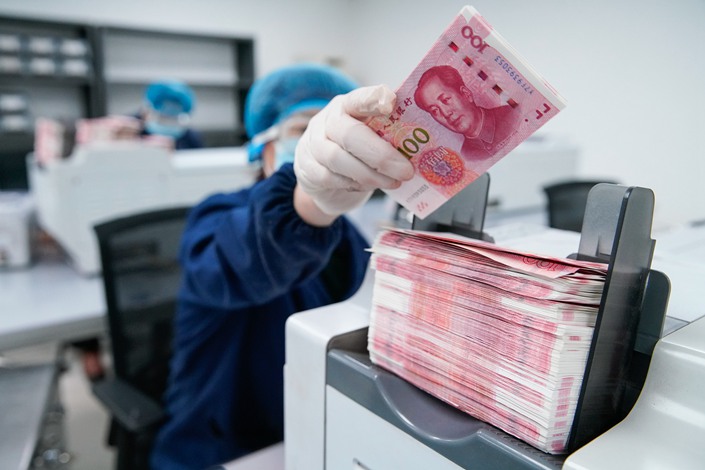 Financial authorities have come up with more ways for banks to replenish the highest-quality capital they have to absorb losses.

China’s financial regulators are considering expanding the types of instruments struggling small and midsized banks can sell to local governments to raise capital, to make it easier and quicker for them to strengthen their balance sheets and boost credit to businesses, sources familiar with the issue told Caixin.

In July, China announced it would allow 18 provincial-level governments to use up to 200 billion yuan ($28.9 billion) in total from this year’s 3.75 trillion-yuan quota of special-purpose bonds (SPBs) to inject funds into banks in their jurisdictions that need support. At the time, the government only specified one channel for investment — convertible bonds, which banks can use to replenish their core tier-one capital, the highest-quality capital that a bank has to absorb losses.

But financial authorities have now come up with more ways for banks to get the money. These include selling bonds, usually subordinated debt, to replenish what’s known as Tier-2 capital, the second layer of a bank’s capital requirements that’s less secure than the top Tier-1 capital. Regulators are also proposing a new type of instrument based on the traditional bank deposit agreement, or bank investment contract (BIC). It isn’t yet clear how the new channels, if approved by the government, will be implemented.

Under this type of arrangement, an investor agrees to keep a deposit in the bank for a fixed amount of time and the bank offers a guaranteed rate of return on the funds. The terms of the BIC, including the amount of funds and the interest rate, are negotiated by the two sides and not governed by the official interest rate. Currently, only a limited number of institutions, including insurance companies and the National Social Security Fund are allowed to sign BICs with banks.

Regulators are now mulling whether to allow local governments to set up such agreements, but with an additional twist — allowing the deposits to be converted into shares. It’s not yet clear what tier of capital the funds raised via this method would replenish. It’s likely to be Tier-1, which consists of shareholder equity and retained earnings, although if the equity is some type of hybrid instrument, it may be classified as Tier-2.

This new use of the BIC, if approved by policymakers, would be a first in China; such deposits have never previously been converted into shares.

The new instruments under consideration by regulators underscore the government’s concerns that local banks, a major source of credit for small businesses, aren’t being recapitalized and that this is affecting their ability to provide financing to micro, small and midsize enterprises (MSMEs). Policymakers have this year stepped up efforts to channel more funding to MSMEs to help tide them over the economic slump triggered by the Covid-19 pandemic. Many companies are struggling with cashflow problems and funding difficulties and the government is determined to prevent a wave of bankruptcies and layoffs.

Premier Li Keqiang said at a State Council meeting in July that “one of the outstanding difficulties faced by small and midsize banks today is insufficient capital and limited ability to issue loans.”

Regulators are believed to be considering new ways to help banks replenish their capital because of obstacles related to the issuance of convertible bonds. Traditionally these have been issued mainly by listed banks and unlisted lenders have rarely made use of them and don’t have a license to sell such debt. The procedure to apply for a permit to sell this type of debt is time consuming as both the banking and securities regulators need to examine the applications, which means it may be difficult for some small banks to raise funds in a timely manner.

Whether converting bank deposits into shares is practical, a source in the asset and liability management department of one bank told Caixin that from a banking perspective there were no obvious barriers. “Just as bonds can be convertible into equity there’s no theoretical reason why a deposit agreement couldn’t also be convertible.”