Independence Is Not a Solution for Hong Kong, Outgoing British Ambassador Says 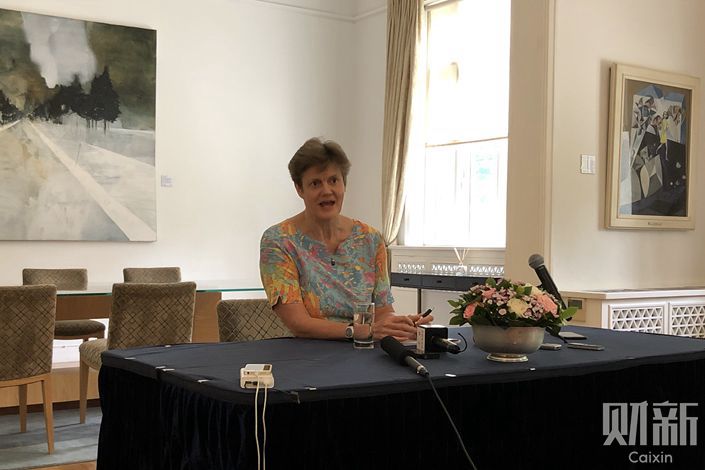 Independence is not a solution for Hong Kong, but the national security law imposed on Hong Kong two months ago is a particular concern that Britain has about the city’s future, said Barbara Woodward, the outgoing U.K. ambassador in China.

“It’s important to emphasize the areas where the U.K. and China agree on Hong Kong,” Woodward said in response to questions about Hong Kong at her last press conference for Chinese media last week.

Despite the number of areas of agreement in regard to Hong Kong, there are two things in particular that Britain has concerns about, Woodward said. Its top concern is that the national security law may have undermined the high degree of autonomy promised under the Sino-British Joint Declaration signed in 1984, which is seen as an international treaty. In addition, Britain is concerned that the implementation of the new law may interfere with multiple elements of freedom for Hong Kong, including academic freedom, press freedom and freedom for elections.

At the end of June, the Chinese government passed and enacted national security legislation for Hong Kong, which has been embroiled in about a year of social unrest. The swift passage of the legislation came a day ahead of the 23rd anniversary of the U.K.’s handover of Hong Kong to China on July 1, 1997, and was put into effect immediately.

In late July, the British government released a detailed plan saying people in Hong Kong with British National Overseas status would be granted a special path to obtain U.K. citizenship starting in 2021, as part of the nation’s response to China’s decision to impose a national security law on Hong Kong.

China’s foreign ministry opposed such a policy as interfering in domestic affairs, and a week later announced that it had suspended Hong Kong’s extradition and mutual legal assistance treaties with Britain, Australia and Canada in a retaliation for the three countries’ decisions to halt extraditions to the special administrative region.

Faced with the disputes between China and the U.K. over Hong Kong, Woodward said it is vital to continue working to build up trust and understanding, as she was particularly struck by remarks that the Chinese ambassador to the U.K., Liu Xiaoming, made about the deficit in trust and understanding in a recent interview with Global Times, a state-run Chinese newspaper.

However, Liu also told the Global Times that the U.K. no longer has any sovereignty, jurisdiction or right of “supervision" over Hong Kong, and the U.K. should not use the Sino-British Joint Declaration as an excuse to make irresponsible remarks about Hong Kong and interfere in China’s internal affairs.

The areas where the two nations agree on Hong Kong should be the basis for continued discussions about the areas where China and the U.K. disagree, Woodward concluded.

Woodward will finish her five-year term as British Ambassador to China by the end of this month before heading to New York to be the new U.K. Permanent Representative to the United Nations.

Caroline Elizabeth Wilson, who headed the British Consulate-General in Hong Kong from 2012 to 2016, will take over for Woodward leading the U.K.’s Embassy in Beijing next month.